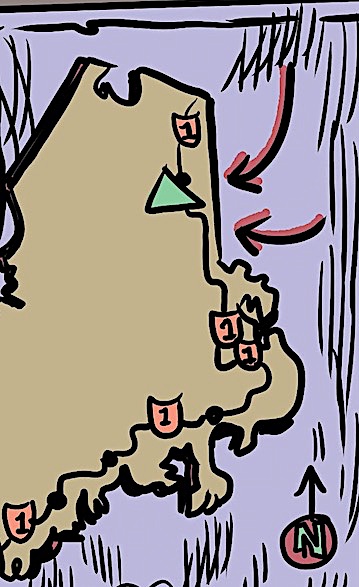 Michelle Souliere noticed a void. She felt that Maine's weirdness was being ignored.

In 2016, Souliere shared her personal journey towards "strangeness" with the Lewiston Sun Journal's Mark LaFlamme:

I sensed a void, and had lots of material to fill it with. I had read Loren Coleman’s Mysterious America, Joseph Citro’s Weird New England, William Robinson’s Abandoned New England. I was fired up! I wanted to know if I could I find out more about our own Maine urban legends, hauntings, weird history and personalities.

By 2005, Souliere had begun her blog Strange Maine, and soon after, a print version, the Strange Maine Gazette. 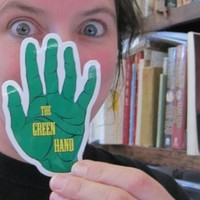 On November 6, 2009, her bookstore, The Green Hand opened at 661 Congress Street, Portland, Maine, and gave her a foundation location in Portland from which her art, research and writings grew. 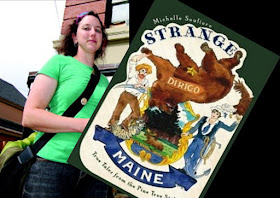 In 2010, Michelle Souliere published her first book, Strange Maine: True Tales from the Pine Tree State. Soon after, I asked her to join me in writing Bigfoot in Maine, after the publisher asked me to pen that book. But I was overwhelmed with book projects, and soon was delighted to turn the entire title over to her. For almost a decade Souliere has been working on the historical and contemporary sightings of large forest giants in Maine. 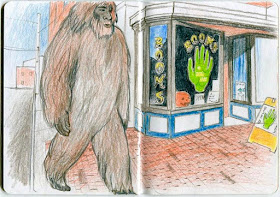 Conducting research for her Bigfoot book, Souliere has traveled extensively throughout the State of Maine.

In 2006, Michelle Souliere, in her blog Strange Maine, hinted at a mysterious area, called a "triangle" or "window area" by Forteans and ufologists, in the upper tier of Maine. She was learning more and more about it, sometimes as reflected in popular culture. She wrote:


a television show, made in Northern Maine, that is currently [in 2006] running on over 50 public access stations across the country. Dark Currents [was] its name.

The Story takes place in the fictional town of Hawks Landing and in an area that is a magnet for strange events and even stranger characters. At one time, HAWKS LANDING was an Indian village. The area is filled with old stories and legends. The land between the river and the town is kind of a "Bermuda Triangle" for Maine. The town itself is supposedly cursed. One Indian tale told of an Indian chief saying "The Matawahoc river shall run Dark Currents as long as the white man lives on it."

Like most home-grown shows, Dark Currents exists on a meager budget, and is produced predominantly on the enthusiasm of its staff, to the delight of a small cult following in New England, according to their site.

By 2006, the show was gone, and yet Michelle Souliere pursued the notion of this "triangle" area in her research.

In June 2019, cartoonish/journalist Andrew Greenstone captured a lecture that Souliere had given at the Third Annual International Cryptozoology Conference in September 2018. He recorded his impression of the talk via a cartoon overview. 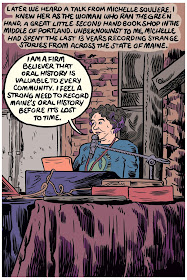 "Of the stories I've heard, a number of them all take place in this little triangle in the northeast quadrant. Ten miles at its base and 25 miles tip-to-tip in this isolated area around US Route 1," Michelle Souliere said in her lecture. On the screen in the background, a map of Maine showed the little triangle. 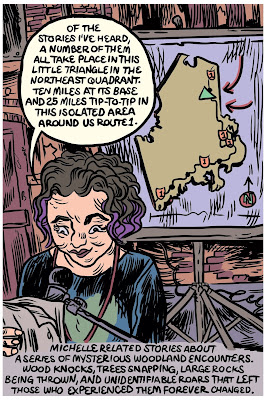 These all can be linked to Sasquatch/Windigo/Wendigo/Bigfoot characteristics, but Souliere is correct in merely pointing to the collective unexplainable nature of these pieces of evidence. No telling what is making all these signs, but what may be more intriguing is that Souliere has discovered a concentration of such reports in one specific area.

Comparing Greenstone's rendering of Souliere's map and where the Triangle is located, you will see the dot is southeast of the little town of Presque Isle. The location of this anomalous area is larger than it looks and near Presque Isle.

Presque Isle is the headquarters of the Aroostook Band of Micmac, a federally recognized tribe, with, at last estimate, a population of 960. Like their kin in Canada, the Micmac in Maine would rather be termed Mi'kmaq. Since the 1980s, the Miꞌkmaq consider the spelling Micmac as "colonially tainted." Lnu (the adjectival and singular noun, previously spelled "L'nu"; the plural is Lnúk, Lnuꞌk, Lnuꞌg, or Lnùg) is the term the Miꞌkmaq use for themselves, their autonym, meaning "human being" or "the people".

The Miꞌkmaq or Miꞌgmaq (also Micmac, Lnu, Miꞌkmaw or Miꞌgmaw) are a First Nations people indigenous to Canada's Atlantic Provinces and the Gaspé Peninsula of Quebec as well as the northeastern region of Maine. They call their national territory Miꞌkmaꞌki (or Miꞌgmaꞌgi). The nation has a population of about 170,000 (including 18,044 members in the recently formed Qalipu First Nation in Newfoundland), of whom nearly 11,000 speak Miꞌkmaq, an Eastern Algonquian language. Once written in Miꞌkmaq hieroglyphic writing, it is now written using most letters of the Latin alphabet.

After Greenstone's cartoon panels were published on July 5, 2019, they were spread around Facebook by various folks who were at the conference. Soon a discussion took place on Michelle Souliere's FB page. I was startled that the location was nameless, and commented that only the "faint of heart" do not venture forth to name events, creatures, and locations.

So, for the stake of gathering all the comments on the topic, I named this weird new spot that Michelle Souliere had discovered The Aroostook Triangle, for after all, that's what it is.  Of course, if it becomes known by some other moniker from Souliere or other commentaries on this weird wonder, so be it. 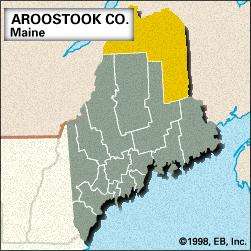 This triangle, like Aroostock County itself, is sparely populated. Formed in 1839, Aroostook County has the largest area of any county in New England, and Maine residents often call it “the” county. The Britannica says its name is derived from a Mi’kmaq word meaning “clear,” or “beautiful water.” Some others, like Your Dictionary, say the meaning is "unknown," which would fit well with the stories behind this "Triangle." 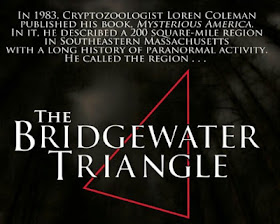 The actual coining of the term "Bermuda Triangle" seems to point to Vincent Gaddis, a Fortean friend of Ivan T. Sanderson and correspondent of mine too. In the February 1964 issue of Argosy, Vincent Gaddis' article "The Deadly Bermuda Triangle" used the phrase widely for the first time. Sanderson wrote the well-known followup article, "The Twelve Devil's Graveyards Around the World," in 1972, for Saga magazine.

Based on their inspiration, the name "Bridgewater Triangle" was coined in the late 1970s (circa 1976) by yours truly, Loren Coleman, when the phrase was published for the first time in the April 1980 article of the same name in Boston Magazine, and in the 1983 book, Mysterious America (Faber and Faber, 1983; now in the revised 2007 Simon & Schuster edition). A local newspaper published the name "The Bridgewater Triangle" after I gave a Bridgewater area library lecture using the phrase in the late 1970s, in the Bridgewater area.

Some are small, like the Aroostook Triangle. Others are huge. 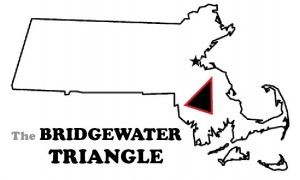 There is a lot to absorb from these triangles.  And I'm sure Michelle Souliere has a great deal to share about the Maine's special spot too. 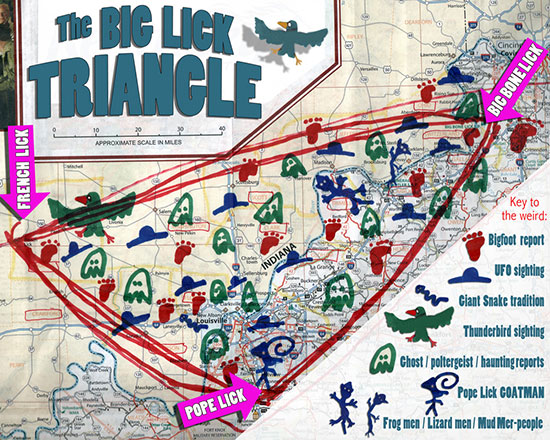 Michelle Souliere's forthcoming Bigfoot in Maine book will have much to say on the Aroostook Triangle. 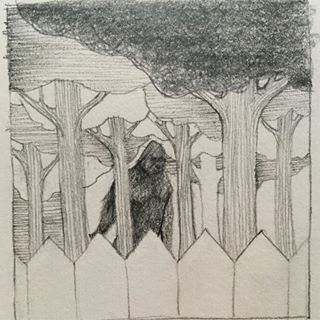 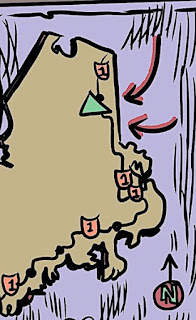