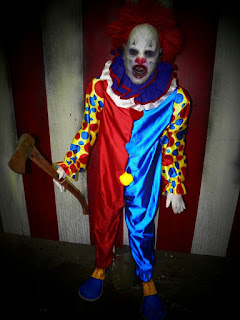 Following in the tradition of my list from 2008, my notes on evil clowns (and Joker clones) that turned up in 2009, my documenting of real killer clowns in 2010, my list of evil clowns of 2011, weirdness in 2012, another compilation for 2013, and the creepy clown reports in California, countrywide in the USA & in France, ending up back in Aurora for 2014, here is a "top ten" gathering of "evil clown" stories for 2015. 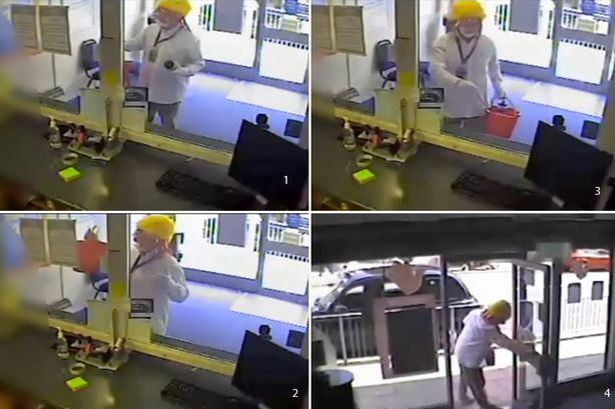 Crooks dressed as clowns carried out a string of crimes in Merseyside and police have dealt with 14 incidents - from armed robbery to bogus charity collections - involving people wearing face paint and circus costumes, they reported at the end of the first month of the year.

One of the crimes was caught on camera, when a robber strolled into a currency exchange shop in Walton wearing a yellow wig, white face paint and a pink prosthetic nose and forced a terrified worker to hand over bundles of notes.

Another victim had an egg thrown at his car by a yob wearing a clown mask, reports the Liverpool Echo. 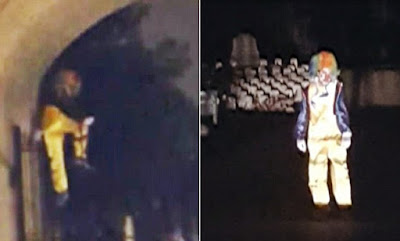 Early in July 2015, a Chicagoan took a cellphone video of a person dressed in a clown suit, trespassing at the city's historic Rosehill Cemetery in the dead of night. Julia Graham says she was “freaked out” at the figure as it ran toward the main gate. She and her husband were driving by around 10 p.m.

“When we get closer, we realize it’s a clown, which is super weird,” Graham said.

The first picture her husband snapped was of the clown scaling the 7-foot-tall gate at the Ravenswood Avenue entrance. That feat is no easy task, especially for someone wearing a clown suit. The North Side cemetery was clearly closed and locked for the night. Officials don’t know what to make of it because other than the trespass there were no complaints of vandalism. 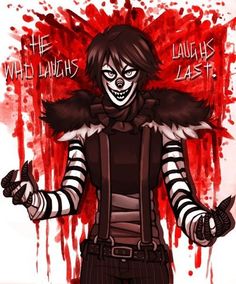 In July 2015, a 12-year-old Elkhart, Indiana girl fatally stabbed her stepmother, and said an online horror story clown named “Laughing Jack” (pictured) told her to do it, it was revealed in court documents in November. The girl set her family’s apartment on fire and stabbed Maria Torres “at the direction of a fictional character found on the CreepyPasta website known as 'Laughing Jack.’”

Laughing Jack is a clown who befriends children as their imaginary friend before slicing them open and replacing their organs with candy, according to Urban Dictionary. The unidentified Elkhart girl “heard voices and had an 'alter ego' months before the stabbing and begged her father for help,” the court documents said. 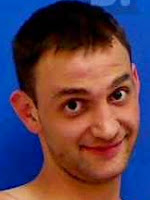 On Friday, August 7, 2015, a woman living in the 1300 block of 20th Avenue NE in Hickory, North Carolina, reported to police that at 4:32 a.m. a clown with an ax knocked at her residence. The suspect then began swinging an ax and attempted to cut the victim. The clown was wearing a mask and a multicolored wig. She was able to remove his mask and recognized him as an acquaintance before he left, according to the Hickory Daily Record. An arrest warrant was issued. Jimmy Daniel Raybon (pictured above), 28, also known as Robert Gross, turned himself in without incident at 2:15 p.m. 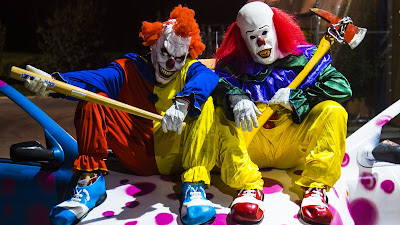 Some people thought it was funny, but it is amazing no one shot the "killer" clowns that were scaring folks around the Las Vegas Valley in September of this year.

Matteo Moroni, the famous prankster behind DM Pranks in Italy, teamed up with Fright Dome-owner Jason Egan to bring the "killer clowns" to Nevada. They set up "crime scenes" with creepy clowns nearby and waited for real people to walk into the situations.

In the video, the clowns hang out in a gas station, the long hallways of Circus Circus and in an ambulance behind the hotel-casino. Each time an unsuspecting person or group walks into the created scenario and are scared almost into having heart attacks. Not funny. 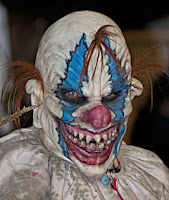 "Clowns in vans chasing terrified children spark warning 'go straight home after school today and not to loiter,'" reported the Daily Mirror. ""Police are investigating after numerous reports of kids being approached by people wearing clown masks driving a van."

Phantom Clowns stalked St. John's Road in Kent. The incidents started after several reports in Tonbridge. On October 5 in Hectorage Road, pupils reported they were scared by people in clown masks.On October 7 and 8 there were also reports of a woman in the High Street wearing a clown mask. The following week in Tunbridge Wells, on October 13 and 14 there are reports of people wearing clown masks in a van on St John's Road. Some witnesses said the clowns wore black clothing and white masks.

No one was ever caught. (These are the classic Phantom Clowns that I discussed in Mysterious America.) 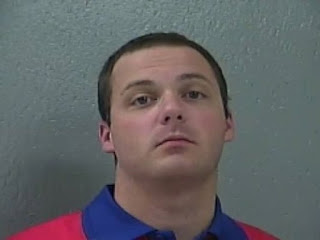 Police say they arrested a 30-year-old man on October 15, after he dressed as clown, carried a toy gun onto Baptist Bible College in Springfield, Missouri, and claimed he had a bomb and was going to take a hostage. James D. Robertson (pictured) was charged with making terroristic threats. Police found Robertson in a parking lot at the college. He told them he was formerly a student at the college and wanted to return but school officials ignored him. Robertson told police he dressed like a clown and carried a toy gun in order to make school officials pay attention to him. They did. Robertson did not have a car bomb. In the trunk of his car, police found a bag of charcoal with a note that said: "This is my CAR bomb!" 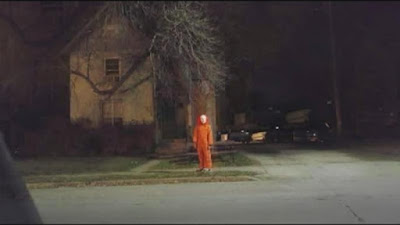 This turns out to be merely unsettling, not evil. Around Thanksgiving 2015, the media began noting there were sightings of a man dressed up as a clown walking around Carroll University campus, Waukesha, Wisconsin. Some people, who said it was "creepy," took photographs. Waukesha police say they know who it is. Waukesha police told the local media the teenage boy is "developmentally delayed and is just doing this to see people's reaction. Both he and his parents were advised several times it would really help us out if he wouldn't stand out there doing that."

Police say they aren't aware of any crimes the teen has committed. 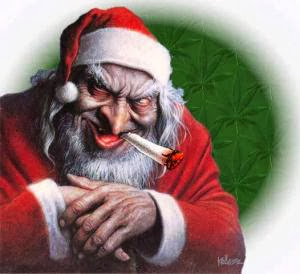 The ultimate costumed clown around Christmas, of course, is Santa Claus. In 2015, an evil Santa emerged near Denver. A stabbing suspect was on the loose Christmas Eve in Lakewood, Colorado, after allegedly stabbing a bus passenger early Thursday morning, December 24, 2015. At around 1 a.m., two people were riding an RTD bus when they got into a fight that ended when one of the passengers -- who police say was wearing a Santa Claus jacket -- stabbed the other. The suspect remains on the run. (For an infamous recent Killer Santa case, see the 2013 Pardo-Corvina story.) 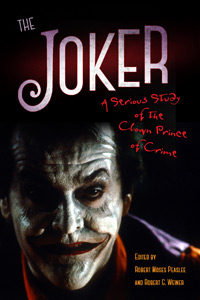 American University Press published a book of some note on the subject of evil clowns. Appearing in 2015, The Joker: A Serious Study of the Clown Prince of Crime, edited by Robert Moses Peaslee and Robert G. Weiner, is the first academic work to provide a comprehensive study of this villain dressed like a clown, illustrating why the Joker appears so relevant to audiences today.

In a related vein, Suicide Squad is an upcoming American superhero film based on the DC Comics antihero team of the same name. It is scheduled to be released on August 5, 2016. One of the most significant characters in the forthcoming movie is the Joker, being played by Jared Leto. During 2015, photos of Leto as the new Joker caused quite a stir. 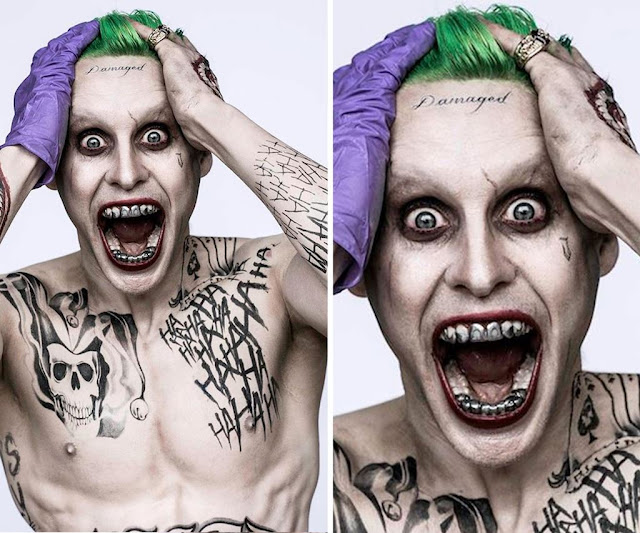 Donate to support this blog. Thank you.

Interesting movie that also, came out this year: Clown - https://youtu.be/xLa1QWPI1JY

Here's a clown story to start of 2016!
http://www.thesmokinggun.com/documents/bizarre/meth-smoking-clown-at-waffle-house-213986