Why did the Austin bomber set off his bombs? It appears to be a question that will linger for days.

One clue may exist in the map, and various maps of the bombing in context have been created. 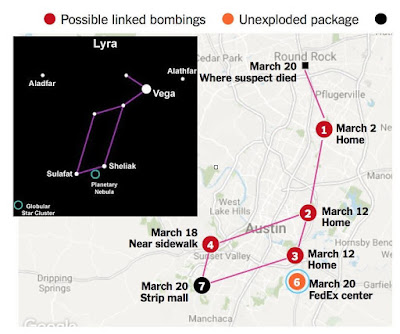 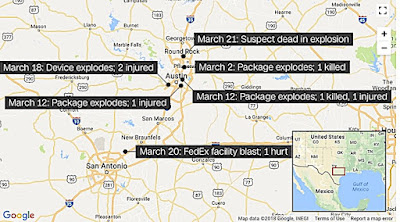 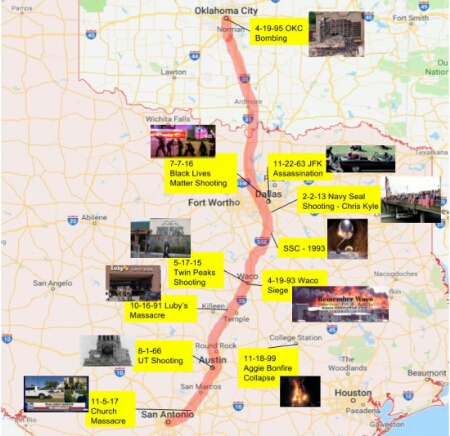 A man who police believe carried out a string of package bombings in Austin is dead, putting an end to a weekslong hunt to track down and stop the bomber who had the Texas capital and its residents on edge. 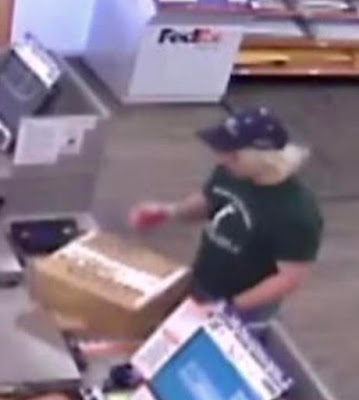 Conditt at the FedEx counter.


Law enforcement officials, who identified the suspect as 23-year-old Mark Anthony Conditt, said they traced the white male to a hotel in the Austin suburb of Round Rock, about 20 miles north of the city. In a confrontation with the police, the suspect detonated a device and died, Austin Police Chief Brian Manley said. Shots were fired during the encounter with police. 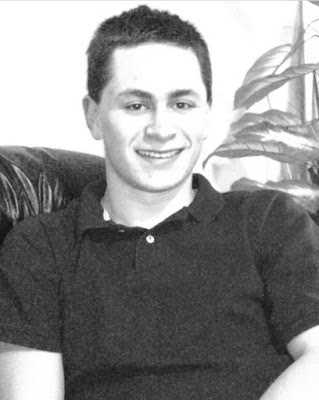 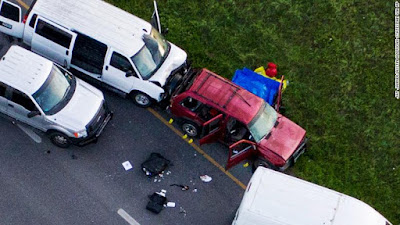 Conditt detonated one final bomb in his car. 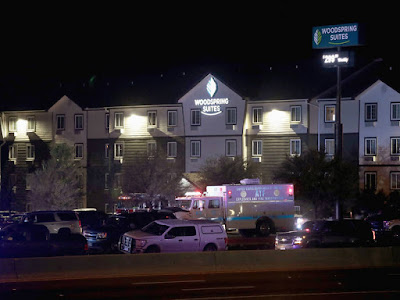 The Round Rock motel where Conditt was staying.

Blew himself up after police chase early Wednesday morning.

“I have this idea I haven't been putting out publicly...but screw it. The guy doesn't have time to watch FB with all he's doing. If you didn't catch, the 3rd one was meant for Erica Mason, across the street from the lady who's doorstep it was on (she was carrying it to her). 1st was House family, son of Rev. Dixon. 2nd and 3rd--Mason. "Mason-Dixon" as in line :-( and 4th was on a street that was hidden well enough from traffic to set it up...traffic from the feeder street, Republic of Texas Blvd. So...yeah.” ~ Debbie Russell (with comments)

Mark is a common male given name and is derived from old Latin "Mart-kos", which means "consecrated to the god Mars", and also may mean "God of war" or "to be warlike". Marcus was one of the three most common given names in Ancient Rome. See Roman given names.

Aries dates in astrology are March 21 to April 19. If your birthday falls in this date range, you have an Aries Sun sign. Although Aries horoscope birth dates can change depending on the year, these are typically the Ariescalendar dates. For about 30 days each year, the Sun travels through the part of the zodiac occupied by ...

Marcus Antonius (Latin: M·ANTONIVS·M·F·M·N; January 14, 83 BC – August 1, 30 BC), commonly known in English as Mark Antony or Marc Antony, was a Roman politician and general who played a critical role in the transformation of the Roman Republic from an oligarchy into the autocratic Roman Empire.

Antony was a supporter of Julius Caesar, and served as one of his generals during the conquest of Gaul and the Civil War. Antony was appointed administrator of Italy while Caesar eliminated political opponents in Greece, North Africa, and Spain. After Caesar's death in 44 BC, Antony joined forces with Marcus Aemilius Lepidus, another of Caesar's generals, and Octavian, Caesar's great-nephew and adopted son, forming a three-man dictatorship known to historians as the Second Triumvirate. The Triumvirs defeated Caesar's murderers, the Liberatores, at the Battle of Philippi in 42 BC, and divided the government of the Republic between themselves. Antony was assigned Rome's eastern provinces, including the client kingdom of Egypt, then ruled by Cleopatra VII Philopator, and was given the command in Rome's war against Parthia.

Condit(t) may be a topographical name for a dweller by a water channel, from the Old French word "conduit," Middle English "condit, cundit," which was originally an artificial channel or pipe for conveying water, and later was the term applied to a structure from which water was distributed, a fountain or pump. Source

Not to be confused with the planet Mars.
Mars: Pater of the Roman people, Guardian of soldiers and farmers, God of War, Destruction and Masculinity 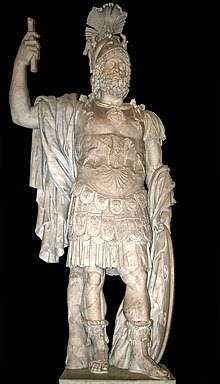 The Statue of Mars from the Forum of Nerva, 2nd century AD, based on an Augustan-era original that in turn used a Hellenistic Greek model of the 4th century BC, Capitoline Museums
Symbol The spear of Mars ♂ (Spear and shield iconography)
Personal information
Consort Nerio and others like Rhea Silvia, Venus, Bellona
Parents Jupiter and Juno
Siblings Vulcan, Minerva, Hercules, Bellona, Apollo, Diana, Bacchus, etc.
Greek equivalent Ares

In ancient Roman religion and myth, Mars (Latin: Mārs) was the god of war and also an agricultural guardian, a combination characteristic of early Rome. He was second in importance only to Jupiter and he was the most prominent of the military gods in the religion of the Roman army. Most of his festivals were held in March, the month named for him (Latin Martius), and in October, which began the season for military campaigning and ended the season for farming.
+++
h/t SL, SM, CLK, SH
Posted by Loren Coleman at 10:06 PM

The Interstate 35 pic was created by my girlfriend. But it wasn't created since the Austin bombings began but a couple of months ago. Seen this one coming for a while now.

Since you left no way to contact you except through this fashion...

Where and when was the map published?


Thank her for the map contribution.

Hi Loren. I'm Jemmy. :)
I created the map after noticing I35 was a hotbed of energy.
Clearly, it needs updating now...and I failed to add another
event...2014 Ebola outbreak was also along I-35 (Parkland Hospital),
which was the same hospital that treated JFK's fatal wound.

One event missing from the map is the Smiley Face Balloon Crash which occurred near Lockhart about 30 miles South of Austin in July 2016.

PLaying the name game, I notice that Conditt’s initials are MAC. He meets his end on IH 35 in Round Rock, where Michael Dell lived and I link to this 2013 Forbes article about Dell only because of the word play in their headline

Michael Dell: Between A Round Rock (TX) And A Hard Place

His name Conditt immediately evoked for me the name of Gary Condit, the California congressman who was having an affair with the young Chandra Levy when she disappeared in 2001 in DC.
https://en.m.wikipedia.org/wiki/Gary_Condit#Levy_scandal

I can feel more Austin memories starting to bubble up. I’ll post them here as they do.

PS. One nice memory that did bubble up was meeting and getting to know SMiles Lewis in the early 90’s. Hi SMiles! Has it been a quarter of a century? Yes it has! Now that’s a Time Warp! Probably for both of us!

I've asked her to reply either here or on Merovee.

The one that we only thought about after she created the pic was Remember The Alamo which is linked to San Antonio.

It all goes on in Texas !

I appreciate all the followup comments.

However, I am still looking for the first actual location that Ms. Almond's map was published. And when?

But if it appeared before the Austin events, it certainly is amazing it had Round Rock on the map - that's where Conditt died by suicide.

Again, thanks for all the comments. More to come.

Loren, Apols. Jemmy was a typo.
The map was originally published on Frank's Merovee site.
If I'm not mistaken, this was the article wherein it was first published...
https://merovee.wordpress.com/2018/02/05/the-sound-of-philae/

Curious to note that Vega (Aramaic for "swooping/falling eagle") (part of the constellation, Lyra, which is visible in the sky as an inversion of the plotted map) is part of an asterism of three stars in the summer sky in the Northern hemisphere called the "Summer Triangle" (Vega, Altair, Deneb). Vega becomes the star at zenith during the summer months for the middle of the country.

Note the rise time in the calculation below of Vega over Austin on the day of the first bombing (00:33):

Name Game news story from this week: Marco Antonio Saavedra was pulled over in Pasadena Texas and shot by police. Another "Mark Anthony" fatality hot on the heels of the Conditt story.