The moniker "Bainbridge" is part of a historical Masonic name game that was elevated into the news in 2009. 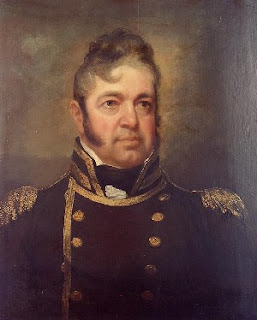 In 1800, Bainbridge was sent to carry the tribute which the United States still paid to the dey (local ruler) of Algiers to secure exemption from capture for its merchant ships in the Mediterranean. Upon arrival in the 24-gun USS George Washington, he made the tactical mistake of anchoring in the harbor of Algiers--directly under the guns of the fort. The dey demanded that he ferry the Algerian ambassador and retinue to Constantinople or be blown to bits on the spot. With great disgust, Bainbridge raised the Algerian flag on his masthead and submitted to the embarrassment of serving as the dey's messenger service.

In 1801, President Thomas Jefferson decided that having the United States continue to bribe the pirate Barbary states did not work, and authorized the use of force (just as President Obama did last week). Bainbridge then was called upon to serve against Algiers and Tunis. During this First Barbary War, Bainbridge successfully captured the Moorish warship Mesh-Boha and recaptured the US ship, the Celia.

In command of the USS Philadelphia, when she ran aground on the Tunisian coast on December 29, 1803, Bainbridge was imprisoned until June 3, 1806.

When the War of 1812 broke out between the United Kingdom and the United States, Bainbridge was appointed to command the 44-gun frigate USS Constitution, in succession to Captain Isaac Hull. The Constitution was a very fine ship of 1,533 tons, which had already captured the HMS Guerrière. Under Bainbridge she was sent to cruise in the South Atlantic.

Commodore Bainbridge's tombstone - the obelisk above - at the Christ Church Burial Ground in Philadelphia.

On December 29, 1812 he fell in with the 38-gun HMS Java, a vessel of 1,083 tons, formerly the French frigate Renommée. She was on her way to the East Indies, carrying the newly appointed lieutenant-governor of Bombay. She had a very inexperienced crew, including very few real seamen, and her men had only had one day’s gunnery drill. The United States Navy paid great attention to its gunnery, which the British Navy, misled by its easy victories over the French, had greatly neglected. In these conditions, the fate of the Java was soon sealed. She was cut to pieces and forced to surrender, after suffering heavy losses, and inflicting very little damage to the Constitution, other than removing Constitution's helm with a well-aimed shot.

During the action, Bainbridge was wounded twice, but maintained command throughout; even to replacing the missing helm on the Constitution with the one from the Java before she sank. To this day, the still-commissioned Constitution (anchored in Boston Harbor, near Bunker Hill) sports the helm that Bainbridge salvaged from the Java.

It was after the conclusion of the war with Britain that Bainbridge served against the Barbary pirates in the Second Barbary War.

During the American Revolution, Bainbridge's first command was the schooner USS Retaliation.

And it was US Navy SEALs snipers shooting from the USS Bainbridge - the ship - that brought an end to the hostage situation off the coast of Africa on Easter Sunday, April 12, 2009.

That sniper fire is the latest event in a long saga.

In one of the most famous cases, British Adm. Lord Nelson was killed in the Battle of Trafalgar by a French sniper firing from the rigging of a ship in 1805. [The publisher Lewis Masonic released an intriguing book in 1998, Horatio Admiral Lord Nelson: Was He a Freemason? by John Webb. It seems rather clear that Vice-Admiral Horatio Nelson, 1st Viscount Nelson, 1st Duke of Bronté, KB, was a Mason. Numerous monuments, including Nelson's Column (below) in Trafalgar Square, London, have been created in his memory and his legacy remains highly influential.] In the era of sailing warships, it was common practice to send marksmen into the rigging to shoot at enemy vessels.

This was one of the early duties of the U.S. Marines and the four-pointed quatrefoil design, on the top of Marine officers caps, reportedly originated as a way for Marine snipers in the rigging overhead to identify their own officers and avoid shooting them.

As another historical footnote, in 1820, Commodore Bainbridge served as second for Commodore Stephen Decatur (a Brother Mason) in the duel that cost Decatur his life. The Decatur name game is a book unto itself.

The Liberty Sun, a U.S.-flagged cargo ship bound for Mombasa, Kenya, was attacked Tuesday, April 14, 2009, by Somali pirates, according to a NATO source with direct knowledge of the matter. The USS Bainbridge, which was on its way to take the recently rescued merchant ship Captain Richard Phillips to safe harbor, has turned and is on their way to engage the pirates. This according to NBC News, as of April 15, 2009.

Thank You.
Posted by Loren Coleman at 5:17 AM

BainleannanDerived from the Irish word "Baine" meaning "pale or white" and leannan "lover" - a female or hermaphroditic celtic spririt that joined heroes on their quests. Related to Leannan Sidhe (lan-awn shee)