Update: The missing people were found in a park, praying.

Was this all merely media manipulation, a false alarm, or true law enforcement concern? 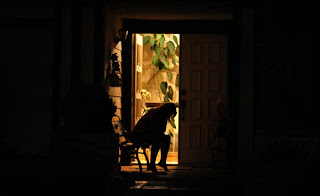 At her Palmdale home, Jisela Giron, a former neighbor of alleged cult leader Reyna Marisol Chicas, contemplates the religious group's fate and the well-being of the missing children. Giron attended church with Chicas and said she never noticed anything unusual about her behavior. (Allen J. Schaben, Los Angeles Times)

Law enforcement agencies on Saturday, September 18, 2010, launched a manhunt for members of a cult-like group after five adults and at least eight children were reported missing in Los Angeles. The 13 people, including one whom authorities described as a " cult-like leader," were reported missing Saturday afternoon after leaving a prayer meeting, the Los Angeles Sheriff Department said.

The group was believed to be traveling in three vehicles: a white 2004 Nissan Quest, a 1995 white Mercury Villager and a newer-model, silver Toyota Tundra, according to the California Highway Patrol, which issued an alert for them.

The missing persons also include three sisters, ages 30, 32 and 40, a 19-year-old son and eight children ages 3 to 17, according to Sheriff's Capt. Mike Parker.

Though there is no evidence they were planning to commit group suicide, an all-out search was in progress on Saturday night in the Antelope Valley area to check on their welfare, he said.

All of them were El Salvadoran immigrants, and left behind evidence they were waiting for the Rapture, or the end of the world, Parker said.

The incident began at 1:45 p.m. when two husbands went to the Lancaster sheriff's station to report that their wives were missing.

The husbands said they believed their wives had joined a cult-like group that broke off from an unidentified church in Palmdale, Los Angeles, Parker said.

One of them said he had been told by the leader, Reyna Marisol Chicas, 32, to pray over a purse that was in a Palmdale residence.

California's links to cults and mass suicides, especially regarding such events as Jonestown and Heaven's Gate, have made authorities in the past quite anxious to prevent repeats of those scenarios.

Jonestown.
Posted by Loren Coleman at 10:41 AM

At least one website I ran across was calling for the Rapture around "The Feast of Trumpets" this year.
http://www.2010rapture.org/
Any connection?