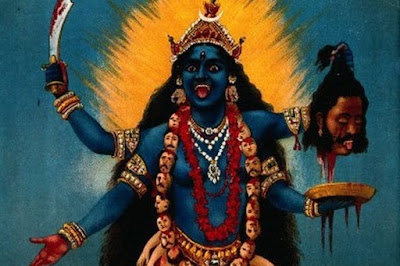 At least 17 have been killed when an overpass collapsed near Kolkata (which was formerly called Calcutta), India on March 31, 2016. Over 100 people are injured and over 100 are missing. 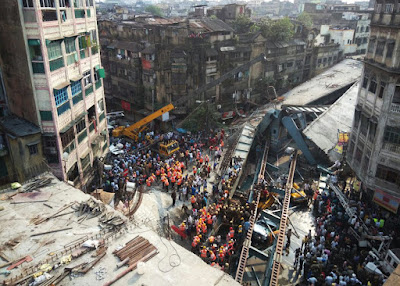 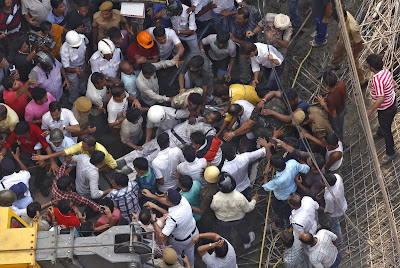 One of the meanings of Kolkata is "field of the goddess Kālī." 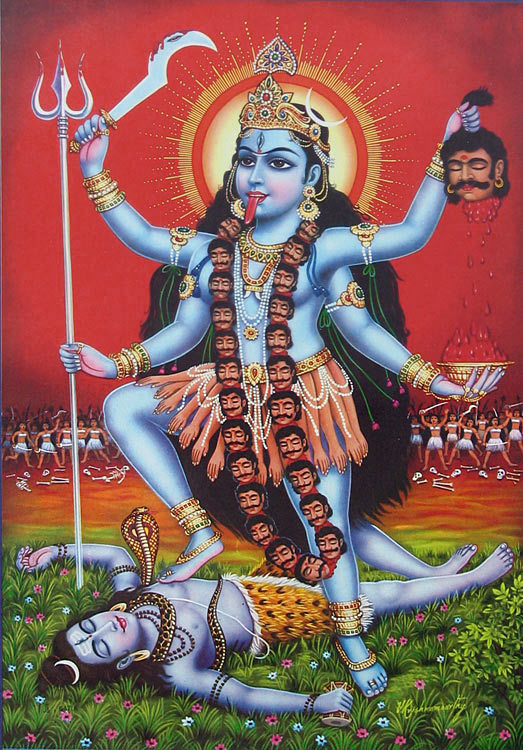 Kālī, is the Hindu goddess associated with empowerment, or shakti. She is the mighty aspect of the goddess Durga. The name of Kali means black one and force of time, she is therefore called the Goddess of Time, Change, Power, Creation, Preservation, and Destruction. Her earliest appearance is that of a destroyer principally of evil forces. Source.


Kali is associated with a tradition of carrying heads. Why?

There are several traditions of how Kali came into existence. One version relates when the warrior goddess Durga, who had ten arms each carrying a weapon and who rode a lion or tiger in battle, fought with Mahishasura (or Mahisa), the buffalo demon. Durga became so enraged that her anger burst from her forehead in the form of Kali. Once born, the black goddess went wild and ate all the demons she came across, stringing their heads on a chain which she wore around her neck. It seemed impossible to calm Kali’s bloody attacks, which now extended to any wrongdoers, and both people and gods were at a loss what to do. Fortunately, the mighty Shiva stopped Kali’s destructive rampage by lying down in her path, and when the goddess realised just who she was standing on, she finally calmed down. From this story is explained Kali’s association with battlegrounds and areas where cremation is carried out. Source. 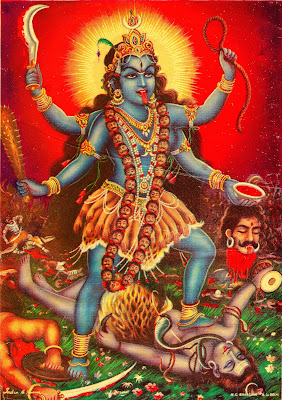 Tridents and heads. Kali's most common four armed iconographic image shows each hand carrying variously a sword, a trishul (trident), a severed head, and a bowl or skull-cup (kapala) catching the blood of the severed head.
Posted by Loren Coleman at 10:04 AM

10 April 2016;
“The Hindu temple in southern India was packed with thousands for a religious festival early Sunday when the fireworks began - an unauthorized pyrotechnic display that went horribly wrong.
Explosions and a massive fire swept rapidly through the Puttingal temple complex about 3 a.m. in the village of Paravoor, killing 102 people and injuring 380 others, officials said.
Scores of devotees ran in panic as the massive initial blast cut off power in the complex, while other explosions sent flames and debris raining down, a witness said. Many people were trapped inside.
"It was complete chaos," said Krishna Das of Paravoor. "People were screaming in the dark. Ambulance sirens went off, and in the darkness no one knew how to find their way out of the complex."
Das said the first deafening explosion occurred as the fireworks display was about to end and as he was walking away. It was followed by a series of blasts, he added.
The fire started when a spark from the fireworks show ignited a separate batch of fireworks that were being stored in the temple complex, said Chief Minister Oommen Chandy, the top elected official in Kerala state.
Most of the 102 deaths occurred when the building where the fireworks were stored collapsed, Chandy told reporters. About 60 bodies have been identified so far, he added.
Das said six ambulances had been parked outside the complex as a precaution. They carried the injured to hospitals in the state capital of Thiruvananthapuram, about 60 kilometers (37 miles) south of Paravoor, as well as the city of Kollam.
Villagers and police pulled many of the injured from under slabs of concrete.
TV channels showed video of huge clouds of white smoke billowing from the temple, as fireworks were still going off in the sky.
One of the explosions sent huge chunks of concrete flying as far as a kilometer (half a mile), said Jayashree Harikrishnan, another resident.


Firefighters brought the blaze under control by about 7 a.m., officials said. Rescuers searched the wreckage for survivors, while backhoes cleared debris and ambulances drove away the injured.
Thousands of worried relatives went to the temple to search for loved ones. Many wept and pressed police officials and rescue workers for information.
At one of the main hospitals in Thiruvananthapuram, Dr. Thomas Mathew said that judging from injuries, a stampede was also likely to have occurred.
The temple holds a competitive fireworks show every year, with different groups putting on displays for thousands gathered for the end of a seven-day festival honoring the goddess Bhadrakali, a southern Indian incarnation of the Hindu goddess Kali.
This year, however, authorities in Kollam district had denied temple officials permission to hold the fireworks display, said A. Shainamol, the district's top official.
"They were clearly told that no permission would be given for any kind of fireworks," Shainamol told reporters.
Permission was denied over fears the competing sides would try to outdo each other with more and more fireworks and because the temple gets overcrowded during the festival, she said.
Public displays of fireworks can be conducted only with permission from district officials, Shainamol said.
Chandy, the state's chief minister, said he had appointed a retired judge to investigate the events leading to the fire and that strict action would be taken against those who had ignored rules.
"We will be investigating how the orders were flouted and who was responsible for the decision to go ahead with the firework display," Chandy said.
Prime Minister Narendra Modi flew in from New Delhi to visit the site and met with Chandy and other Kerala leaders on measures to help the survivors.
Modi was accompanied by a team of doctors and burn specialists from New Delhi who will stay on to help treat the injured, officials said.” - CBS News