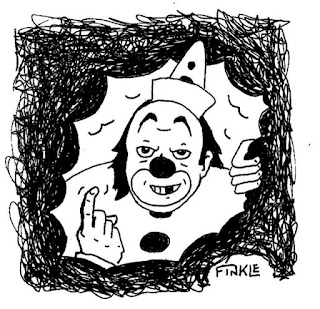 First there were a Stalking Clown seen in Green Bay, Wisconsin, at the beginning of August 2016.
Then late in August, into the first half of September 2016, Phantom Clowns made appearances in Greenville, South Carolina; Green Havel, Alamance County, North Carolina; Greensboro, North Carolina; and now Greensboro, Alabama.
"Green" is, in addition to a Masonic one (Macon, Fayettevile, LaGrange), certainly a Name Game thread throughout. As seen below, the mapping as been incomplete and inconsistent.
From Travis Vaughn, Editor:
Amid social media rumors of “creepy clowns” lurking around Tuscaloosa and Hale counties (Alabama), Greensboro Police Chief Mike Hamilton said Thursday morning, Sept. 15, that a woman called that morning to report “someone dressed in a clown suit” in a mobile home park on North Street in Greensboro. The woman told police she was walking with her children before school when she saw the person. No threatening behavior was reported, according to Hamilton.So far, no reports have been made with Moundville Police, and we are awaiting responses from both the City of Tuscaloosa Police Department and the Tuscaloosa County Sheriff's Office.
Clown sightings have been reported throughout the Southeast over the last few weeks, with the initial reports coming from the Carolinas. Facebook posts about the sightings in west Alabama increased Wednesday, Sept. 14. Some reported clowns simply making appearances in public, but others claimed clowns were trying to lure kids into vans.
Acting Chief Keith Burch with the Moundville Police Department said citizens should, as always, take responsibility for the safety of themselves and their families and report any suspicious activity to the police. He also urged citizens to use common sense and consider that some of the sightings may simply be harmless pranksters.
We will follow this story and will update as circumstances warrant. We will have a full update in the Sept. 21 edition of the Moundville Times.

Flomaton schools were put on lockdown for more than an hour Thursday morning, September 15, 2016 after school officials said a threat was made against a student on social media.  The source of the threat came from a Facebook page featuring clowns.   That had the whole community talking and the FBI involved.

“You don’t take it lightly.  That’s my gut feeling.  You know, you just have to be cautious these days,” said the grandmother of one student.

“Yeah, I’m worried.  I’ve never heard of such a thing as that,” said another.

That summed up how parents and grandparents were reacting Thursday morning after the two schools in Escambia County went on lockdown and others had stepped up police patrols.

School officials said a student received a serious threat through the Facebook page, Flomo Klown.  That, coupled with supposed clown sightings and pictures circulating in the county over the last couple of days heightened those concerns.

Some of the early mapping: 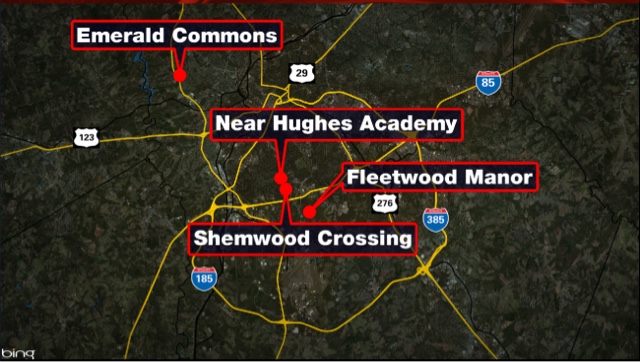 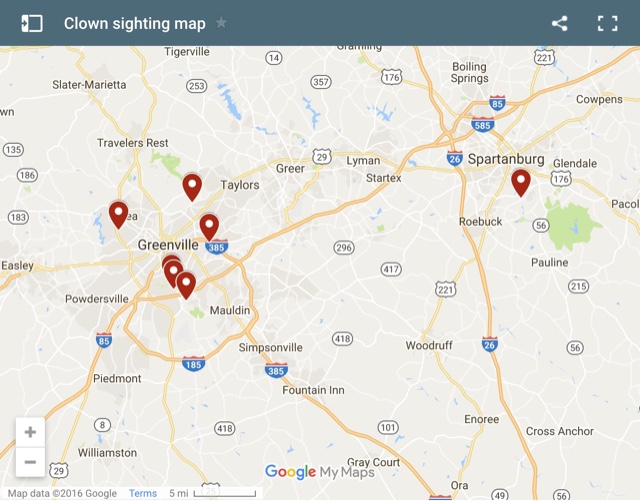 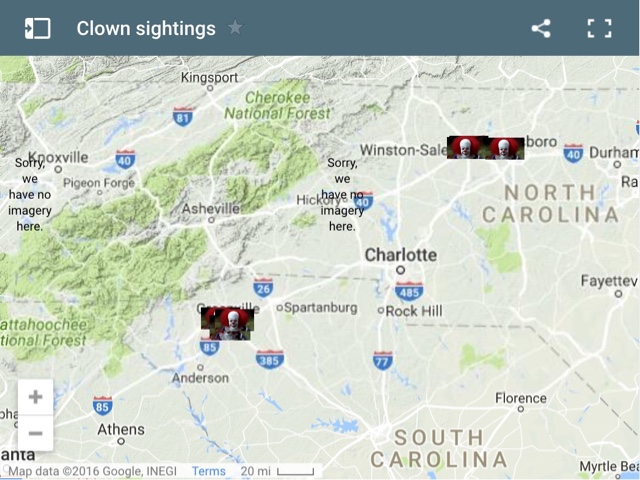 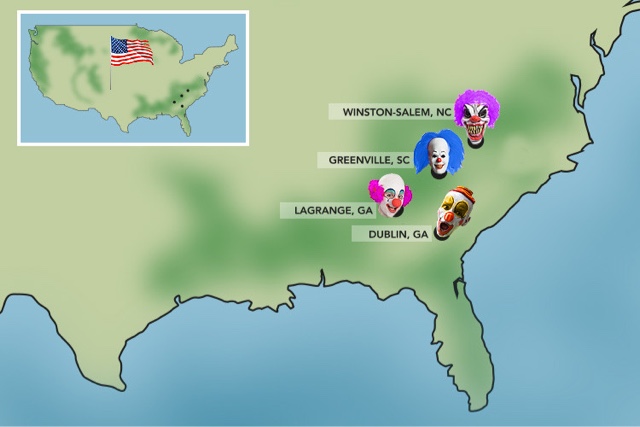 UK's The Sun published a map showing other sites for clown sightings. 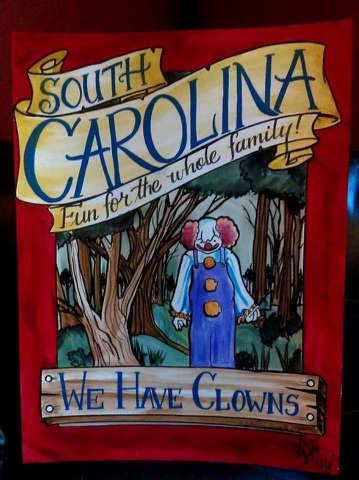 Some of the humor is certainly less than funny to those reporting the clowns.
Posted by Loren Coleman at 6:27 AM

The latest summary of the Creepy Clown Epidemic, this time from the UK Telegraph paper, as of September 20

'Creepy' clown sightings are spreading across the United States

From the 9/16 Ledger-Enquirer article: "The teens are accused of making threats Monday at LaGrange High School on GREENWOOD Street." (caps mine)

Funny I decided to read "Mysterious America" for the first time the other day because of this clown thing, and that book was the first time I'd heard about this "name game". Next day I noticed GREENsboro and GREENville. I notice a lot of red/blue duality symbolism in the media, but what does green mean? All I could think of was a "greenhorn" or a person who is "green" meaning naive, newbie, "wet behind the ears" etc. The Green Man? Little green men? I dunno.
From etymology online: "unripe, immature;" and of persons, "of tender age, youthful, immature, inexperienced;" hence "gullible, immature with regard to judgment" (c. 1600)
Like maybe kids who are inexperienced and will follow a clown for candy?

Have you caught up with this one yet?

An 11-year-old Athens girl was arrested for bringing to school a knife she said was needed to fend off clowns.

The arrest occurred Friday at Burney-Harris-Lyons Middle School, amid recent news reports about unsubstantiated claims that clowns have been terrorizing children in Georgia and other states.

The girl was taken by the principal to the front office where she was questioned by a police officer.

“She said that the reason she had the knife was for protection for her and her family because she had heard the stories about clowns jumping out of the woods and attacking children,” the officer wrote in an Athens-Clarke County police report. . . .

The knife incident at the middle school in Athens occurred the same day Athens Banner-Herald reported local police were investigating a report that some children were chased by a group of clowns as they were leaving the East Athens Community Center. The incident was first reported the previous day by OnlineAthens.

Well, the police finally caught one! In Kentucky!

Kentucky police have arrested a man dressed as a clown lurking in a wooded area amid a wave of clown reports in at least six US states.

The clowns have reached Oregon.