On Sunday night, July 22, 2018, a 10-year-old girl and an 18-year-old woman were killed and 13 others were injured when a man armed with a handgun fired into restaurants and at patios in the Toronto’s popular Greektown neighborhood, authorities said.

Toronto Police Chief Mark Saunders would not release the name of the two people killed, but said the girl is from the Greater Toronto Area, and the woman is from Toronto. An additional 13 men and women were injured.

The suspect, a 29-year-old man from Toronto, is also dead and the Special Investigations Unit is investigating an exchange of gunfire between police and the shooter. Monica Hudon, a spokesperson for the police watchdog, said Monday that the SIU will not release the suspected gunman’s name until they confirm his identity.

Police said the gunman moved down Danforth Avenue, starting near Logan Avenue, spraying bullets along the way. Danforth Avenue will be closed between Pape and Broadview Avenues until further notice.

The shooter, dressed in black, can be seen in these screen captures from CTV footage. 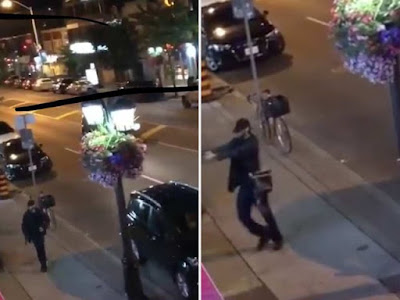 Greektown is a popular area for weekend activities.

Greektown – also known as Greektown on the Danforth, or more simply, The Danforth is within the city of Toronto. Named after Asa Danforth, an American contractor who designed Queen Street and Kingston Road — other streets in the city — the area is known for its architecture dating back to as early as 1910, and for its number of Greek restaurants and stores.

Prior to World War II, Toronto's nascent Greek population of approximately 3,000 was concentrated in the area bounded by Yonge Street, Carlton Street, Church Street and what is now Dundas Street East. It was this area that was the focus of the 1918 Toronto anti-Greek riot.

In the 1950s, the Danforth saw an influx of Italian immigrants followed by Greek immigrants in the 1960s - many of whom were fleeing political and economic unrest which culminated in the seizure of power by the Greek military junta of 1967–74. In the 1970s and 1980s the Danforth was regarded as the largest Greektown in North America.

Some parts of Greektown are still dominated by Canadians of Greek descent (Greek-Canadians). Most immigrated from Greece to Canada. According to the 2006 Census, Greeks constitute the most populous ethnic group in Ward 29 ("Toronto-Danforth"), where the Greektown is located, at 13% of the total population (5,755 of 27,415 inhabitants). 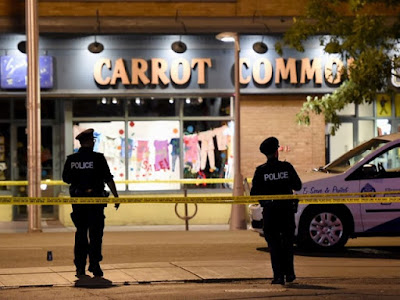 Also in Toronto on the same day... 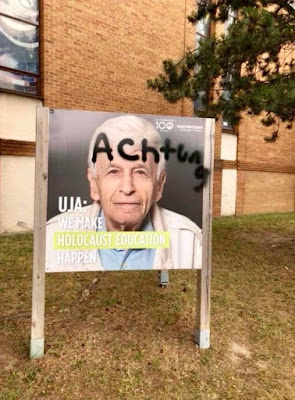 A sign advertising holocaust education was spray painted with the word ACHTUNG outside the Sarah and Chaim Neuberger Holocaust Education Center in North York (Toronto, Canada) on Sunday, July 22, 2018, before the Greektown attack.

The Jewish community is expressing outrage after a sign featuring a Holocaust survivor was vandalized over the weekend.

The United Jewish Appeal Federation of Toronto (UJA) said in a tweet Sunday that a sign advertising holocaust education was spray painted with the word “Achtung” outside of the Sarah and Chaim Neuberger Holocaust Education Center in North York.

“Achtung,” a German word, translates to “attention,” and was often used in Jewish concentration camps — sometimes as a wake-up call — during the Nazi era.

The Toronto van attack was a vehicle-ramming attack that occurred on April 23, 2018, in Toronto, Ontario, Canada. A man, alleged to be Alek Minassian, drove a rented van and sped through the North York City Center business district, deliberately targeting pedestrians, killing 10 and injuring 16, some critically. The attack started at the intersection of Yonge Street and Finch Avenue, and proceeded south along the sidewalks of Yonge Street to near Sheppard Avenue. The 25-year-old Minassian was arrested uninjured just south of the crime scene, after attempting to provoke a police officer to kill him. The arrest was made at 1:32 p.m., seven minutes after the first 9-1-1 call reporting the incident was made. The incident is the deadliest vehicle-ramming attack in Canadian history.

In 2017, a ramming incident happened in Alberta. The Edmonton attack was a stabbing and vehicle-ramming attack that occurred in Edmonton, Alberta, Canada, on September 30, 2017. Edmonton police constable Mike Chernyk was allegedly hit and stabbed by 30-year-old Abdulahi Sharif, who then struck four pedestrians with a rental truck during a police chase. All four injured survived and were hospitalized. The incident is currently being investigated as a terrorist attack, with police confirming the presence of an Islamic State of Iraq and the Levant flag in the van that rammed the police officer. The main suspect, 30-year-old Abdulahi Hasan Sharif, is a Somali national and refugee.

In the 1970s, there appeared to be a serial killer who haunted the gay bars on Yonge Street. See here. 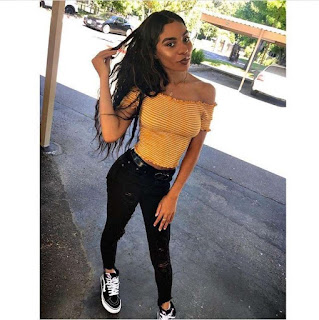 Photo of Nia Wilson published by the media.

In San Francisco, the hunt for a man suspected of fatally stabbing Nia Wilson an 18-year-old woman throat and injuring her sister July 22, 2018, Sunday evening stretched into Monday afternoon, with police scouring the area near Oakland’s MacArthur BART station and reviewing surveillance videos of the station and train car.

BART officials on Monday confirmed a “be on the lookout” alert for 27-year-old John Cowell. The suspect in the fatal stabbing is 5-foot-8 and weighs 190 pounds, and he has short, dark hair as well as a closely cropped beard and mustache, officials said. He is considered dangerous and BART has asked anyone who comes into contact with him to call 911.

Nicole Mikels’ train had just rolled into the MacArthur station Sunday evening when the quiet commute was interrupted by what she called “horrifying screams.” The sounds came from the direction of two young women Mikels had noticed when she boarded the train a few minutes earlier at the Rockridge station. One sister was “screaming for help,” Mikels said. “Her sister was bleeding profusely by the neck — her entire torso was covered in blood.”


“She said everything happened so fast,” Mikels said. “[That] it was a white male that had slit her sister’s throat.”

The seemingly random attack launched an overnight manhunt that continued early Monday morning, as police searched for a 5-foot-9 heavyset male in his 20s or 30s with short spiky hair.

Authorities on Sunday evening described the event as a double stabbing. Officials had no immediate update on the condition of Wilson’s sister Monday morning.