The cause was declared (by the family) to be a "cerebrovascular accident." Some reports say that Annabelle Neilson, nicknamed Tinklebelle by Alexander McQueen, had hung herself by a scarf from a doorknob. She was said to be the Muse of McQueen, who died by suicide in 2010. McQueen was born on March 17, 1969, and died on February 11, 2010.

Nielson had divorced Nathan Philip Rothschild, who is the sole heir of Jacob the 4th Baron Rothschild. They were married from 1994 to 1997. She was given a large fiscal settlement to not use the Rothschild name. 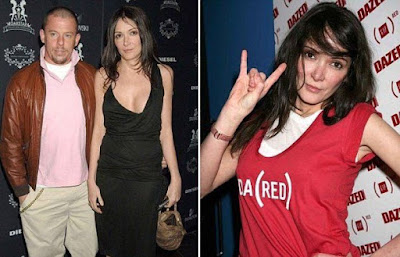 Rothschild had also dated L'Wren Scott, who died by suicide.

Kate Spade used the same method to kill herself - from a scarf from a door knob - as had been used by L'Wren Scott, 49, on St. Patrick's Day in 2014. The date, March 17th, was McQueen's birthday.

Chester Bennington of Linkin Park, died by hanging from a doorknob, on July 20, 2017, on the birthday of Chris Cornell.

Chris Cornell recalled in 2008 that he was sitting in the living room of Kelly Curtis (Pearl Jam's manager) following the death of Mother Love Bone singer Andy Wood in 1990. Cornell was a roommate of Wood's. Temple of the Dog was Cornell's tribute band dedicated to Wood.

At Wood's funeral reception, about 30 people were sitting around crying when Staley came in crying "so deeply that he looked truly frightened and lost."
One death, one suicide appears linked to the next. It is an ongoing cycle.
Posted by Loren Coleman at 9:19 AM

All these people who died by hanging apparently had a second thing in common, narcissism. Auto-erotic asphyxiation, anyone?