Ford's Theatre: An Amazing Replica for 2019 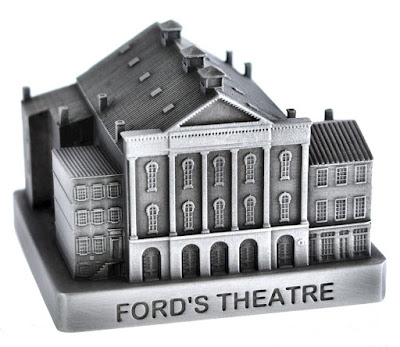 On April 14, 1865, U.S. President Abraham Lincoln, 56, was shot in Ford's Theatre, Washington, D.C., by the actor John Wilkes Booth. The same evening, U.S. Secretary of State William H. Seward and his family were attacked at home by Lewis Powell.

Lincoln died the next day at 7:22 a.m. in the Petersen House (10th Street, NW), across the street. The Petersen House was purchased by the U.S. government in 1896 as the "House Where Lincoln Died," being the federal government's first purchase of a historic home. The rooms of this house are furnished as they were on the day Lincoln passed away.

Ford's Theatre is a natural location to have memorialized as a replica building. The site was originally a house of worship, constructed in 1833 as the second meeting house of the First Baptist Church of Washington, with Obadiah Bruen Brown as the pastor. In 1861, after the congregation moved to a newly built structure, John T. Ford bought the former church and renovated it into a theater. He first called it Ford's Athenaeum. It was destroyed by fire in 1862, and was rebuilt.

On June 9, 1893, the front part of the building collapsed, killing 22 clerks and injuring another 68. This led some people to believe that the former church turned theater and storeroom was cursed. The building was repaired and used as a government warehouse until 1911.

It languished unused until 1918. In 1928, the building was turned over from the War Department Office to the Office of Public Buildings and Parks of the National Capital. A Lincoln museum opened on the first floor of the theater building on February 12, 1932—Lincoln's 123rd birthday. In 1933, the building was transferred to the National Park Service.

On January 21, 1968, Vice President Hubert Humphrey and 500 others dedicated the restored theater. The theater reopened on January 30, 1968, with a gala performance. The presidential box is never occupied.

The theater was again renovated during the 2000s. It has a current seating capacity of 665. The re-opening ceremony was on February 11, 2009, which commemorated Lincoln's 200th birthday.

It is intriguing to observe that with the seating at 665, with the addition of John Wilkes Booth to the picture (not seated), the capacity is at 666.

On the occasion of the 154th anniversary of the assassination, Mike Merwine of InFocusTech (replicabuildings) has finally replicated in metal the site of Lincoln's political murder. As Merwine noted, "Events and places sometimes create legends that span centuries." 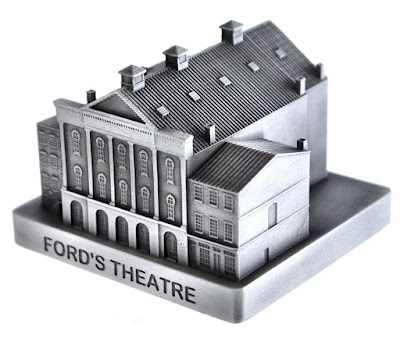 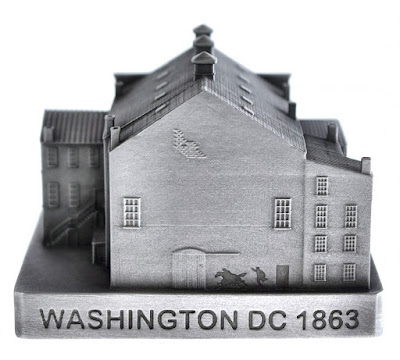 Replicas of these events are an important way to recall this incident and the links to it. For readers of this blog, you are well-aware of the special relationship that special names and incidents have in the past, present, and future with specific locations. Those linked to "Lincoln" certainly fall into this category.

Ford's Theatre As A Replica

Copies of Ford's Theatre come in a few rare selections, but the Merwine model is unique, for being detailed and solid metal. Order here by clicking on Ford's Theatre. 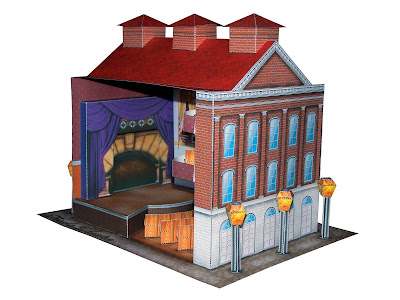 Paper Models, Inc. has a model kit, oriented to schools, of Ford's Theatre. It is made from paper. 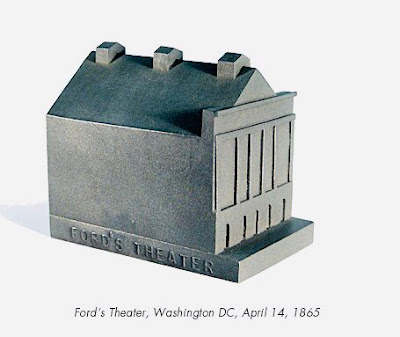 In terms of high-end design replicas, several people know about and collect Constantin Boym's and Laurene Leon Boym's Ford's Theater (sic, the actual spelling is "Ford's Theatre"), from the series Buildings of Disaster, 1998-2008.

Buildings from the series, originally priced as low as $110, today are valued from $200-$600. The stylized artifacts are a "design object" made from a cast resin-type material with bonded nickel in the mixture. 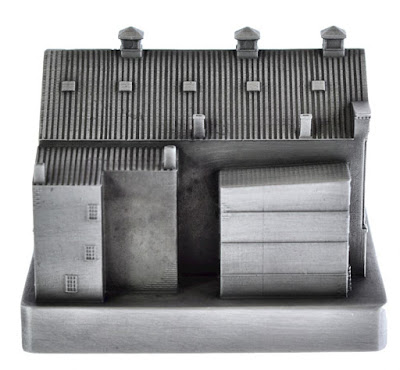 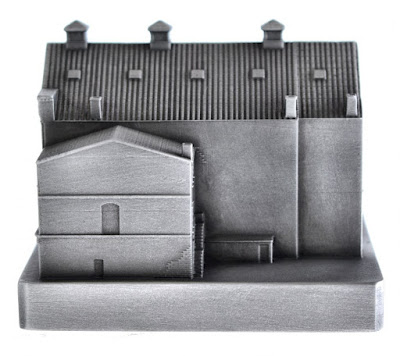 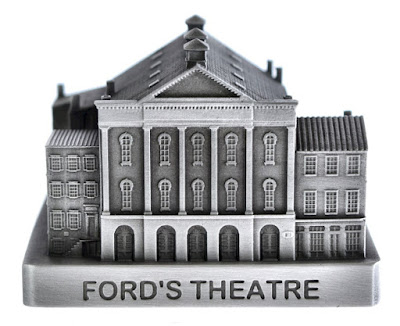 InFocusTech's 2019 example is detailed to reflect an authentic study of Ford's Theatre, from all sides. For a reasonable price: $85. (I would predict this piece will leap in value within a year or two. In 2065, this will be a rare collectible on the 200th anniversary of the assassination.)

It may be ordered directly from here.

++++
This critique of the replica of Ford's Theatre is done without any fiscal remuneration to the reviewer. I am a member of the Souvenir Building Collectors Society, and encourage interested parties to join the SBCS organization. ~ Loren
Posted by Loren Coleman at 12:42 PM