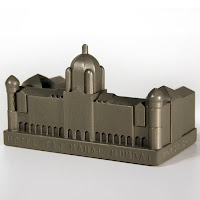 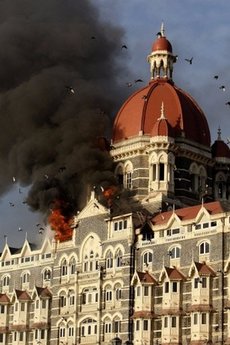 At the time, in 2008, I wrote extensively on Twilight Language of this incident here.

It is a film I wanted to see. I saw Hotel Mumbai this weekend, and was surprised the theater was almost full for an afternoon screening. 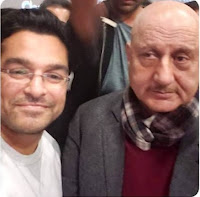 I wondered aloud to Verma whether there was a replica of the Taj Matah Palace Hotel of Mumbai. I wanted to add such a souvenir building to my informal buildings of disaster collection. He quickly answered that the Boyms themselves had created a new edition to their landmark Buildings of Disaster series in 2009. (I had placed this on the list I had compiled in 2018, but had forgotten.)

Verma had attempted to obtain a copy but they were all sold out, a few years ago.

A quick internet search revealed the image of this replica when it was first on sale, and the background story. 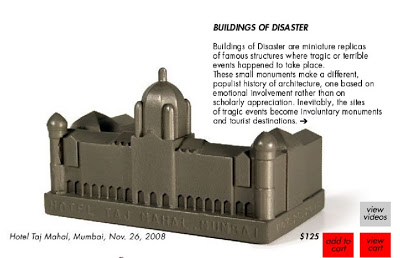 I recently came across this replica of the Taj Mahal Hotel in Mumbai (aka Bombay). It is designed and manufactured by a company called Boym Partners Inc. They have a series of what they call the "Buildings of Disaster".

This one in particular is called, "Hotel Taj Mahal, Mumbai, November 26, 2008. The date might sound familiar to you as it commemorates the recent Mumbai attacks. Source.

An old posting by Boym gives these details:


Our collection of Buildings of Disaster continues with a new edition, Hotel Taj Mahal, to commemorate the first anniversary of the terrorist attack in Mumbai on November 26, 2008.

Over ten years ago, we made our first buildings for the catalogue Souvenirs for the End of the Century. Produced in a limited edition of 500, many monuments are no longer available. Every piece is individually cast of specially formulated bonded metal, hand-finished, and consecutively numbered. The new building is 4.5” long. Source. 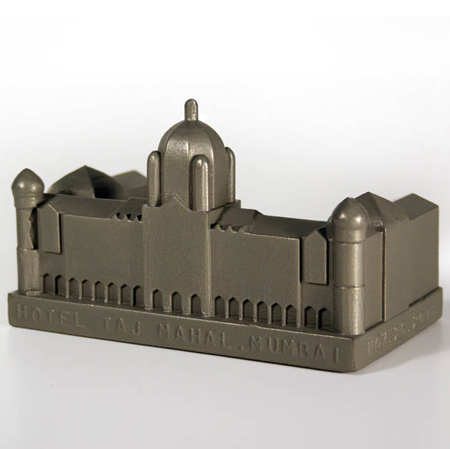 I have been unable to find one of these replicas for sale, so if you find or have any you wish to sell, please let me know. Contact Loren Coleman.

Buildings of Disaster is a project begun by Boym Design Studio in 1998. This thoughtful project is described by the creative director, Constantin Boym:

The end of a century has always been a special moment in human history. While we no longer expect the world to come to an end, we all still share a particular mood of introspection, a desire to look back and to draw comparisons, and a sense of closure and faint hope. Above all, the end of the century is about memory. We think that souvenirs are important cultural objects which can store and communicate memories, emotions and desires. Buildings of Disaster are miniature replicas of famous structures where some tragic or terrible events happened to take place. Some of these buildings may have been prized architectural landmarks, others, non-descript, anonymous structures. But disaster changes everything. The images of burning or exploded buildings make a different, populist history of architecture, one based on emotional involvement rather than on scholarly appreciation. In our media-saturated time, the world disasters stand as people's measure of history, and the sites of tragic events often become involuntary tourist destinations.

Posted by Loren Coleman at 5:48 PM