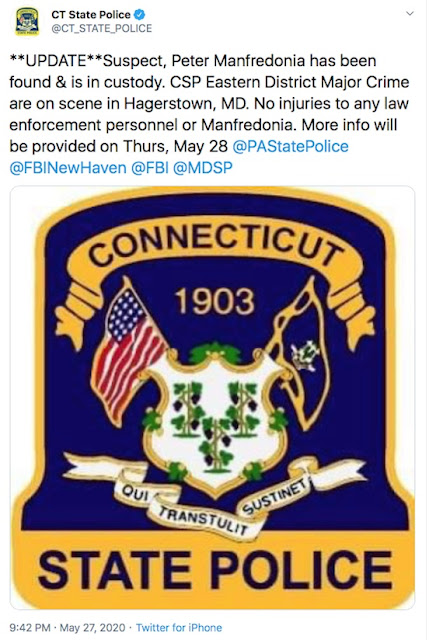 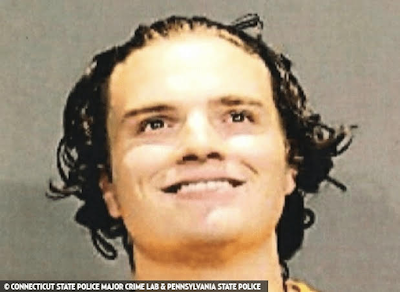 Peter Manfredonia, a Newtown native and University of Connecticut student has been accused of killing two men and injuring another. He was looking for a young woman he knew as he carried out his murderous spree, according to the wife of one of his victims. Peter Manfredonia, 23, a senior at the university who is still at large, was looking for the woman before he crossed paths with her neighbor, 62-year-old Ted DeMers, the man’s wife said.

“He was clearly walking to her home with a mission, with a machete in his backpack,” Cyndi DeMers told the Associated Press.

DeMers also said she talked with the woman’s father over the weekend and was told the family had been considering filing for a restraining order against Manfredonia, who had visited the home in the past.

Police believe Manfredonia, whose family they said has a history of mental illness, killed DeMers and another man in separate attacks before fleeing the state with stolen firearms in a stolen car.

After killing DeMers, Manfredonia was then headed to a friend’s house, who also lived in Derby, and allegedly killed the man, identified by cops as 23-year-old Nicholas Eisele. The suspect left that murder scene and allegedly abducted Eisele’s girlfriend and stole a 2016 black Volkswagen Jetta from her home. Authorities later Sunday found the car in New Jersey at the Pennsylvania border. Eisele’s girlfriend was also found unharmed. Manfredonia then crossed the border into Pennsylvanian, where he remained at large on Sunday night.


Manfredonia Meaning. Italian: habitational name from the region of Manfredonia in Apulia, named for Manfredo, king of Sicily.
Manfredo Meaning (Italian), from the Germanic personal name Mag(in)frid, composed of the elements mag(in) 'strength', 'might' + frid 'peace' (common in Lombardic records in the mid- and late 8th century). Manfred is derived from the Germanic elements magan "strength" and frid "peace". This is the name of the main character in Lord Byron's drama Manfred (1817). 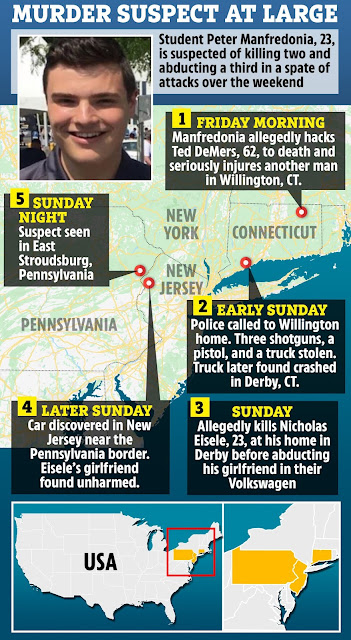 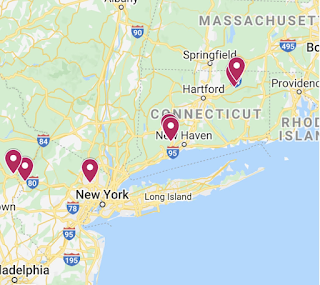 Alleged sighting and the killing locations for Peter Manfredonia. Manfredonia was last seen Sunday, May 24, 2020, in East Stroudsburg, Pennsylvania, after he allegedly killed two men and seriously injured another in two separate attacks in Connecticut. 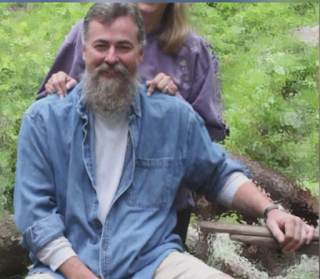 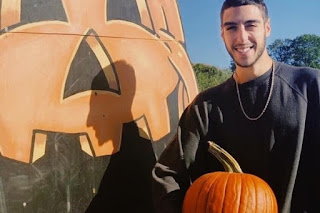 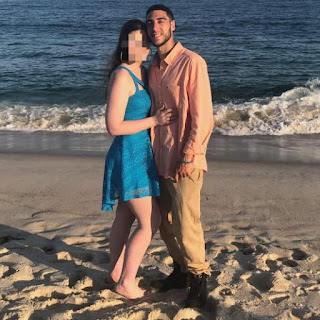 Victims Nicholas Eisele and his girlfriend.

The stolen black 2016 Volkswagen Jetta was recovered at the Travel America truck stop in Knowlton Township, New Jersey, on Sunday, May 24, 2020. Eisele's girlfriend was found in the car, alive. The truck stop photograph is an updated file copy. 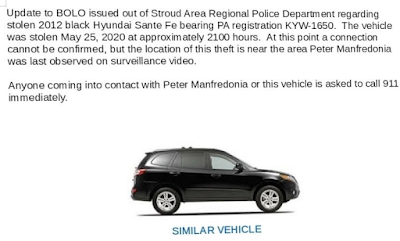 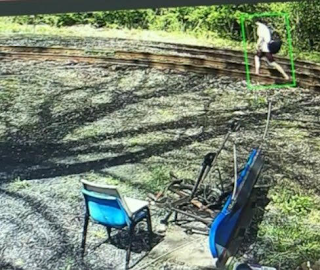 The last sighting of Manfredonia was in Pennsylvania. He is shown in the green rectangle. 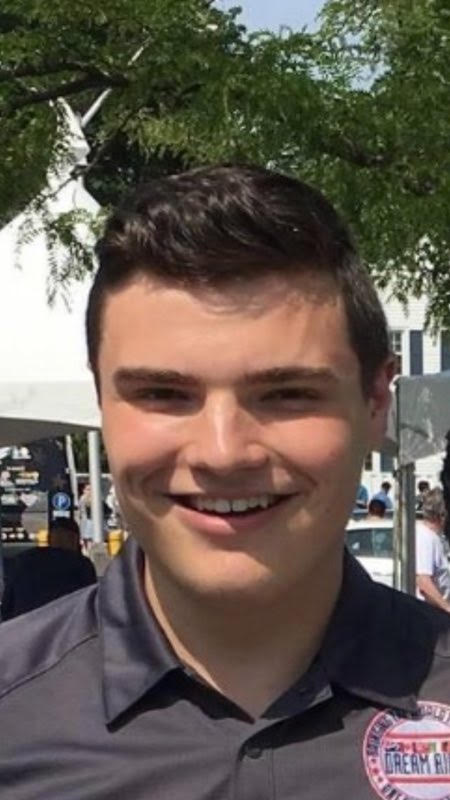 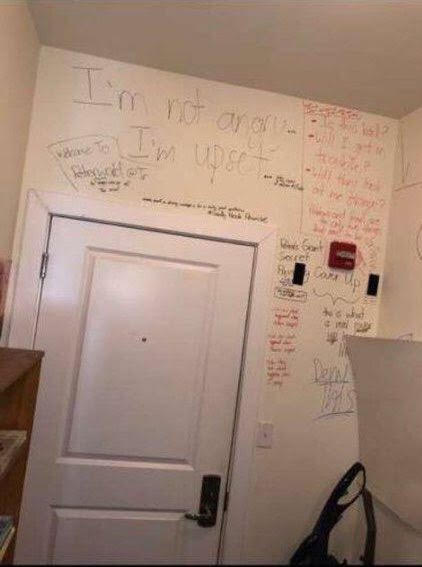 The walls of Manfredonia's room was a treasure trove of warning signs. No one paid attention. 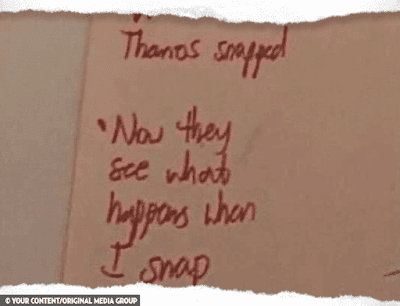 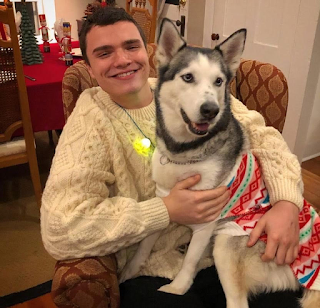 The father of Peter Manfredonia, the University of Connecticut student wanted in two murders was arrested last month for allegedly groping an underage teen girl he supplied booze to, a police report said. The alleged incident involving Robert Manfredonia, whose son Peter Manfredonia is still at large, occurred on April 10, 2020, the Connecticut Post reported, citing police. The elder Manfredonia is accused of giving alcohol to two teen girls and, after one of the girls left, allegedly touching the other, according to an arrest warrant obtained by the paper. One of the girls told authorities they also smoked weed. Police charged the father, who’s free on $50,000 bond, with sexual assault, risk of injury to a minor and providing alcohol to a minor.

Still at large, police describe Peter Manfredonia as a 6-foot-3 white man who should be considered armed and dangerous.

Manfredonia is a 2015 graduate of Newtown High School and a senior at the University of Connecticut majoring in finance and mechanical engineering, the Connecticut Post reported. Police said that the driver's side of the stolen Jetta car had a bumper sticker on it paying tribute to the 26 victims of the 2012 Sandy Hook massacre, which took place in Newtown. Manfredonia once fundraised against gun violence due to his personal involvement in the Sandy Hook massacre.

On December 14, 2012, Adam Lanza, 20, came to the Sandy Hook Elementary School and undertook a mass shooting. This event resulted in 27 people (20 children and 6 adults plus the gunman by suicide), to die at the school in Newtown, Connecticut. The gunman had killed his mother before coming to the school.

Although not labeled as such at the time, Adam Lanza appears to have been an "incel." 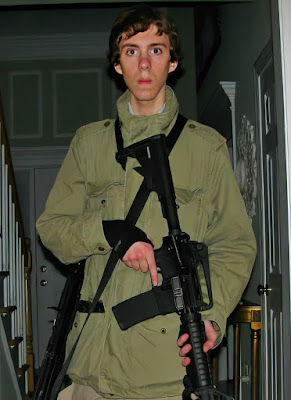 The Los Angeles Times observed that boys without fathers "are the ones that we need to watch out about. Those account for 26 out of the 27 mass shooters that have killed eight or more since 1949. Those account for almost all your school shooters and almost all your mass shooters. Dylann Roof, Elliot Rodger, Adam Lanza — even the 6-year-old [school shooter] Dedrick Owens had a background of fatherlessness."

According to the special report conducted by the Newtown Police, a search of the Lanza house produced several examples of material that showed Adam Lanza read extensively about school and mass shooters, and on suicides.

The documents listed in that report included:

The Sandy Hook school shooting ended with Adam Lanza's self-inflicted death. The police heard the final shot at 9:40:03 a.m.; they believe that it was Lanza shooting himself in the lower rear portion of his head with the Glock 20SF in classroom 10. Lanza's body was found wearing a pale green pocket vest over a black polo shirt, over a black T-shirt, black sneakers, black fingerless gloves, black socks, and a black canvas belt. Other objects found in the vicinity of Lanza include a black boonie hat (a bucket hat with a stiff brim and usually having a camouflage pattern] and thin frame glasses. The Glock was found, apparently jammed, near Lanza, and the rifle was found several feet away from him. A 9 mm SIG Sauer P226, which was not fired during the incident, was found on Lanza's person.

Other shooters have copycatted Adam Lanza.

A school shooting occurred at Santa Fe High School in Santa Fe, Texas, United States, in the Houston metropolitan area, on May 18, 2018. Ten people – eight students and two teachers – were fatally shot and thirteen others were wounded. The suspected shooter was taken into custody and later identified by police as Dimitrios Pagourtzis, a 17-year-old student at the school.

Dimitrios Pagourtzis reportedly studied mass shootings of the past before killing 10 students and teachers and wounding 13 others. A source told ABC News he “used aspects of those (attacks) in his own shooting.”

Mirroring the attacks in Parkland, Florida, the Sandy Hook shooting in 2012, and Columbine High school in 1999, Pagourtzis snuck a .38 caliber pistol and Remington shotgun in his black coat and brought it to school Friday morning (May 18) and opened fire before the first bell rang.

William Atchison killed two people on Pearl Harbor Day, December 7, 2017, before killing himself in Aztec, New Mexico, in a shooting at Aztec High School, where he had previously been a student. He had used the pseudonym "Elliot Rodger" on several online forums, and praised "the supreme gentleman" (a term Rodger had used to describe himself, which has since been adopted as a moniker by incel communities).

Atchison's online activity included posting pro-Hitler and pro-Trump thoughts on alt-right forums and white nationalist websites like The Daily Stormer under such usernames as "Future Mass Shooter" and "Adam Lanza," and joking about school shootings, in particular the Columbine High School massacre. Via a Steam chat group he was in contact with the perpetrator of the 2016 Munich shooting. He also posted about his frustration with life in rural New Mexico and bleak career prospects. Atchison was also a sysop in Encyclopedia Dramatica, a website he joined when he was 11.

The journey for Peter Manfredonia continues. 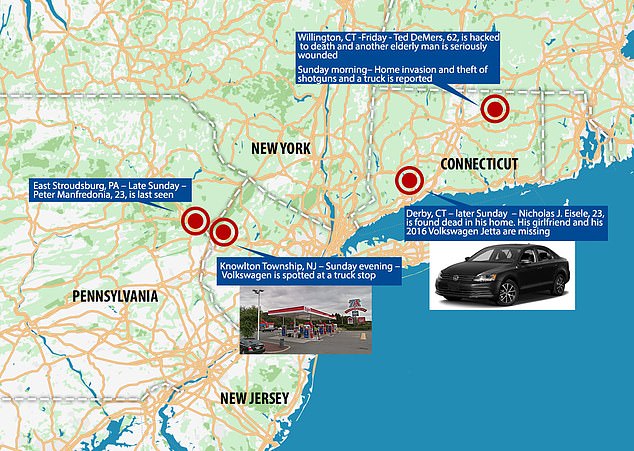 Thanks for Johanna Lenski for pointing out an initial link.
Posted by Loren Coleman at 2:34 PM

so Adam Lanza killed himself by shooting himself in the back of the head with a jammed Glock? how does that work? never read that info before.