In my second book, published in 1978, Jerome Clark and I picked this quote for the dedication page:


There is not wanting a feast of broad joyous humor in this strange phantasmagoria, where pit and stage, and man and animal, and earth and air, are jumbled in confusion worse confounded. ~ Thomas Carlyle, 1795-1881. 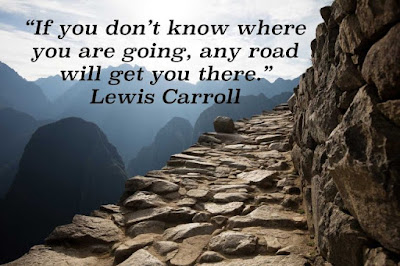 We tell ourselves stories in order to live...We look for the sermon in the suicide, for the social or moral lesson in the murder of five. We interpret what we see, select the most workable of the multiple choices. We live entirely, especially if we are writers, by the imposition of a narrative line upon disparate images, by the "ideas" with which we have learned to freeze the shifting phantasmagoria which is our actual experience.― Joan Didion, The White Album (1979)

A phantasmagoria indicates changing successions, combinations, or sequence of real, fantastic, bizarre, or imagined imagery like those seen in a dream or nightmare.

Phantasmagoria (also fantasmagorie, fantasmagoria) was a form of horror theatre that (among other techniques) used one or more magic lanterns to project frightening images such as skeletons, demons, and ghosts onto walls, smoke, or semi-transparent screens, typically using rear projection to keep the lantern out of sight.

We interpret what we see, select the most workable of the multiple choices. We live entirely, especially if we are writers, by the imposition of a narrative line upon disparate images, by the “ideas” with which we have learned to freeze the shifting phantasmagoria which is our actual experience. ― Kelleigh Greenberg-Jephcott, Swan Song (2018)

The etymology of the term gives a virtual early history of its appearance.

From French phantasmagorie, from Ancient Greek φάντασμα (phántasma, “ghost”) + possibly either αγορά (agorá, “assembly, gathering”) + the suffix -ia, or ἀγορεύω (agoreúō, “to speak publicly”).
Paul Philidor announced his show of ghost apparitions and evocation of the shadows of famous people as Phantasmagorie in the Parisian periodical Affiches, annonces et avis divers of December 16, 1792. About two weeks earlier the term had been the title of a letter by a certain "A.L.M.", published in Magazin Encyclopédique. The letter also promoted Phylidor's show. Phylidor had previously advertised his show as Phantasmorasiin Vienna in March 1790.
The English variation Phantasmagoria was introduced as the title of M. De Philipsthal's show of optical illusions and mechanical pieces of art in London in 1801. De Philipsthal and Philidor are believed to have been the same person. Source.

Early stop trick films developed by Georges Méliès most clearly parallel the early forms of phantasmagoria. Trick films include transformations, superimpositions, disappearances, rear projections, and the frequent appearance of ghosts and apparent decapitations. Modern-day horror films often take up many of the techniques and motifs of stop trick films, and phantasmagoria is said to have survived in this new form.

Once could say that what is occurring all around us today, inside the theater and outside, is phantasmagoria.

Should we be surprised to find ourselves revisiting, Colorado, indeed Aurora, literally "Red Dawn"? This was the "red dawn" location of the theater mass shooting of July 20, 2012, at the opening of The Dark Knight Rises.

Following a Friday the 13th, on Saturday, Valentine's Day, February 14, 2015, there was another Aurora shooting, this one at a Waffle House.

If you do not know where you want to go, it doesn't matter which path you take.
― Lewis Carroll, Alice in Wonderland (1865)

If you are a frequent reader of my blog, you might think I'm making this news story up, but I did not. 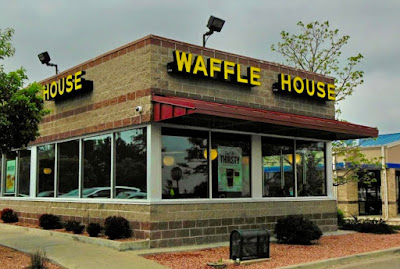 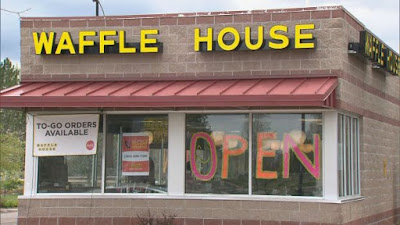 The Aurora Waffle House pictured, May 2020, at the time of the shooting.

On the early morning of May 14, a man named Kelvin Watson, 27, went into an Aurora, Colorado Waffle House on 12880 East Mississippi Avenue without wearing a face mask. He was told several times to wear one due to the coronavirus pandemic, then became belligerent and pulled out a gun.

He left and returned with a mask, but he wasn't wearing it over his mouth, and threatened staff at the restaurant, telling the 25-year-old cook, "You better shut the f--k up before I blow your brains out," while allegedly displaying a gun, police said in the affidavit.

According to witnesses, he told the cook, “I can blow your brains out right now.” A waitress suspected Watson was high.

Watson left, and police were called, but the victim refused to press charges at the time.

The next night on May 15, 2020, Watson returned to the restaurant and again demanded he be served while still not wearing a mask. He was also told to leave because the restaurant was at capacity, the affidavit states. But Watson refused, became very upset, and slapped the 25-year-old cook across the face with an open left hand.

After the alleged assault, the victim ran out of the restaurant's back door and called police. But Watson followed the victim, making numerous statements to the effect of, "you better shut the f--k up and serve me," according to the affidavit. The victim told police that Watson then shot him once as the victim continued to his apartment a short distance away.

Watson was identified as the suspect after interviewing several witnesses and reviewing surveillance video from the restaurant and along the route the Watson allegedly fled. Staff told police that Watson was a regular at that Waffle House location. During the investigation, Aurora police also learned that he was a suspect in a Denver shooting on April 23, 2020, where he reportedly shot up Wyatt's Towing facility for towing his BMW. No one was injured in that shooting.

The Waffle House released the following statement regarding the incident:


"We are deeply saddened and regret that this senseless act of violence occurred, causing injury to a member of our Waffle House family early Friday morning. We have learned that the hospital released our injured associate on Friday afternoon to recover from what has been described as a non-life- threatening injury. Our thoughts are with him, his family and coworkers at this difficult time. We ask that anyone who has any information about this incident to contact the local authorities as soon as possible. We are cooperating fully with the investigation, and direct all additional questions regarding the specifics of this incident to the local authorities handling the case."

Aurora police used Watson’s credit card receipt from the night before to track him down. CBS4 has learned Denver police were also looking for him in connection with another shooting that happened in April. It allegedly occurred at a tow yard where Watson’s car had been impounded. The rounds from that shooting were of the same caliber in the Waffle House shooting.

By May 21, 2020, Watson was already released. Charged with attempted murder in the Aurora Waffle House shooting, Kelvin Watson was out of jail soon after his arrest. Arapahoe County District Attorney George Brauchler said his office argued that the 28-year-old’s bond should have been set at $500,000. Instead, it was set at $100,000.

“I respect the court, we just had a different opinion as to what the bond should be for this alleged behavior,” Brauchler told CBS4’s reporter Dominic Garcia. 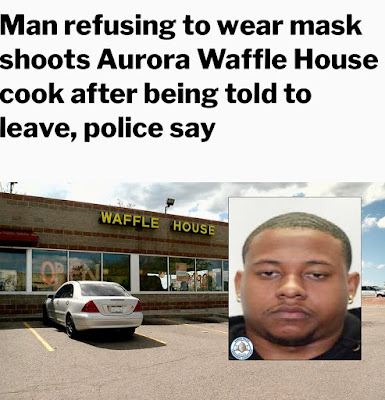 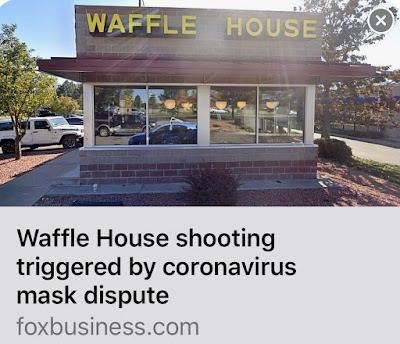 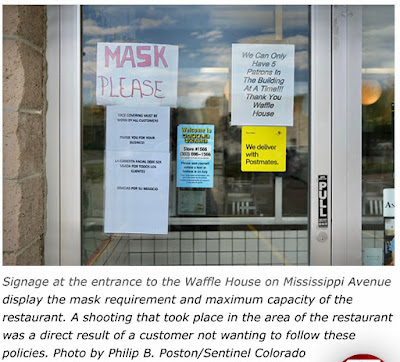 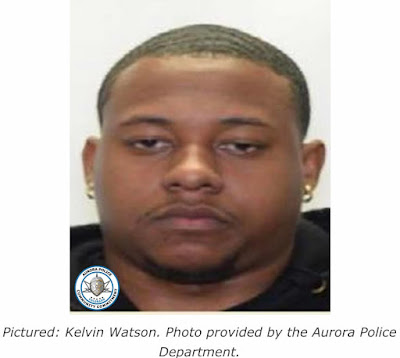 Besides the location being a Waffle House, which has been spotlighted here often, and Aurora/Red Dawn being special too, the alleged gunman's name lands right in the middle of the "Name Game."

The Watt surname derives from early forms of the personal name Walter. The popular Middle English given names Wat and Watt were pet forms of the name Walter, meaning "powerful ruler" or "ruler of the army," from the elements wald, meaning rule, and heri, meaning army.

Our awareness is especially keyed to the name "Watts." In earlier Fortean Times columns and then in my 1983 book, Mysterious America, after discussing the special weirdness surrounding the name "Watkins," I wrote:

Watts (part of the moniker of the Aurora shooter) is tied to the discoverer in England of the "ley lines," one Alfred Watkins. Place is important, and in this case you have the double impact of a Waffle House and Aurora too.

Jim Brandon (see here) penned the following thoughts in his 1983 book, The Rebirth of Pan: Hidden Faces of the American Earth Spirit:


So, I guess no one should be shocked in this weirdest of year, to discover a Watson not wearing a mask while shooting a Waffle House cook in Aurora, Colorado ~ that same community where a Holmes killed people at a theater in 2012.


Good old Watson! You are the one fixed point in a changing age. There's an east wind coming all the same, such a wind as never blew on England yet. It will be cold and bitter, Watson, and a good many of us may wither before its blast. But it's God's own wind none the less, and a cleaner, better, stronger land will lie in the sunshine when the storm has cleared.
― Arthur Conan Doyle, His Last Bow: The War Service of Sherlock Holmes (1917), with a brief preface, by "John H. Watson, M.D."

Posted by Loren Coleman at 9:20 AM