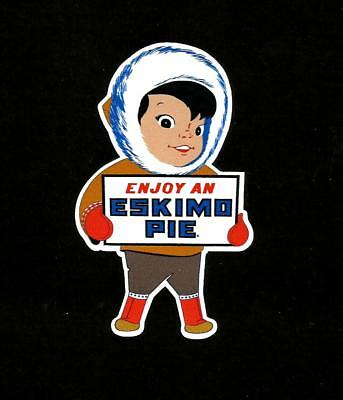 
Since the coincidental viral sharing of the murder of George Floyd of May 25, 2020, and the History Channel's three-day telecast of Grant beginning on May 25, 2020, much has occurred.

The death of Fayetteville-born George Floyd exposed widespread police brutality in the US. Footage of the tear gassing of peaceful demonstrators in Lafayette Square were shared as hundreds of American cities were rocked by protests, uprisings, and demonstrations.

#BlackLivesMatter, in the wake of Floyd's "I Can't Breathe" killing, was re-born.

Trump's "plan" to hold his first rally in Tulsa was changed, and social change kept happening. 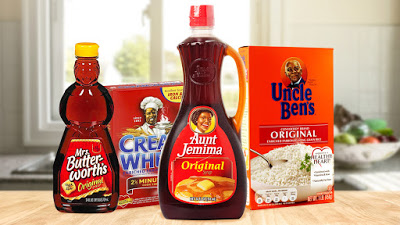 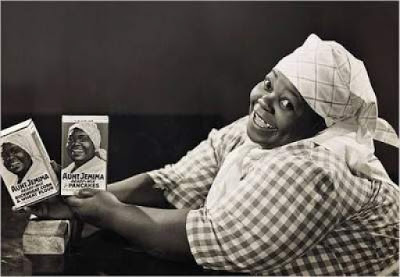 Corporate America, in the wake of their awakenings overnight from June 16 to June 17, 2020, said "Goodbye to Aunt Jemima, Uncle Ben, Cream of Wheat's Rastus," Mrs. Butterworth's, and more. 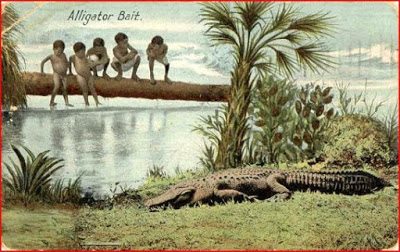 Citing the “horrific racist imagery associated with the phrase,” the University of Florida will no longer use the popular “Gator Bait” chant during athletic events, school president Kent Fuchs announced on Thursday, June 18, 2020. There are numerous references that have cited that African American babies were used as alligator bait. 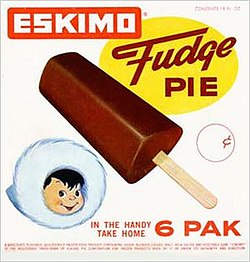 And finally, on June 19, 2020, Dreyer's announced that it would change the "Eskimo Pie" brand name and marketing, saying the term is "derogatory." Eskimo pies were the brand name of a vanilla ice cream product dipped in chocolate. "Eskimo" has been criticized as a racist name for Arctic indigenous peoples such as the Inuit and Yupik.

Statues Topple Around the World 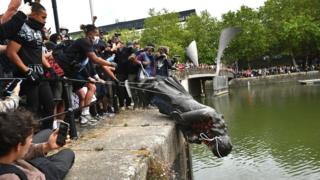 On Sunday, June 7, 2020, slave trader Edward Colston's statue in Bristol, England, was torn down and thrown into the harbor during a second day of anti-racism protests across the UK. Colston was a member of the Royal African Company, which transported about 80,000 men, women and children from Africa to the Americas. On his death in 1721, he bequeathed his wealth to charities and his legacy can still be seen on Bristol's streets, memorials and buildings, the British media noted. 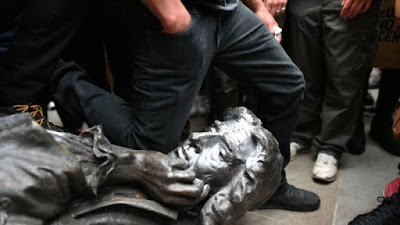 A protester knelt on the neck of the Colston statue to mirror the Floyd murder.

Statues of Confederate generals and soldiers were removed officially or by crowds of activists, coast to coast. Then around the globe, demonstrators and protesters began to take down slavery suppliers, colonial figures, and other statues and monuments representing repression. 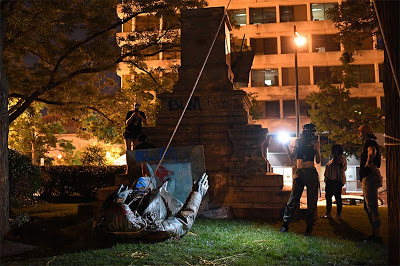 A shift in the US from specifically just Confederate statues to others that stood for colonialism appeared to center on Juneteenth, June 19, 2020. The last most significant demonstration on Juneteenth, was the toppling and symbolic burning of the Albert Pike statue in Washington D.C. Although Pike was a Brigadier General in the Confederacy, and was the only outside statue in D.C. of a Confederate, that statue was not dedicated to his role in the Civil War. Pike as an influential figure in the Scottish Rite of Freemasonry, was the reason for the statue. Pike strong ties in the Masonic tradition may have save the statue in the past, but the figure toppled in 15 minutes on Juneteenth 2020.

Statues fell, flags with Confederate symbols came down, portraits of house speakers who served in the Confederacy were removed from the U.S. Congress. Venerable brands, which have long used labels such as Aunt Jemima and Uncle Ben’s, announced an end to faces on food boxes and bottles that were born in racist stereotypes. Longtime companies that worked with slavers and profited from them, such as Lloyds’ of London, apologized to the Black community and promised to make amends.
Are these moves, prompted by the nationwide protests over the police killing of George Floyd and so many others, just the leading edge of overdue changes in America and abroad? ~ National Geographic June 22, 2020.

Other statues beyond those of the Confederacy also were toppled. 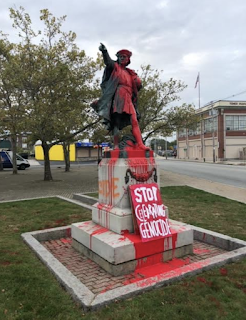 The George Washington statue in Washington Park, Chicago, was found vandalized on June 14. The statue could be seen spray painted, and it had a white hood placed on its head.

In San Francisco's Golden Gate Park along the Pacific Ocean, protesters sprayed red paint and wrote "slave owner" on pedestals before using ropes to bring down the statues and drag them down grassy slopes amid cheers and applause.
The statues targeted included a bust of Ulysses Grant, who was the U.S. president after he was the general who finally beat the Confederates and ended the Civil War.
Protesters pointed out that Grant and his family owned slaves. He married into a slave-owning family, but he had no problem fighting to end slavery. [Left out is that Grant freed his "inherited" due to marriage slave and was raised in an abolition family who disapproved of slavery. Source: Grant History series.]
Also torn down in the San Francisco park was a statue of Francis Scott Key, who wrote the U.S. national anthem "Star Spangled Banner." Key owned slaves. Source. 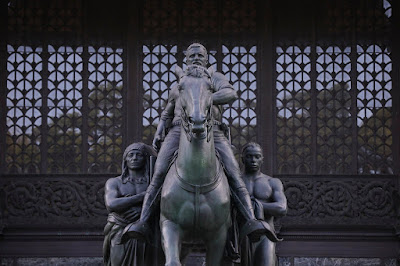 “The world does not need statues, relics of another age, that reflect neither the values of the person they intend to honor nor the values of equality and justice,” said Theodore Roosevelt IV, a great-grandson of the 26th president, said in a statement approving the removal of the Teddy Roosevelt statue in front of the American Museum of Natural History, New York City. 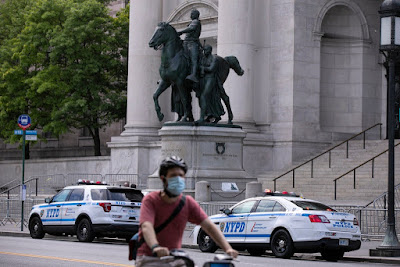 According to the New York Times:

The bronze statue of Theodore Roosevelt, on horseback and flanked by a Native American man and an African man, which has presided over the entrance to the American Museum of Natural History in New York since 1940, is coming down.
The decision, proposed by the museum and agreed to by New York City, which owns the building and property, came after years of objections from activists and at a time when the killing of George Floyd has initiated an urgent nationwide conversation about racism.
For many, the equestrian statue at the museum’s Central Park West entrance has come to symbolize a painful legacy of colonial expansion and racial discrimination. 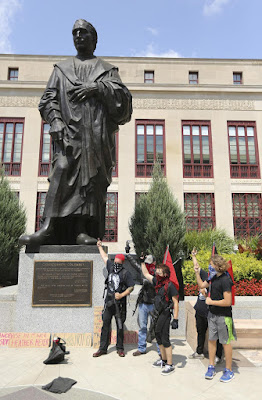 
The city of Columbus, Ohio, has already vowed to bring down its statue of Christopher Columbus.

But thousands are hoping to erase the city's connection to Columbus' legacy even further by renaming it Flavortown in honor of Columbus native Guy Fieri.

This is not a joke. 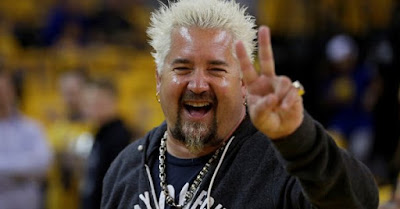 
The main proponent of these Columbus moves is 32-year-old Mayor Andrew J. Ginther. 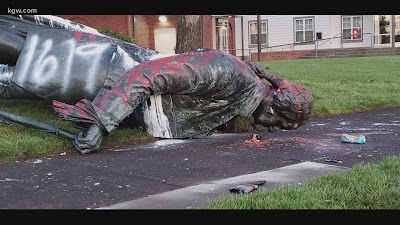 Meanwhile, in the Pacific Northwest, while a Washington statue was pulled down in Portland, Seattle's Lenin statue remains. The Statue of Lenin in Seattle, a 16 ft tall bronze statue of Communist revolutionary Vladimir Lenin, by Bulgarian sculptor Emil Venkov, is the focus of questions about why it still stands. 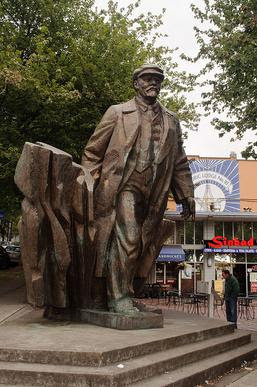 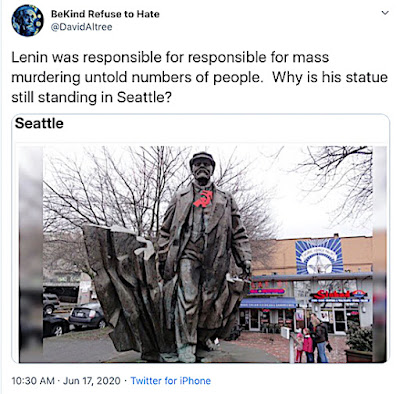 Grant was toppled due to genocidal racism. If you have NDN friends have them tell you about it. Sherman and all those other bastards went west and prosecuted the NDN wars. One of his guys is responsible for the saying "the only good NDN is a dead.....".

That answer your question?

If they want their statues to remain, they should leave the red paint. To remove it would erase our heritage and their history, which we don't share with the elite.