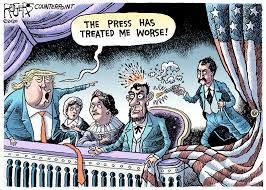 This is what is called a political cartoon, a type of editorial cartoon, which is a graphic with caricatures of public figures, expressing the artist's opinion. They first appeared in 1734. Today they are a prominent form of editorializing. 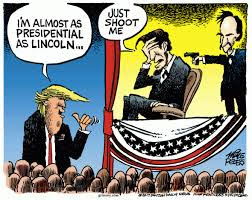 The cartoons frequently speak more truth than the individuals in the panels. 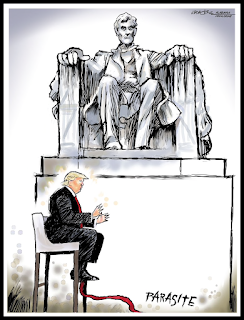 J.D. Crowe on alabama.com wrote: "This is an opinion cartoon."

Then he captured why it was drawn. And remember, this was before the explosion of George Floyd demonstrations across the country.

On May 3, 2020, Trump held a "Fox News virtual town hall" in front of the Abraham Lincoln Memorial, with no one there.

Trump was using the power and dignity of the most lauded president in history for ... something. The word parasite came to mind as I watched Trump, dwarfed by Lincoln, talking with two Fox News commentators. They invaded the sanctity of arguably the most revered president in history - for a political campaign, yes. But for what reason, exactly?

“If it seems odd to stage a town hall with no in-person audience at the Lincoln Memorial, a site for huge rallies and events in more normal times, you’re missing the point: President Trump’s plan for Sunday night is packed with strategic signaling,” Axios reports.

“We wanted a powerful image of American strength and the idea of what reopening looks like,” a White House aide told Axios.

Trump, The Great Divider, often compares himself to Lincoln, The Great Uniter. He claims contending with the coronavirus pandemic makes him a “war time president", just like Lincoln as he kept the country together through the Civil War.
And then it came.

“I am greeted with a hostile press the likes of which no president has ever seen,” Trump claimed, in response to a question about why the president often bullies the press. What can’t he just answer their questions without all the hysterics?

“The closest would be that gentleman right up there,” he said while pointing at Lincoln’s statue. “They always said nobody got treated worse than Lincoln. I believe I am treated worse.”

Yep. With Lincoln as the backdrop, 45 whined that he is treated worse than the 16th president - the one who was assassinated.

To Trump, having to answer reporters’ questions must be a fate worse than death.


On June 12, 2020, as Deadline headlined: "Donald Trump, In Fox News Interview, Has Puzzling Exchange Over Abraham Lincoln’s Legacy: 'He Did Good, Although It’s Always Questionable.'"

Asked about what Trump had done for Black people, he told Harris Faulkner:

I think I’ve done more for the black community than any other president. And let’s take a pass on Abraham Lincoln, because he did good, although it’s always questionable, you know, in other words, the end result.


Harris responded, “Well, we are free, Mr. President. He did pretty well.”

“We are free,” Trump answered. “Well, you understand what I mean? You know, I got to take a pass on a Honest Abe, as we call it.”

Then Faulkner replied, “But you say you say you’ve done more than anybody.”

Trump went on to talk about signing criminal justice reform legislation in late 2018.

“Criminal justice reform. Nobody else could. I’ve done it. I did it,” he said. “I didn’t get a lot of notoriety. And the fact the people I did it for then go on television and thank everybody but me and they needed me to get it done. And I got it done.”

Trump's wavering re Lincoln [above] actually makes perfect sense (in his world). He's saying the end result (freeing the slaves) was good, but by also saying what Lincoln did was "always questionable," he's pandering to the Confederacy folks in his base, implying without actually saying anything that Lincoln could have done something different to get that result. He's trying to say "slavery bad" but not "Confederacy bad," despite the fact that the point of the Confederacy was ensuring states' rights to have slavery. 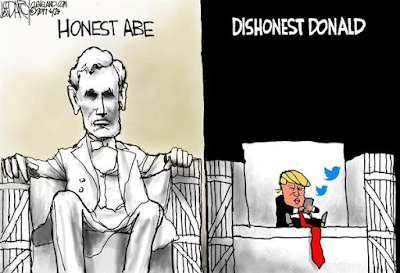 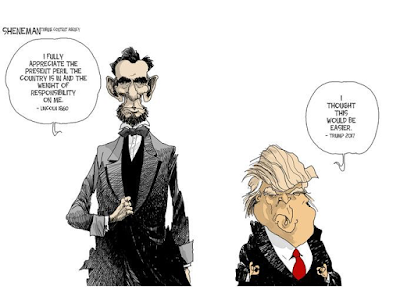 As we have moved through the last few months, Trump has used Lincoln often and editorial cartoonists are using this raw material in their cartoons. Some examples are below.

Remember, these are "opinion cartoons." 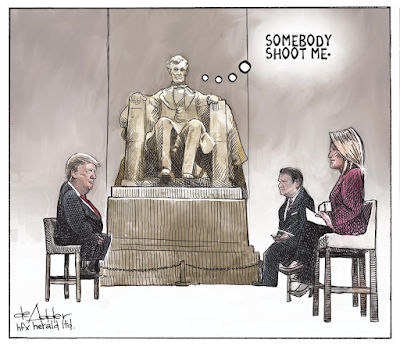 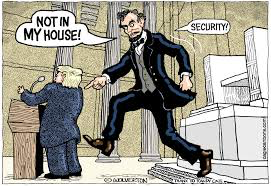 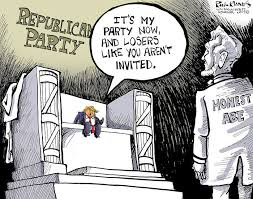 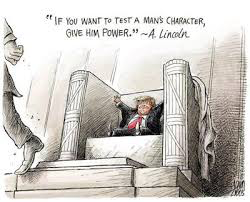 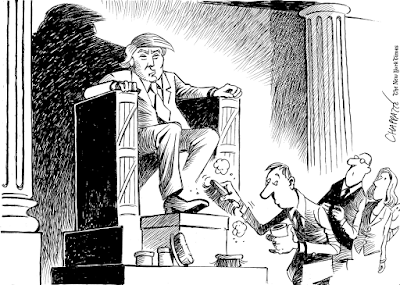 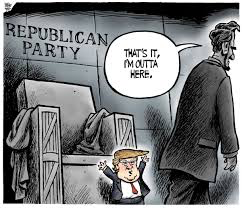 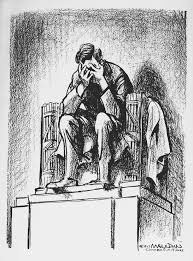