What Kind of Sun Will Be Visible on April 15th? 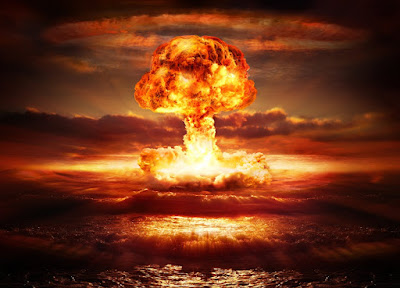 The USS Carl Vinson now off Korea is the same ship involved with Osama bin Laden's burial at sea in 2011.

Inscribed on the banner on the ship that the eagle carries is the Latin phrase Vis Per Mare, which means "Strength through the Sea." 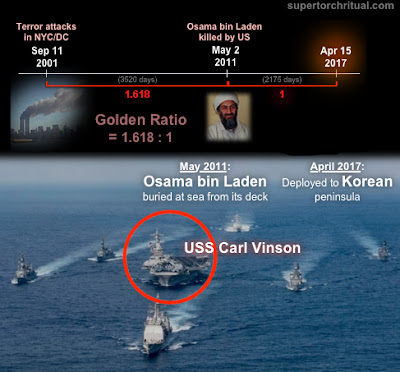 The name Vinson is from the Latin, meaning is a "form of Vincent conquering."

Vincent: from the Roman name Vincentius, which was from Latin vincere "to conquer."

In February, 2001, Carl Vinson hosted Gene Hackman, David Keith, Owen Wilson, and others for filming of the carrier scenes for the movie Behind Enemy Lines during intermediate pre-deployment underway workups. During this two-week period, Vinson crewmembers and CVW 11 crews took part in the filming along with the actors and film crews. Later, prior to commencement of Operation Enduring Freedom, David Keith returned to Vinson on station in the North Arabian Sea to present the first international viewing of Behind Enemy Lines to the combined ship and air wing crew. 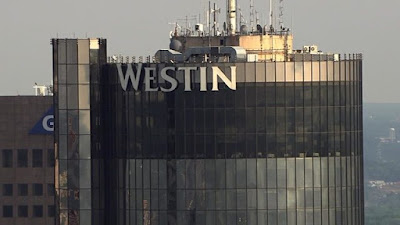 Atlanta's Sun Dial Restaurant suffers a tragic death. It happened at about 2:30 pm (2:37 pm?) here on Friday, Apr 14, 2017; just after beginning of Day of the Sun in Korea. A 5 year old boy was crushed to death in a 4-5 inch space between the rotating restaurant and the wall.


As one correspondent notes, this is a similar death to that of Debbie Stone at Disneyland in June of 1974.
Posted by Loren Coleman at 8:04 AM

Email ThisBlogThis!Share to TwitterShare to FacebookShare to Pinterest
Labels: 2017, April 15, North Korea, The Day of the Sun, USS Carl Vinson

Eerily similar to the young lady crushed at Disneyland in '74.