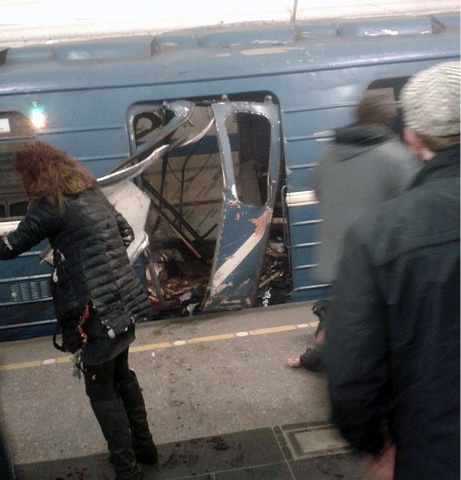 Two explosions have been reported April 3, 2017, on the underground metro system, on the blue line, in the Russian city of St Petersburg.

It occurred as Russian President Vladimir Putin was in the city holding a meeting with the President of Belarus Alexander Lukashenko.

Fourteen people were killed during two explosions on the line.

I had just been reading early, early this morning of how Mark Twain used "St. Petersburg" for "Hannibal, Missouri," in his Mysterious Stranger story regarding the Devil's name being "44." (4/4 = April 4.)

Then a correspondent emailed me, alerting me to these St. Petersburg blasts.


One hundred years ago, on April 3, 1917, much was going on in Petrograd (aka "St. Petersburg - and later Leningrad) "Lenin returns to Russia with the assistance of the German government. On arrival he delivers a speech at Finland Station, which forms the basis of the April Theses."
And from today's New York Times, about Lenin's return and the April Theses: "He detailed this new approach in his 'April Theses,' but had to fight hard to persuade the Bolshevik party. Denounced by some for turning his back on accepted Marxist doctrine, Lenin would quote Mephistopheles from Goethe’s Faust: 'Theory, my friend, is gray, but green is the eternal tree of life.' An early supporter was the feminist Alexandra Kollontai. She, too, rejected compromise because, she believed, none was possible. Source.

(h/t to SL and RS for special info)
Posted by Loren Coleman at 8:30 AM

Andrew said...
This comment has been removed by a blog administrator.
10:57 AM

Andrew said...
This comment has been removed by a blog administrator.
10:58 AM

Meanwhile, in the US, on SUnday 4/3, there was another ramming incident, only a few blocks from where I live.

He was found at the nearby Chestnut Tree Inn motel by police, which is just across the I-205 freeway from where my older son works. Their telephone number? 503-255-4444.... Apparently they aren't part of a chain, though I haven't found who owns them.
http://www.chestnuttreeinn.com/

His name is Henry Nikila II, and while Nikila is reminiscent of the Russian name Nikita, apparently it is a girl's name meaning Woman of Magdala (where Mary Magdalene, from the Bible, is from) but also is a name in Tamil, spoken in India, with symbology of the lotus or a triumphal archway; it is denoted by the Scorpion and Water. According to this site... http://www.nameslist.org/indian/names-meaning/Nikila And it's number is 11; since April is the 4th month, 4 x 11 = 44.