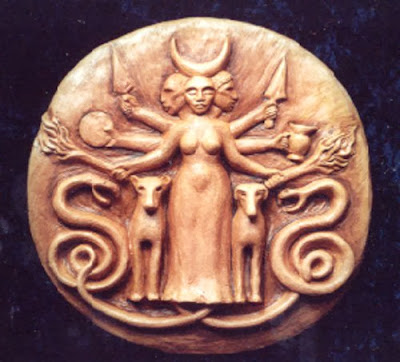 A Lions coach whose team was just about to play another team nicknamed the Lions was shoot and killed after watching a film on All Saints Day. Mystery surrounded the why, a week ago. For those who have noted the Auroras and Dawns, the name game continues. 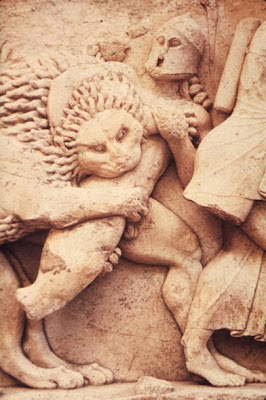 
Jeffrey Bruner, 39, approached his estranged wife, Dawn Michelle Bruner, and Derek Moore, an assistant coach at Missouri Southern State University, in the drop-off lanes in front of Northpark 14 Theatres. People were emerging from the theaters after a showing of Captain Phillips about 9:50 p.m.
Dawn Bruner, a campus police officer, and Moore had been to the movie together and were headed toward their vehicle when Jeffrey Bruner said something, then shot Moore in the torso at close range, said Joplin police Lt. Matt Stewart.
Moore fell to the ground, and Bruner fired additional shots, Stewart said, citing witness accounts.


Oftentimes, I receive stream of consciousness communiques from my readers, identifying a pattern they see unfolding in the material I share.

There have long been past associations between Hekate and lions, and some folks have been thinking in that direction after the recent incident in Missouri.

Today, I post, with slight editing (to expand abbreviations and shorthand sentences), a contribution from D.A. 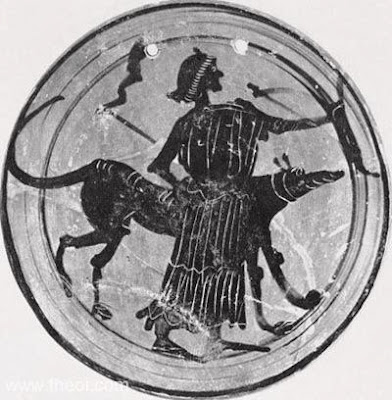 This past Nov 1st I participated in Jason Millers Hekate Rite for Strategic Sorcery students.
I had some quite interesting experiences, more than I was anticipating.
I started with the Sphere of Hekas, and the reciting The Orphic Hymn to
Hekate, followed by the Rite Jason sent out itself. It wasn't until the
mantra portion that things started getting interesting.
Around 300 Mantras in I started entering a trance state. I suddenly found
myself astrally in a wooded copse of trees by a large bon fire. Around it
with me were other shadowing figures, also chanting the mantra. I assumed
these were the other students around the world chanting it during the 3
day time frame. Then I had entered the fire, and was being consumed by
flames.
The flames ate my physical body and suddenly I was reconstructed as an
entirely new fierce body, to replace the one I had first generated when
taken the course. Then the same process occurred for the Joy body. After
this I was granted with a vision of Hekate in front of me, not in her
regular form but with the head of a lion, holding torches and flanked by
lions (Call on me often enough and you shall perceive all things in lion
form). Honestly, if I hadn't been performing a Hekate rite I would of
thought this was Sekhmet. After this vision I was instructed in her higher
mysteries that I won't speak of in public. I continued past 1000 mantras,
and communed with Her.
All in all a bit more than I had expected, but I was pleasantly surprised.

Missouri Southern State University's yearbook is called the Crossroads, and so is their alumni association's magazine.

Hekate is the goddess of crossroads.

Another mention of the lion association with Hekate is to be found here, and this seems like this could be a pretty revealing can o' worms! 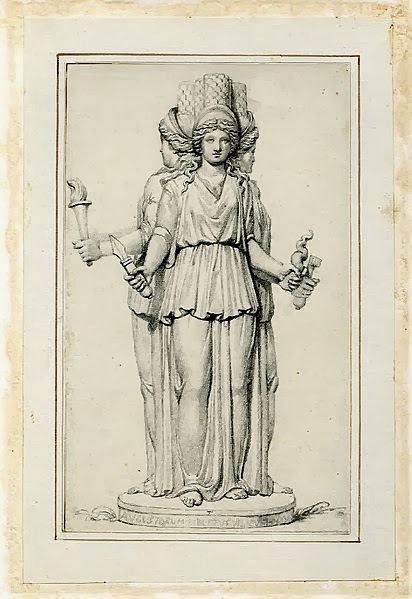 Another possible Hekate association--
Bear also being sacred to Hekate:
Bruner [the last name of the suspect and his estranged wife] is close to Bruin
Which is also close to Middle Dutch Bruun
And maybe I'm stretching a bit for more synch,
but in the 1970s when I went to the (Joplin) high school that was
destroyed by the tornado, it was called Parkwood --
the Parkwood Bears, sometimes refered to as
the Bruins.

A few more thoughts:
*murder over a love triangle--Hekate is the triple goddess
*murder during Hallowmas, a 3-day celebration
*murder on Day of the Innocents/Day of the Little Angels
*son of slain named Elijah
*Lions vs Lions game cancelled on Saturday, Day of the Dead
*Moore, graduating from St. Cloud State University, died on All Saint's Day
*Joplin is a "crossroads" town in the middle of the US with I-44 & I-49/71
crossing (also on the old Route 66)

In the book The Goddess Hekate by Stephen Ronan (Chthonios Books, 1989), there is a link made between "Hekate and lions."

Hecate or Hekate (ancient Greek Ἑκάτη, Hekátē) is an ancient goddess, most often shown holding two torches or a key and in later periods depicted in triple form. She is variously associated with crossroads, entrance-ways, fire, light, the Moon, magic, witchcraft, knowledge of herbs and poisonous plants, necromancy, and sorcery. She has rulership over earth, sea and sky, as well as a more universal role as Saviour (Soteira), Mother of Angels and the Cosmic World Soul. She was one of the main deities worshiped in Athenian households as a protective goddess and one who bestowed prosperity and daily blessings on the family.

The Hecate Chiaramonti, a Roman sculpture of triple Hekate,

Northstar [the theater's name] would be Polaris.
Polaris is in Ursa Minor.
Ursa Minor is both a bear & a dog--both linked to Hekate.
Ursa Minor is surrounded by Draco, essentially a snake--also linked to
Hekate.

Maybe stretching a little, but Ursa Minor has 7 stars (including the north
star) in it, and Derek Moore's son, Elijah, is 7 years old.
Elijah raised the dead, brought down fire from Heaven, was taken up in a
whirlwind (tornado), and will announce the eschaton (complete with Messiah).

The head of Hekate on the right, and on the reverse, the head of a lion sprouting water.

Posted by Loren Coleman at 8:38 AM

Wow, you blew my mind with this one. I've been meditating on this fire at the Poinciana in North Bergen on Sept. 28 (I know someone who lived there).

Poinciana:In many tropical parts of the world it is grown as an ornamental tree and in English it is given the name Royal Poinciana or Flamboyant. AKA the Crown of Krishna, Phoenix Flower, Peacock Tree, it is also one of several trees known as Flame tree.

The building next door to the Poinciana is the Ponce de Leon, which did not burn down. Leon is lion in Spanish. Considered as a Hecate Ritual, the fire as a purifying and transformative element that reveals the lion spouting water - Ponce de Leon sought the fountain of youth.

Anyway, belated congratulations on your wedding!

Joplin also bore the brunt of a very destructive tornado last year, which was the 3rd to strike Joplin since 1971.

Joplin, of course, is on Route 66, something we have discussed here before. Joplin is the largest city near the town of Seneca, Mo. and the unincorporated community of Hornet where the "Spook Light" has been seen for many decades now (myself included on 3/31/95).
Back in 1910, when the the railroad later known as the Kansas City Southern was being constructed in Joplin, they were excavating in the "bottoms" to make room for the depot in Joplin and bones were discovered. Many bones. No one had any knowledge of burial sites or cemeteries.Workers became "very nervous" and did not want to be connected to digging up human remains. But the work had to continue, bones or no bones ...
Anyway, I have written about the Kansas City Southern's founder - Arthur Stilwell, and his belief in fairies and "brownies" guiding his business decisions to build the railroad from KC to Port Arthur, Texas (he is the "Arthur" in Port Arthur). The railroad follows a parallel north/south where strange things have been going on for many, many years.

Port Arthur is where Janis Joplin was born