Lions Kill A Gem of A Lion, Route 66 Again, and More

Johari, the female lion tragically killed at the Dallas Zoo.

Johari is Swahili for a "gem; something of worth."

Readers here are very aware of the symbolic gemstones in past events, including the killing of kings and queens, inside and outside the jungle - let along in Dallas. See my "Gemstones Are Forever," July 13, 2012.

A female lion was killed by another lion Sunday [November 17, 2013] at the Dallas Zoo, officials say.
“We are heartbroken,” zoo officials said in a written statement about the death of 5-year-old Johari.
Dr. Lynn Kramer, the zoo’s vice president of animal operations and welfare, said Johari had been on display with the zoo’s four other lions — two males and two females.
Johari was bitten on the neck by one of the males, Dinari or Kamaia, about 2:15 p.m. Before the staff could intervene she was dead.
Kramer said the lions, all 5 years old, had engaged in roughhousing in the past, which is normal. But Kramer said that in his 35 years working as a veterinarian at zoos, he had never heard of something like this happening.

“I would have to think something caused the males to react that they don’t normally see every day,” he said. “Lions can be aggressive, but they don’t kill each other.”
The zoo denied an early media report that one of the lions had been eating Johari. Dallas Morning News. 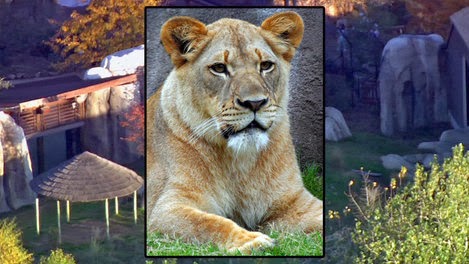 All attention this week will be directed on Dallas, as the 50th anniversary of the assassination of John F. Kennedy is recalled on Friday, November 22, 2013. Taking a trip down Mason Road 33 will hold new meaning, perhaps, as we review the twilight language of the JFK event here, later in the week.


The Lion thing is still producing.
--The MSSU Lions defeated the Lindenwood Lions of Belleville, IL on 11/9.
--Belleville is near St. Louis/Route 66, 37 miles west of New Minden and its bell.
--MSSU won 55-0. Interstate 55 is the old Route 66.
--Coal City is on 55.
--A lion kills a lioness at the Dallas Zoo 3 hours after the Illinois tornadoes, having lived together peacefully for 3 years. 5 lions, 2 males and 3 females.
--Joplin and Johari the lioness...She was 5 years old.
--Was she named before the 1.14.2010 episode of Fringe? It has lion references.
--The Johari Window psychological technique was created in 1955.

Posted by Loren Coleman at 7:40 AM

Without any hard evidence, I'll bet the zoo has been dosing their animals with Prozac-like drugs, which might explain this behavior.

The town of Diamond(next to Coal City on Interstate 55) was hit by
one of the Illinois tornadoes just before Johari, the gem, was killed.