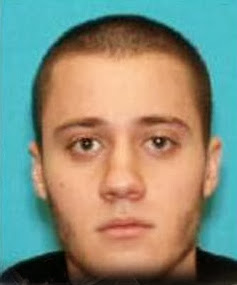 Ciancia allegedly has "strong anti-government views," reported NBC's Pete Williams. This assessment was determined by the "anti-goverment materials" in his possession when he was captured. The AP noted Ciancia, who was dressed in military-style fatigues, carried a handwritten note that said he "wanted to kill TSA and pigs." Source. 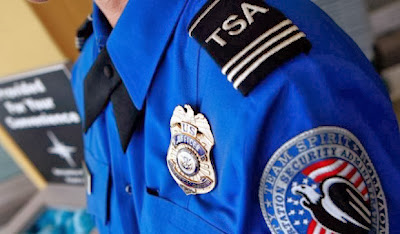 Minutes after a TSA agent was allegedly shoot and killed at LAX at Terminal 3, an "expert" - a former FBI agent - on CNN was telling the television viewing audience this incident was a "lone-wolf" attack. How can anyone say such things so early when they didn't even know if the shooter was alive or dead? Was TSA or not?

Another seemingly random event has happened. Another suspect in custody. Or another suspect dead. Another group of people injured in a shooting and, at least, one person has been killed. Reports in the beginning were so confusing.

Earlier reports that a suspect was taken into custody at Los Angeles International Airport on Friday, November 1, 2013, are incorrect. This supposedly occurred after a shooting at a Terminal 3 checkpoint left a TSA employee injured, one killed, and has produced "mutiple victims."

"Suspect is now in custody. Multiple victims," LAX officials said in a tweet.

One update end stated, "Law enforcement sources told the Los Angeles Times that the gunman was a Transportation Security Administration employee at LAX. The gunman was killed by authorities after he opened fire Friday morning. He allegedly shot and killed a fellow TSA employee."

LAPD Assistant Chief Earl Paysinger says the suspect, who was armed with a semi-automatic rifle, was apparently injured in an exchange of gunfire.

CNN reports that the gunman approached a checkpoint at the terminal and opened fire. Airport officials said the incident began at 9:30 a.m. PT. 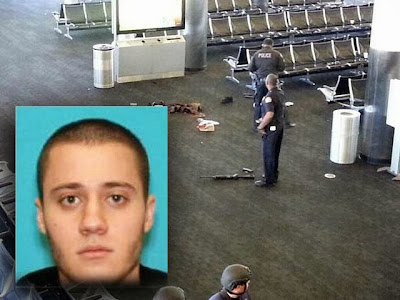 Finally, late on Friday, the suspect in the shooting at Los Angeles International Airport was identified as Paul Anthony Ciancia, a 23-year-old from Los Angeles, the FBI said.

Ciancia is an Italian word that means, literally, "gossip" or "tittle tattle." 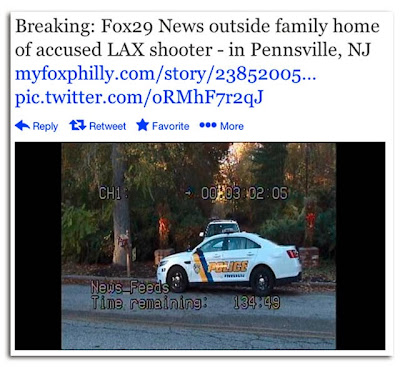 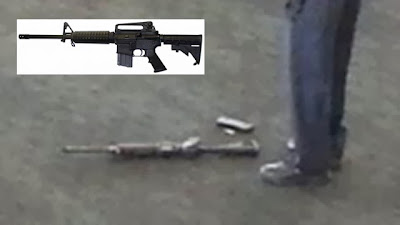 He allegedly used an AR-15.

Investigators found materials and information on the suspect expressing anti-federal government sentiment and anger at the Transportation Security Administration, a federal law enforcement official said. A TSA officer was killed in the shooting.

The suspected gunman was detained after being shot in the chest multiple times, according to an intelligence source briefed by Los Angeles police.

So, what are synchromystic chances of this happening?

The alleged October 26th JFK gunman's name is Keenan Draughon, with Keenan being another form of Cianán.

+++
Hollywood synchs at LAX, during shooting:

Mythbusters stars Grant Imahara and Tory Belleci were in the Virgin lounge of Terminal 3 when the shooting began. Belleci sent a photo and messages out about the mayhem.

Actress Tatum O'Neal was in Terminal 4.

Mad Men was filming at Terminal 4, as shooting began in Terminal 3. Source.

Posted by Loren Coleman at 3:08 PM

a 'MAD MAN' shooting a terminal over from 'MAD MEN' "shooting"

The guy who tried to walk into the JFK airport in your previous post was called:
Keenan (Cianán)
CIA-n-án similar to CIAnCIA