Update: A gunman opened fire in a crowded New Jersey mall late on Monday before killing himself, officials said, sparking a mass evacuation of the complex by police who did not realize he was dead for several hours.
The man shot at least six rounds from a modified rifle seemingly at random and without hitting anyone, before turning the gun on himself in a back area of the mall, Bergen County Prosecutor John Molinelli told a news conference early on Tuesday.Authorities named the dead man as 20-year-old Richard Shoop and said he had a history of drug abuse. Officials found his body in the Westfield Garden State Plaza in Paramus at around 3:20 a.m. local time (0820 GMT).

Update: 11:24 pm Eastern - The mayor of Paramus said that "one shot" was taken. A single shell casing was found. The shooter may have left the mall. No injuries.


Police responded in force Monday evening after shots were fired inside the Westfield Garden State Plaza Mall.
The shots were reported inside the mall, sometime before the mall in Paramus, N.J. closed for the night at 9:30 p.m.
In a tweet, Ocean County police, fire and EMS reported multiple agencies were responding to the mall in Bergen County for reports of an active shooter and shots fired.

At least eight shots have been fired, FOX8 reported. 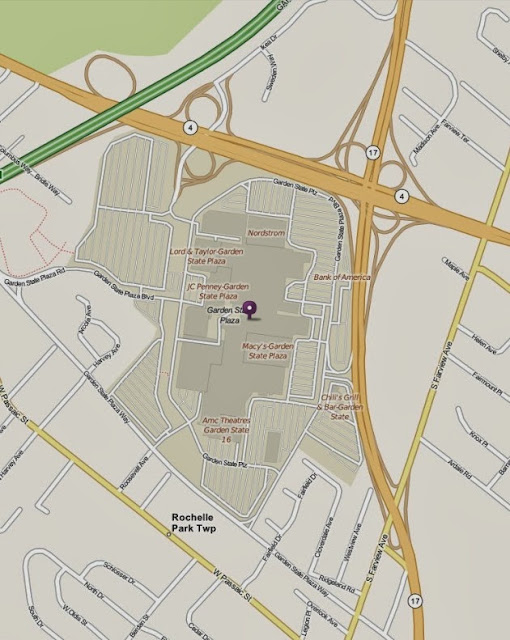 The gunman is believed to be wearing body armour and reportedly has shot at and destroyed security cameras.

"Perp was last seen near the Apple Store in the mall," a law enforcement officer told the New York Daily Post.

There have not been any reports of injuries. The mall is now being evacuated.

Paramus's name comes via the Lenape language word for the area, Peremessing, which meant that it had an abundant population of Wild Turkey. That Lenape word was anglicized to become the word "Paramus." A large metal statue of a wild turkey in the Paramus Park mall commemorates this history.

Earlier in the day, Central Connecticut State University was on lockdown, eyewitnesses described a man in military fatigues with kneepads, body armor, paintball goggles and a Japanese-style sword.

There later were reports of a main suspect, a "gunman" dressed in camoflauge, who was a student. He is a student, and has been identified as 21-year-old student David Kyem of Newington, the son of CCSU geography professor Peter Kyem.

Westfield = the Westgate to tilling the Velvet Underground

Could it be as they say that the first hand testimony of a witness is the highest form of evidence in a court? Have you seen the link below and what this man describes?

enjoy the work you do brother,

Could it be that first hand testimony of a witness is the highest form of evidence ?

Did you see what this guy said he saw?
http://www.youtube.com/watch?v=BYLzkpSFFiQ