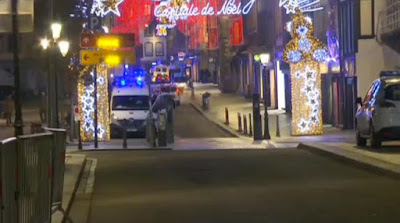 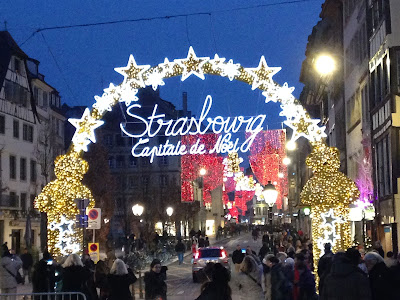 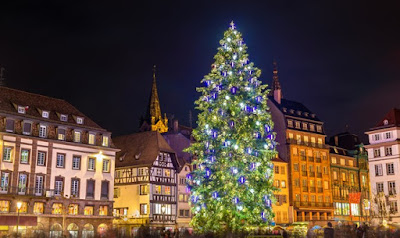 The killing took place at Place Kléber and surrounding locations, near the city’s Christmas market, which draws millions of tourists every year.  Early confusion was caused by the fact the gunman, known to police, shoot at different locations around the Christmas market area.

The interior minstry described the incident as a “serious security event” and warned the public to stay indoors. 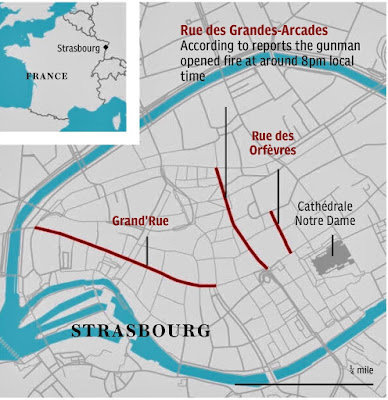 This is located 20 minutes from the European Union Parliament in Strasbourg.

Traditionally, a huge fir tree (30 m) coming from the Vosges mountains is erected every year on the south west of the Place Kléber and inhabitants deposited gifts for the poors. During the Marché de Noël ("Christmas market"), the booths of 50 charitable associations make the Village du Partage ("village for sharing"). 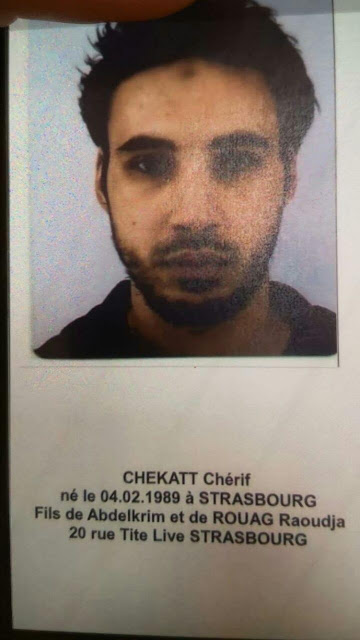 The suspect in the Strasbourg shooting has reportedly been identified as 29-year-old Cherif Chekatt. The name apparently is Arabic in origin, probably of Algerian/French.

New information was revealed Wednesday at a press conference by France’s anti-terror prosecutor Rémy Heitz who said that witnesses had observed the suspect yelling “Allahu Akbar” as he fired upon the crowd at the Strasbourg Christmas market on Tuesday evening.

On the evening of December 13, 2018, police found Chekatt in the area of Strasbourg between Neudorf and the Stade de la Meinau. He fired on officers when they tried to question him and they returned fire, killing him. Soon after his death, ISIL claimed him as one of their soldiers. 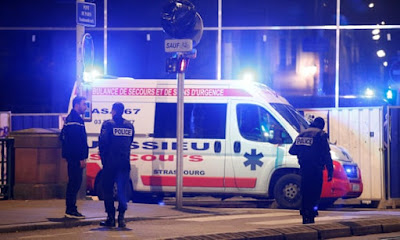 In the 17th century the name changed to Waffenplatz ("arms square" in German).

On June 24, 1840 the square was finally renamed for the French general Jean-Baptiste Kléber, also going by "Kléberplatz" after German annexation.

During German occupation in 1940-1944, the place was renamed after Karl Roos, a local ethnically German politician executed by French authorities in 1940 on the charges of espionage for Germany.


After his assassination in 1800 in Cairo, the body of Jean-Baptiste Kléber, general during the French Revolutionary Wars born in Strasbourg in 1753, was repatriated to France. Napoleon, fearing that his tomb would become a symbol to Republicanism, ordered it to stay at the Château d'If, on an island near Marseille. It stayed there for 18 years until Louis XVIII granted him a burial place in his hometown in Strasbourg. He was buried on 15 December 1838 below his statue located in the middle of Place Kléber. His heart is in an urn in the caveau of the Governors beneath the altar of the St. John Chapel in Les Invalides, Paris.

The statue, designed by Philippe Grass, was finally completed in 1838.

On January 20, 1992 Air Inter Flight 148 crashed into the Vosges Mountains while circling to land at Strasbourg International Airport, killing 87 people. 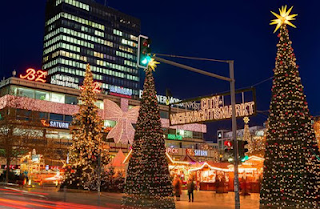 A terrorist attack on December 19, 2016, at 20:02 local time, during which a truck was driven into the Christmas market next to the Kaiser Wilhelm Memorial Church at Breitscheidplatz in Berlin, left 12 people dead and 56 others injured. One of the victims was the truck's original driver, Łukasz Urban, who was found shot dead in the passenger seat. A suspect was arrested and later released due to lack of evidence. Another person, suspected to be the actual perpetrator, was killed four days later during a shootout with police near Milan in Italy. See more Christmas 2016 terrorist events, here and here. Also, see "Red Army Choir Lost in Plane Crash" (December 25, 2016).
Posted by Loren Coleman at 3:43 PM No comments: 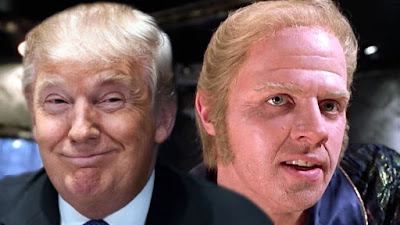 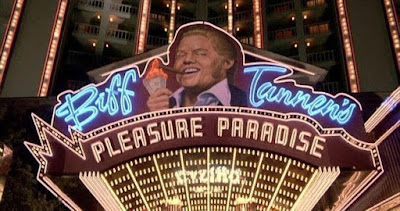 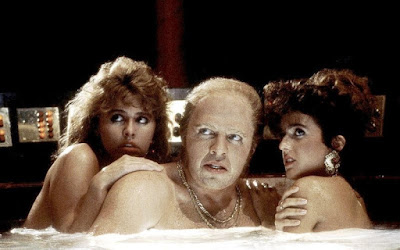 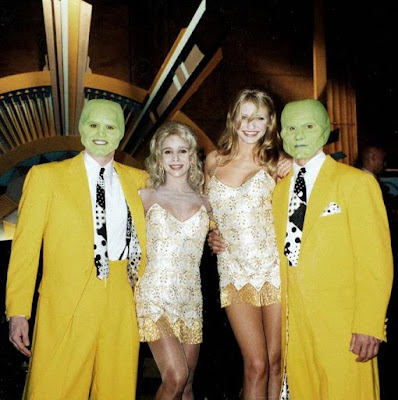 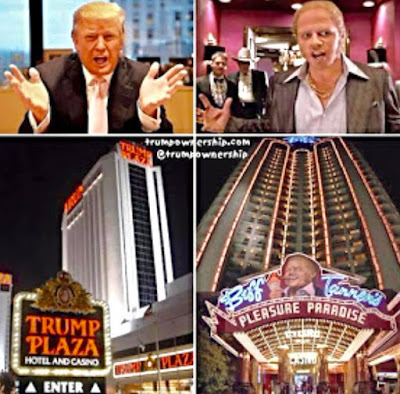 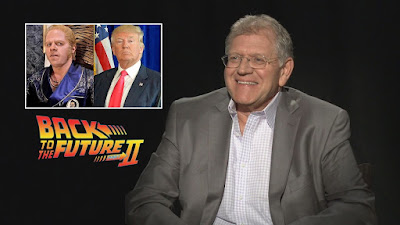 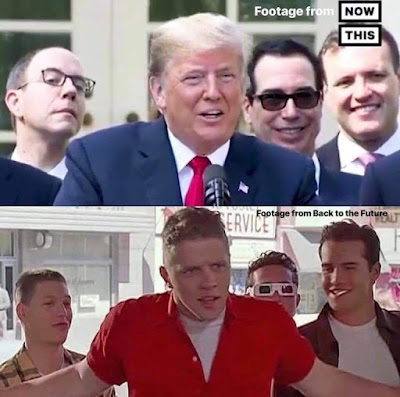 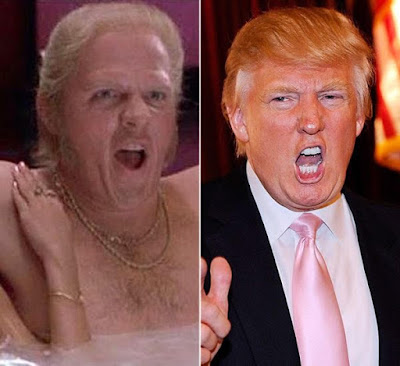 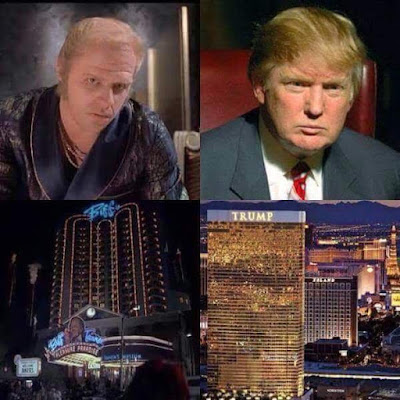 Posted by Loren Coleman at 1:17 PM No comments:

Can You Buzz Me In? Cryptokubrology Times? 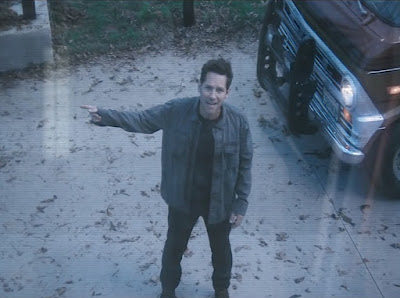 I be on the lookout, my droogs, for heavy bezoomny #cryptokubrology action going down on the last day in the 237th month since Kubrick snuffed it. Have the #KubrickStare set with a lacty-free Moloko toast (sans Vellocet) at ready. 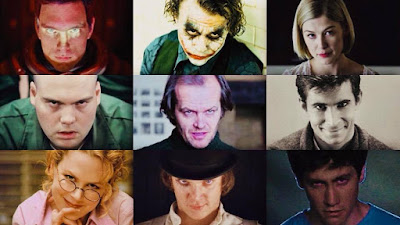 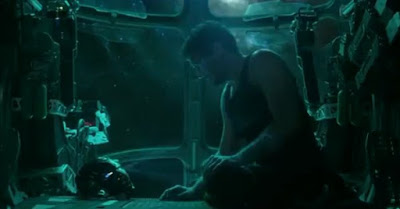 "The Final Stand Against Thanos Begins in the First Trailer for Avengers 4"This is it @CryptoLoren—the long-awaited trailer for AVENGERS: ENDGAME released exactly 237 months after Kubrick's death—"ending" a month which saw the death of (among many others) Marvel mastermind Stan Lee, born exactly 2307 days before Stanley Kubrick. 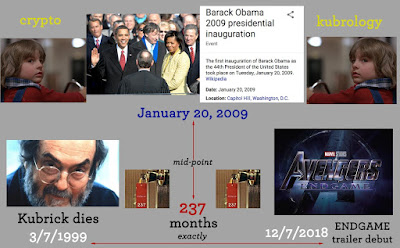 "I don't know why it works, I just know it works. #cryptokubrology #midpoint #zenosparadox" 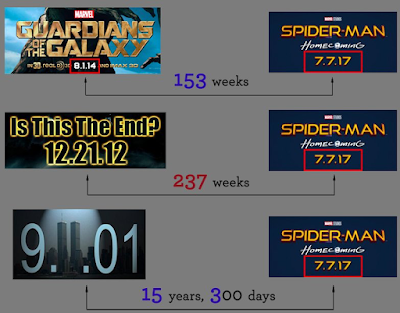 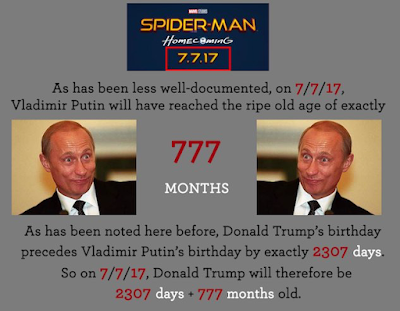 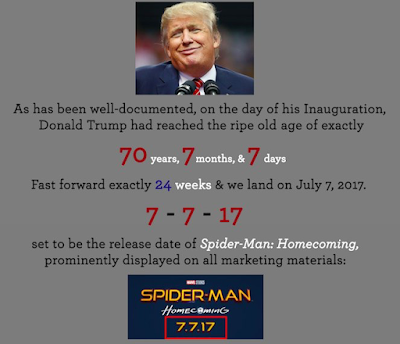 "Compare to INFINITY WAR, which released 4/27/18 or 999 weeks after Kubrick died (in 1999). If you check out these graphics I did last year, you see several incredible Crypto-K alignments regarding other Marvel films & crucial historical moments."

"The movie will in all likelihood involve the use of 'time-travel' to defeat the 'ultimate nemesis' Thanos. It will close the first chapter of the wildly successful Marvel Cinematic Universe masterminded by Stan Lee & Jack Kirby." 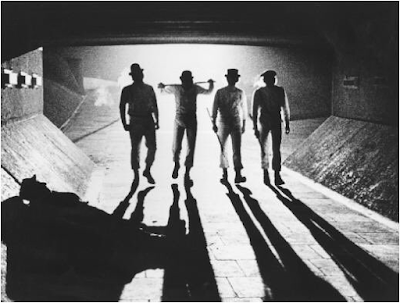 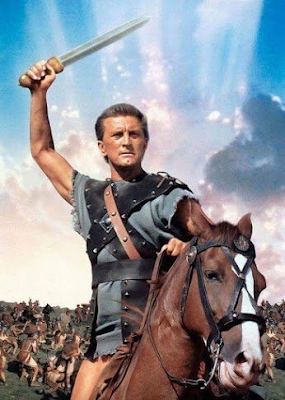 Posted by Loren Coleman at 11:53 AM No comments: