"My good friend since we met three decades ago, David McGuirl, passed away on February 5, 2022 after a battle with ALS. Dave and I met at the Providence Conspiracy League at Newspeak Bookstore, and we co-founded Paranoia Magazine in 1992. He wrote under the pseudonym, Al Hidell, a tip to the 'other' I.D. found in Lee Harvey Oswald’s wallet. Together with a great team of artists and writers, Paranoia enjoyed an international following, publishing 52 issues and several books between 1992 and 2011. A talented graphic artist, Al Hidell designed many of the magazine’s provocative covers, inside illustrations, and stellar layouts. He penned the highly-anticipated Paranotes section—inventive narratives that tied curious events together synchronistically. There could not be a better friend or business partner in the world. Al Hidell will be missed by his family, friends, and dozens of team members from his twenty years in the 'conspiracy' business."
Joan added a footnote privately to me: "It was unexpected. He was not in late stages of ALS, although it had progressed quickly in just under a year." 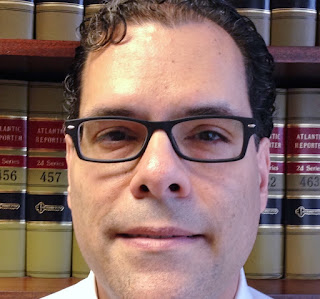 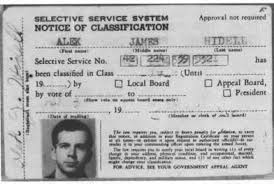 Lee Harvey Oswald's SSS card showing his use of the "Alek Hidell" name.
Bill Gaess writes on February 6, 2022:
"A friend of mine, David McGuirl, passed away yesterday morning. I barely knew him when he reached out to me last spring to help him ship some high end audio gear that he wanted to sell because he was having problems with his legs. He eventually gave me the keys to his condo and I had to sell the gear as well as ship it because he couldn't walk and wasn't improving. I organized his condo and helped him sort through his belongings, especially albums, which he had a ton of. His uncle was the late Paul Motion, talented and super famous jazz drummer, so he had many many jazz records among other genres. We shared a love for music and audio gear, and humor too. I got to know him very well and appreciated his trust. He had been at a nursing home, then his mom's house, then a hospital, and finally another nursing home. I couldn't visit him toward the end because he had tested positive for Covid (with no symptoms) and was in restricted quarters. We emailed, texted and talked on the phone until he lost the ability to use his hands. Thank God I visited him, Thursday. I brought him some tasty food and we had a few laughs. I told him to take it easy as he struggled to speak and stay awake. I stayed by his side as long as I could, then I woke him and said goodbye. I had planned on visiting again yesterday and playing some music for him on a Jambox, but God had other plans for him. He was the author of a published, fringy book, loved his cat (who died recently), his friends, his family and music. He was an intellectual with a gentle soul. I wish I knew him better before he became ill. I told him so and he wished the same thing. I also let him know I would help his sister and mom as much as I could. He was very concerned that he would burden them. He told me he had expected to be fully paralyzed with a breathing tube and an inability to talk or eat, which he managed to avoid. I know he is in a better place, listening to some jazz with his cat on his lap. I will miss David greatly and am honored to have become one of his best friends. He said I always made him smile. Keep on smiling, David!" 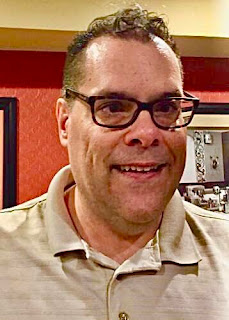 The Woodlawn Funeral Home published the following on February 12, 2022:
David J. McGuirl, 55, passed away on February 5, 2022, at Briarcliffe Manor in Johnston, Rhode Island, after a battle with ALS.
Born in Cranston, Rhode Island, on February 9, 1966, he was the son of Sarah A. (Motian) McGuirl and the late Peter T. McGuirl. He graduated from Cranston High School second in the Class of 1984, and went on to get a Bachelor of Arts degree in 1990 from Hampshire College in Amherst, Massachusetts. He resided in West Warwick and was the office manager at the International Brotherhood of Police Officers in Cranston for many years.
David was an audiophile who avidly collected and sold vinyl records and audio equipment. He collected and listened to music of all kinds, from early R&B and Rock and Roll, to Modern Jazz and Classical. His love of jazz had its roots in his family, and Dave was proud of the fact his uncle was the legendary jazz drummer, Paul Motian. Dave’s love of stereo equipment ranged from his early playing of 8-tracks on his 2-xl toy robot to sophisticated vacuum tube electronics and audio streaming equipment.

David was the co-founder and co-editor of Paranoia Magazine from 1992 to 2012 under the pseudonym, Al Hidell. The award-winning conspiracy and paranormal magazine enjoyed an international following, publishing 52 issues and several books. A talented graphic artist, he designed many of the magazine’s provocative covers, inside illustrations, and stellar layouts. He penned the highly-anticipated Paranotes section—inventive narratives that tied curious events together synchronistically.
David is survived by his mother Sarah (Motian) McGuirl of Cranston, sister Tracey McGuirl of Cranston, sister Cindy McGuirl of Thomaston, Maine, niece Kalie McGuirl of Oakland, California, cousin Rosemarie Caito of Johnston, aunt Barbara McGuirl of Cranston, good friends Al Hill and George Hanley both of Cranston, friend and business partner, Joan Ratcliffe, and several cousins. He is predeceased by his father, Peter McGuirl, his aunt, Rose Bowden, and his uncle, Paul Motian.
The family will hold a private memorial. In lieu of flowers, please consider donating to the ALS Association at https://www.als.org/donate. 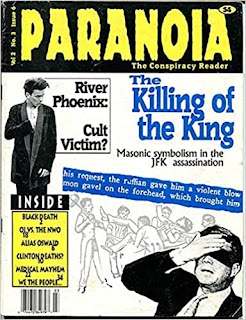 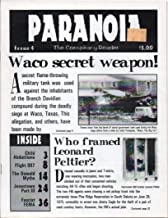 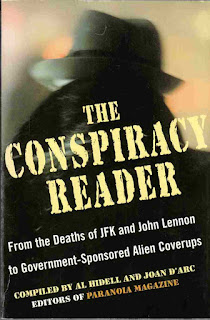 The literary work of David McGuirl can be sampled by reading various issues of Paranoia Magazine, and the compilation, The Conspiracy Reader.
David was a bright and creative man. I was happy to have had my works critiqued by Joan and David in Paranoia, and to see my name appear in its pages and their Conspiracy Reader.
David, rest in peace.

Posted by Loren Coleman at 5:34 PM No comments: