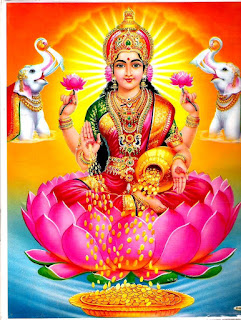 Kamala means "lotus" or "pale red" in Sanskrit. In Sanskrit this is a transcription of both the feminine form कमला and the masculine form कमल, though in modern languages it is only a feminine form. This is the name of one of the Krittikas, or Pleiades, in Hindu epic the Mahabharata. It is also another name of the Hindu goddess Lakshmi. Lakshmi is the goddess of wealth, fortune, power, luxury, beauty, fertility, and auspiciousness. She holds the promise of material fulfilment and contentment. She is described as restless, whimsical yet maternal, with her arms raised to bless and to grant.
The Perseid meteor shower, one of the most popular meteor showers of the year, faced some competition from the moon in 2020, during its peak. The shower peaked with the most number of meteors during the late evening hours of August 11 and early morning hours of August 12 -- which coincided with the last quarter moon phase, or a bright half moon.
Originally scheduled to be held July 13–16, 2020, at the Fiserv Forum in Milwaukee, the convention was postponed to August 17–20, 2020, due to the ongoing coronavirus pandemic in the United States. 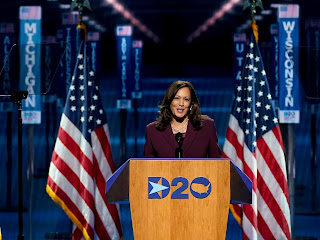 In Kamala Harris' vice-presidential nomination acceptance speech on the third night of the convention, Kamala Harris declared that she and Biden will, if elected, tackle issues facing the United States, including racial injustices. Harris provided an autobiographical summary of her life and career. 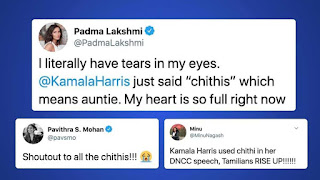 When Harris accepted the Democratic nomination for vice president, she thanked her chitthis, the word for aunties in Tamil, a language of South India — not in Hindi, the official language of the country.
Back on October 16, 2018, I wrote of "Twilight Language in Andy Thomas' Paintings."
I point out that the painting that CNN found on display at the White House (see here), shows the "first female President."
Considering that Vice President-elect Kamala Harris may be that individual, the predictive painting seems all the more on target. 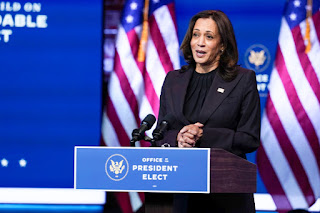 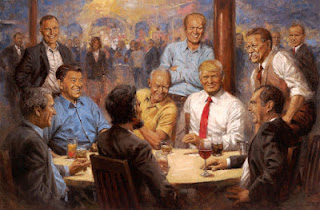 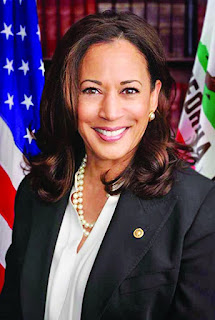 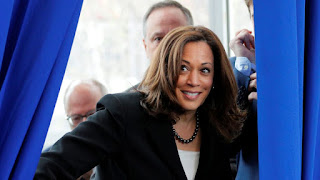 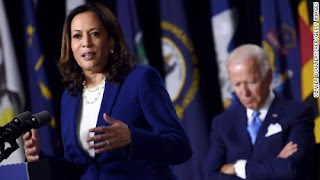 Kamala Harris' frequent outfit ~ white under a dark suit ~ are reflected in both versions, Republican and Democratic, of Thomas' paintings. 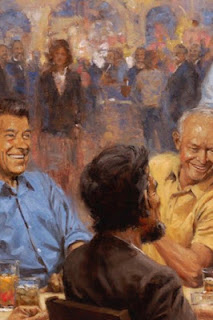 When the new President and Vice President are sworn in on January 20, 2021, Joe Biden will be 78 years of age, and Kamala Harris will be 56 years of age. 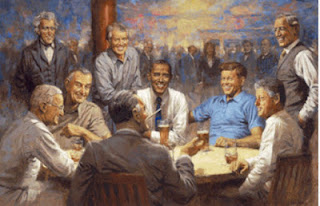