Who is Bill Grimstad?

Who is Bill Grimstad?

Jim Brandon is the author of 1978's Weird America and 1983's The Rebirth of Pan: Hidden Faces of the American Earth Spirit. Both of these books have had a long-lasting effect on the thinking of Forteans and synchromystics, first in articles and books, and now in blogs, podcasts, and digital visual works.

The Fayette Factor, as I have coined the theory or idea, was first characterized by researcher and writer William Grimstad back in 1977, as the "Fateful Fayette," Fortean Times, No. 25, Spring 1978, and in his two books shown here - Weird America and The Rebirth of Pan - credited as being authored by "Jim Brandon," who we know as Bill Grimstad. 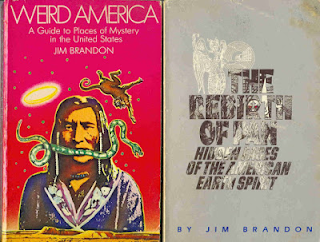 Before Brandon became well-known in Fortean circles for his classic books, he had created and shared with associates his now-long-unavailable and difficult-to-obtain tape of his interviews with James Shelby Downard (March 13, 1913 – March 16, 1998). Yes, it was a reel-to-reel tape.
++++
Update
Jim Brandon

On April 13, 2011, comment maker "Lauren" at Goodreads shared that "William Grimstad...is a published Holocaust denier."
His Fortean work is separate from his denier writings. But still, he is what he is.
In 2018, Jim Brandon/William Grimstad resurfaced with the reissuing of a revised edition of his audio book from 1974-1975, Sirius Rising, which he gave a new subtitle, Mr. Downard and the Synchromystical Boson. 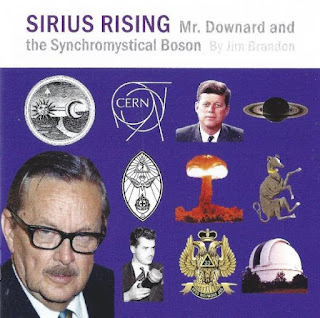 Renewed recognition of Sirius Rising was noted in recent years, and then reviewed on December 19, 2018, by Andrew W. Griffin of Red Dirt Report, in his critique, "Magick Bullet: 'Sirius Rising: Mr. Downard and the Synchromystical Boson' by Jim Brandon."

Griffin gives an overview of the entire contents of Siruis Rising tape, and there is no reason for me to repeat his words here. Griffin takes the reader along on the ride, and reminds us that Grimstad reinforces the definitions we are growing aware of ~ "Synchromysticism is the old study of 'name games' and 'Forteana,'" plus "All coincidences may have meaningful relationships." 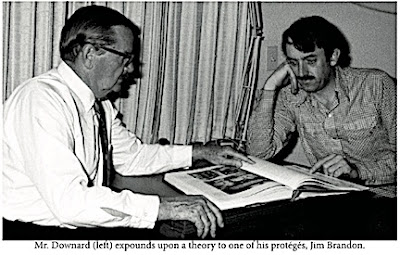 Grimstad's past has been published but only in the Internet era has it become more accessible.
One article quoted was from The Washington Post, May 31, 1978. Here are a few extracts:

A former editor for the American Nazi Party is registered with the Justice Department as an agent for the Saudi Arabian government and says he received $20,000 from the Saudis last June for an anti-Zionist book published two years ago.
William N. Grimstad says in registration papers filed Nov. 15 that he received the money as a "gift or honorarium apparently in appreciation" for his book, "Antizion." The book is a collection of anti-Zionist and anti-Jewish statements attributed to famous public figures throughout history ranging from Winston Churchill and Mark Twain to Napoleon and Cicero.
Grimstad was managing editor in the early 1970s of White Power, the bimonthly publication of the American Nazi Party, now the National Socialist White People's Party.
His book is dedicated to the late King Faisal of Saudi Arabia, described in the frontispiece as a "distinguished statemans and humanitarian who in this New Dark Age never lost insight into the hidden causes of world upheaval."
Several representatives of the Saudi embassy here, however, say they have never heard of Grimstad. They said they were unaware that he is officially registered as an agent for the Saudi government and know nothing of the $20,000 he claims he received.

"The embassy says it has had no contact with Mr. Grimstad," said Mark Helgeson of the Saudi Arabian Information Office.

Grimstad, reached by telephone at his home Geneva, N.Y., said he received the $20,000 unsolicited, by check last June. He said he registered as an agent of the Saudis five months later without notifying them, and that he registered as a legal precaution "because of receiving the money."

"The money came to me under very mysterious circumstances," he said. "I'm mystified by the whole thing."

He said in a letter after the telephone call that he now believes the money may have been planted by a "covert unit of Israeli Intelligence in a misguided effort to discredit the Saudis . . ." He said he came to this belief after receiving press inquiries triggred by disclosure of his Justice Department registration statement by the Anti-Defamation League, an element of the Jewish service organization B'nai B'dith that monitors anti-Jewish and anti-Zionist activities and individuals.

***
Grimstad's book, Antizion, was published in 1976 by Noontide Press, a California publishing house run by Willis A. Carto, a well-known anti-Zionist and treasurer of the ultra conservative Liberty Lobby here. The book quotes several hundred famous historical figures, many of whom said international Jewry is embarked on a conspiracy to dominate the world.

Posted by Loren Coleman at 12:15 PM No comments: