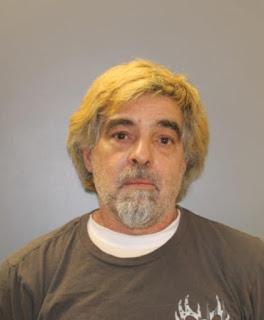 Chief Joel Dolan reports the Salem Police Department has arrested a New Jersey man following an investigation into an incident of vandalism at America’s Stonehenge.

MARK RUSSO, 50, OF SWEDESBORO, NEW JERSEY has been charged with one count of felony Criminal Mischief.

Salem Police Detectives arrested RUSSO on Monday (March 1, 2021) at the Salem County Correctional Facility in Woods Town, New Jersey, where he was being held pending extradition back to New Hampshire.

The arrest culminates an approximately 15 month long investigation into vandalism at the site of America’s Stonehenge at 105 Haverhill Road. According to a website for the attraction, America’s Stonehenge is believed to be more than 4,000 years old, and features various rock structures. Salem Police who responded to the scene on Sept. 29, 2019 following a report of criminal mischief came upon a rock tablet at the site that appeared to have been damaged by a power tool as well as knocked over. An 18 inch tall wooden cross was also found suspended between two trees, and attached to the cross were several photographs and hand drawn images.

“A job well done to Detective Geha, who has determinedly and skillfully worked on this case for well over a year,” Chief Dolan said. “This is an example of fine police work, and how law enforcement agencies, wherever they may be located, can work together to resolve investigations such as this one.”

We discussed here the vandalism that occurred at America's Stonehenge in North Salem, New Hampshire 18 months ago. 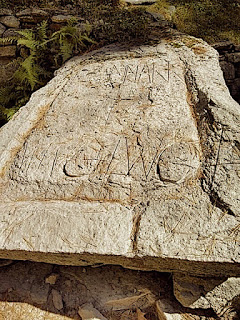 ....when news broke of vandalism at Salem, New Hampshire's America's Stonehenge, a site Lovecraft is rumored to have visited...A stone known as the Sacrificial Table was engraved by the vandal(s) with the messages, "AWG1WGA," an initialism of the QAnon slogan, "As we go one, we go all," and "I AM MARK." ...It would seem the individual or individuals behind this reprehensible act are simultaneously anti-globalist and anti-globe. Interestingly, QAnons refer to their opponents as "clowns." 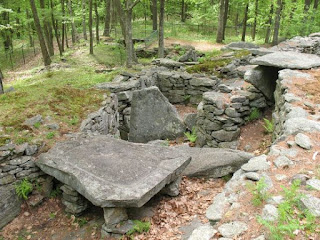 Additional details were added by this source:

Police said the rock tablet appeared to have been damaged by a power tool. It was carved with “WWG1WGA” and “IAMMARK." Police said the first stands for “Where We Go One, We Go All," a motto affiliated with the QAnon conspiracy theory.

An 18-inch (45-centimeter) tall wooden cross was found suspended between two trees, and attached to the cross were several photographs and hand-drawn images.

Police arrested Russo after finding images of the stone and Russo online and linking to him an “iammark" Twitter account with a reference to “a few improvements" made to the site. Images on the cross also were linked to Russo.

Bail was set at $3,000 cash for Russo, who is scheduled for a hearing on April 21. An email seeking comment from Russo's lawyer was sent Tuesday.

America’s Stonehenge, which features cave-like, granite enclosures, has drawn believers who say it’s 1,000 or more years old, and skeptics who say the evidence suggests it was the work of a 19th century shoemaker.

Several incidents of fires at Jewish sites and Masonic meeting locations temporally tied into the date of the America's Stonehenge vandalism.
Cory Panshin wrote in 2019...

The origin of the name "Russo" is French. The meaning of the name is "little red-haired one."
Russo as a boy's name is related to the Old French name Rousseau. The meaning of Russo is "little red-haired one."
From the Mystery Hill vandalism to the Capitol Insurrection, the links are growing clear.
h/t to Tim Binnall, Enki King, and Cory Panshin.
As well as to the covert law enforcement officers around the country investigating this and other forms of domestic terrorism.

Posted by Loren Coleman at 4:53 PM No comments: