All the warning signs are pointing to a possible series of school shootings from March 20th through April 20th. I hope not, but every indication is that the media is entering its first post-9/11 "shooting rampage" feeding frenzy, and as March nears its end, and into April, "school shootings" could be next.

I base this from an analysis of how the Werther (copycat) effect from other events (mall shootings, murder-suicides, courthouse shootings) spill over into school shootings, and the anniversary reality of the calendar. In my book, The Copycat Effect (NY: Simon and Schuster, 2004), I point out the youthful suicidal "school shooting" subculture uses the neo-Nazi calendar as a temporal roadmap. Columbine's and Erfurt, Germany's school shootings are the two most obvious examples.

[This is a reconstructed posting, due to it being deleted by accident.]

The above warning of March 18, 2005, was followed by the Red Lake event: Neo-Nazi/Native Jeff Weise, a 16-year-old student at Red Lake High School, killed nine people and then himself in the town of Red Lake, Minnesota, on Monday, March 21, 2005. 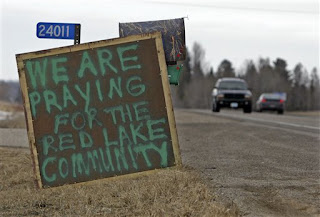