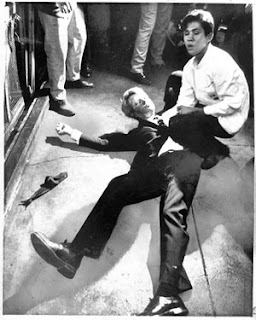 Bobby is a 2006 motion picture written and directed by Emilio Estevez. The film is a fictional account of the lives of several people during the final hours in the life of the late Senator Robert F. Kennedy (RFK), an active candidate for President of the United States, at the time of his assassination. RFK won the California primary that occurred on June 4, was shot in the early morning hours of June 5, and died on June 6, 1968.

The movie Bobby was set for release on November 17, 2006, but apparently the general release date is now Thanksgiving Day 2006.

What few have pointed out is the importance of the date of RFK's assassination. As I detail in my 2004 book, the date has twilight connotations.

On June 5, 1968, Sirhan Bishara Sirhan, 24, who is generally described in quick historical overviews as a "Jordanian Arab," shot RFK in the Hotel Ambassador in Los Angeles. RFK died the following day, but the actual day he was shot – and this is a significant fact overlooked time and time again - was the first anniversary of the first day of the Six-Day War between Israel and its Arab neighbors that began on June 5, 1967 (or as Charles Bishara Bishop, the young man who flew into the Tampa bank building on January 5, 2002, labeled it in his suicide note as "the 1967 Israeli-Syrian war").

Sirhan Sirhan's shooting down of a successful presidential candidate is often characterized as one of the first acts of Palestine or Arab terrorism to take place on American soil, with 9/11 being the most recent example. Sirhan Bishara Sirhan saw himself as a Palestinian militant.

Sirhan and his family had been uprooted from their home in Jordan by the Arab-Israeli war in 1948, and prosecutors at his trial claimed Sirhan, who was a Christian Arab, was vehemently anti-Israel. Charles Bishara Bishop, whose suicide note clearly indicated he was a student of the 1967 Israeli-Arab conflict, may have also read what another Bishara, as America's first Palestinian assassin, had done because of it.

I don't expect to find anything about the Six-Day War in the new movie, Bobby, but at least now you know.
Posted by Loren Coleman at 1:23 AM