There is something sinister happening in Fayetteville, North Carolina. Women soldiers are being killed. Young women are being stalked. There is a copycat about.

In that town's Fairfield Inn, in the room where Spc. Megan Lynn Touma’s body was discovered June 21, 2008, a killer watched.

He went purposefully about his killing in that North Carolina hotel room, and then scrawled the "Zodiac Symbol," like that of the infamous Zodiac Killer, upon the room's mirror, according to local police.

He is calling himself, by his actions and his symbol, Zodiac.

The sign he used to inscribe the letter he sent to the press reminds us, of course, of the Zodiac of the 1960s.

The choice of the date, the Summer Solstice, may be part of his plan for attention.

Perhaps even the location, Fayetteville, was picked on purpose. The name game. The copycat effect. You've read of both of them here.

Below is the note. More later. 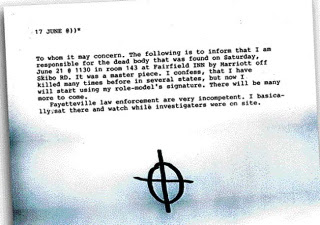 Posted by Loren Coleman at 5:43 PM

Thanks for the info and look forward to any follow-up's to this story.

Your Lafayette insights were quite eye opening to me in previous posts.

Considering I was born in Fayetteville, NC back in '69 I am curious as to what is afoot here...as I am sure you are familiar with the "Fatal Vision" killings (Jeffrey MacDonald). '70