In the wake of the University of Washington self-immolation, another university-related suicide by fire has occurred on the other side of the country on Halloween. (Also, there is an update on the identity of the UW victim.)

Is there some key to understanding these deaths, based on their dates?

On November 2, 1965, Norman Morrison of Baltimore set himself afire outside the Pentagon office of the Secretary of Defense, Robert McNamara, in direct protest to the Vietnam War. Norman was the executive secretary of a Quaker community in Baltimore, and, according to his wife, appeared to decide on his act after reading an article by a South Vietnamese priest about the bombing of a village there.

A week after Norman Morrison's death, on November 9, 1965, another American Roger A. LaPorte, 21, a member of the Catholic Worker movement, died in a self-immolation protest. Norman sat down in front of the Dag Hammarskjold Library at the United Nations in New York, calmly composed himself in the position of the Buddhist monks who had immolated themselves in Vietnam earlier, doused himself with gasoline, and set himself aflame.

La Porte died the next day from second- and third-degree burns covering 95 percent of his body. Despite his burns, he remained conscious, lucid, clearly able to speak. When asked why he had burned himself, La Porte calmly replied, "I'm a Catholic Worker. I'm against war, all wars. I did this as a religious action." (Credit to cvllelaw of Democratic Central for reawakening me to the anniversaries of these events, detailed in The Copycat Effect. The timing seems more than coincidence but then again, perhaps it only is a temporal accident.) 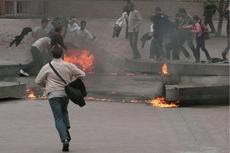 Nevertheless, we appear to be going into a new cycle, if even only, hopefully, a short one.

Some new details about the 61-year-old man who died by fire (pictured above) in Red Square at the University of Washington (UW) in Seattle on October 30, 2008, have emerged.

The King County medical examiner's office has identified the 61-year-old man who set himself on fire at the University of Washington campus last Thursday as Nin Soo Chun.

The medical examiner ruled Chun's death a suicide Monday, four days after the former UW worker poured gasoline on himself and set himself ablaze in Red Square during the middle of the day.

Chun died after shortly after being brought to Harborview Medical Center with second- and third-degree burns.

The man had worked for UW Facilities Services for some time, said UW spokesman Norm Arkans. His employment ended in late August, 2008, Arkans said, following a process to release him.

"At the very end, he had stopped coming to work, so a process was initiated to separate him from the university," Arkans said.

Chun had worked as a custodian for the UW's Facilities Services as a custodian from December 2005 to early summer this year. He emigrated to the U.S. from Korea in 1977 and became a naturalized citizen in 1982.

After several "confrontational, but not necessarily physical" altercations with co-workers in June, Chun was reassigned from his usual work site in Padelford Hall.

Soon after these incidents, which Arkans said were enough to make his co-workers "uncomfortable," Chun requested and was granted several weeks' vacation, after which he did not return to work.

The UW tried, unsuccessfully, to contact him throughout the summer. On Aug. 25, when he came to campus to collect his paycheck, he was told he was being fired, and that he had 10 days to seek reinstatement. The UW offered Chun counseling assistance but he did not accept it, Arkans said.

Chun instead filed an unemployment claim with the state, which was denied. Chun appealed the denial at an Oct. 24 hearing, Arkans said.

"The man was clearly a troubled individual, and I think everyone who's encountered this wants to be respectful" of the circumstances surrounding Chun's death, Arkans said. Until the incidents at the beginning of the summer, Chun had been a good employee, Arkans said.


Meanwhile, the day after the self-immolation in Seattle, another university-related suicide by fire occurred in New York State.

A body found burned beyond recognition in a western New York cemetery on Halloween night (October 31, 2008) is believed to be that of a college student who took his own life.

University of Rochester, Rochester, NY, officials sent an e-mail to faculty and students sent early Saturday, November 1, 2008, telling them that while authorities have yet to identify the victim or a cause of death, the apparent self-immolation appears to have been a suicide.

Rochester Police Capt. Lloyd Cuyler says officers responded the historic Mt. Hope Cemetery _ which is adjacent to the campus _ at around 11:50 p.m. Friday, October 31, after receiving a report of a person on fire.

He says they found the scorched male body in a remote section of the cemetery next to a gasoline can and a book bag.
The copycat and behavior contagion nature of self-immolations is well-documented.

Political self-immolations in our media-conscious world, historically began in Vietnam in 1963.

Journalist Malcolm Browne took photographs (below) of Thích Quảng Ðức during his self-immolation. These photographs were so widely disseminated, they became one of the lasting images of the early days of the Vietnam War. Browne won many awards for his photographs of the immolation, including the World Press Photo of the Year (1963) and the Pulitzer Prize for International Reporting (1964).

After Thích Quảng Ðức's death, his body was re-cremated, but his heart remained intact. The heart did not burn. It was considered to be holy and placed in a glass chalice at Xa Loi Pagoda. The intact heart relic is regarded as a symbol of compassion and Thích Quảng Đức has subsequently been revered by Vietnamese Buddhists as a bodhisattva (Bồ Tát) - an enlightened, heroic wisdom-being - and accordingly is often referred to in Vietnamese as Bồ Tát Thích Quảng Đức. This is a Jon Haddock painting that recreates the Thích Quảng Ðức self-immolation based on Malcolm Browne's photographs. 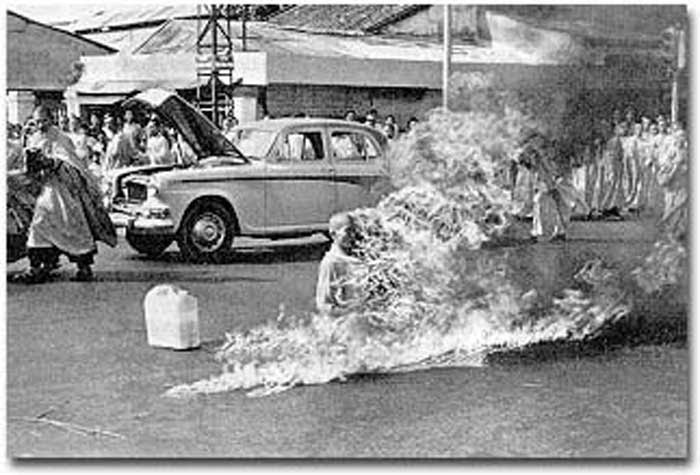 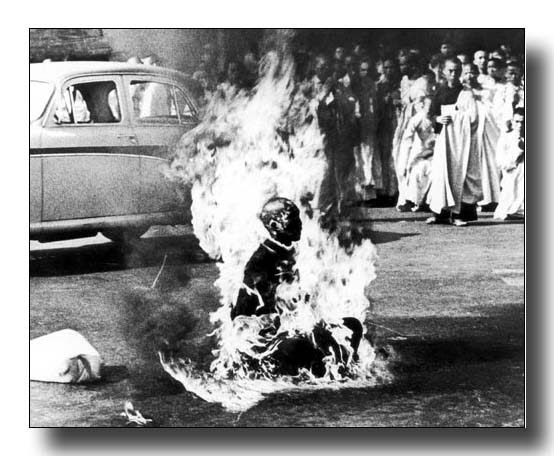 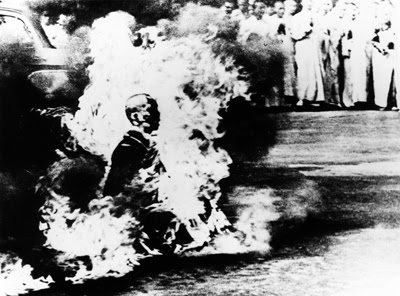 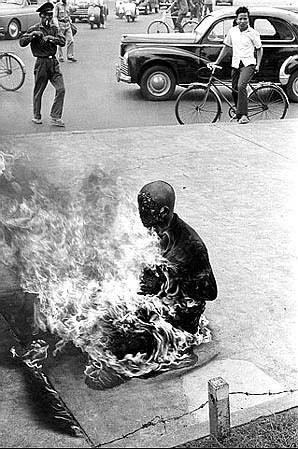 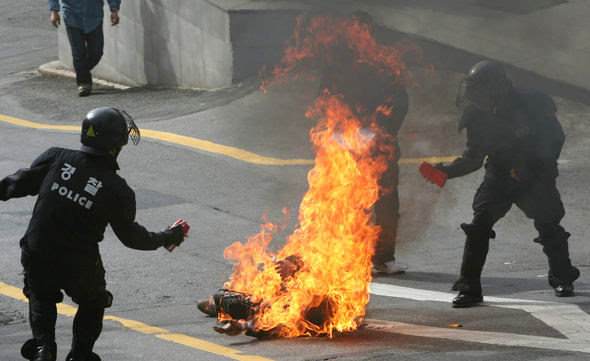 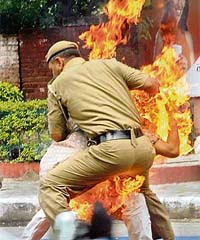 I really can't think of anything more hardcore...I sure hope this particular "effect" doesn't last long either.

The dates must certainly be significant. Odd that neither of the recent one's appear to have been any major political protest however.

A little too odd that none have been political protests given the history of all other self immolations.

Possibly they were but the authorities are not reporting that part so they don't give any credence to the protesters action and out of fear of more copycats?

Wouldn't be very hard to cover up something as simple as a note left behind explaining the self immolation, and I could easily see the benefits to law enforcement of covering it up.