Images of the Week

Associated Press photographer Cliff Owen captured some striking images from the scene of the news conference about J. Patrick Bedell's shooting at the Pentagon.

These are my editorial choices for the photographs of the week, which summarize the subtle twilight background to the "active shooter" period currently being experienced in the USA: 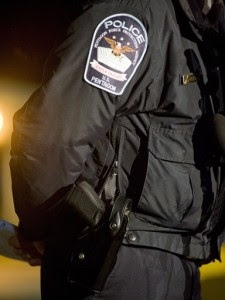 Pentagon Police Chief Richard Keevill wears his Glock .40 S&W pistol as he speaks with reporters about a shooting at the Pentagon in Washington, Thursday, March 4, 2010. (AP Photo/Cliff Owen) 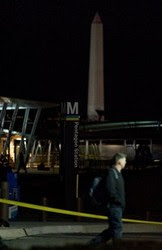 A pedestrian passes near the Pentagon Metro complex where a man with a gun opened fire in Washington, Thursday, March 4, 2010. (AP Photo/Cliff Owen)

The object visible in the distance, of course, is the Washington Masonic Monument obelisk.
Posted by Loren Coleman at 8:24 AM

You really have remarkable areas of interest ..including these events ..As a former LEO and CSI Investigator..I share your many interests..including UFO's..and the fact I was driving a person through Grays Harbor, County washington when they saw a sasquatch species..in great Detail beside the road...The large Sasquatch statue you stand in front of is very close in detail to the real thing according to my witness..The face is a little different..

I wonder what you think of the Influence of music on Juveniles and young people and criminal Behaviour..??