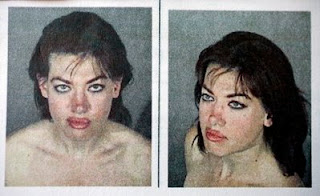 The following incident occurred in West Hollywood, California, on Monday, May 3, 2010.

Has the copycat effect of the Chinese knife attacks jumped the Pacific?

"There is no witness protection program!"

There are several things to note about this new event. The alleged attacker vaguely sounds like she was in the typical type of Sirhan Sirhan trance noted for some assailants.

Other mysteries abound. Where is this woman's shirt, in her mug photos, at top? What does her makeup and appearance suggest that has not been mentioned?

A woman who stabbed and wounded four people in a busy Target store Monday afternoon [May 3, 2010] was arrested when an off-duty sheriff's deputy pulled his gun and ordered the woman to the ground as screaming shoppers ran from the building, authorities said.

Layla Trawick used a butcher's knife and a carving knife to attack the victims, using both blades at the same time — one in each hand, like in the movie "Psycho," sheriff's spokesman Steve Whitmore said

"She was literally walking up and down the aisles slashing people," he said.

A mother holding her baby was stabbed in the neck and was taken to the hospital, where she was in stable condition, Whitmore said. The baby was unhurt and all four victims were expected to survive.

One witness said she was shopping for a Mother's Day card when she heard someone screaming, "There is no witness protection program!" as chaos broke out in the store.

"I don't know what it means but she was yelling that repeatedly and at the top of her lungs," said Katy Winn, a freelance photographer from West Hollywood. "I think I heard (the deputy) telling her to drop to the floor. That's when things got really chaotic and started falling over."

Winn said she dropped her basket and dashed across the store to the women's section, where she hid behind the clothing racks.

"From the moment the screaming started it was about five minutes. But it felt longer than that," she said.

Los Angeles County Sheriff's Deputy Clay Grant Jr., said he was picking up paper towels and other items when people around him started running and screaming.

Grant, 26, grabbed his duty weapon, identified himself as a sheriff's deputy and ordered the woman to drop the knives, he said. She ran away and he followed her from aisle to aisle.

Grant was wearing a white T-shirt, camouflage shorts and running shoes so several shoppers mistook him for a gunman, adding to the sense of panic, sheriff's Sgt. Josh Mankini said.

Grant followed Trawick from aisle to aisle, until she turned and waved the knives at him from above her head, he said.

But he decided not to shoot because he didn't feel his life was in jeopardy, he said. For a second time, he ordered her to drop the knives and finally she complied.

"I was more concerned about the knife, more than what she was saying," Grant said. "Her facial expression was someone who was lost, confused, didn't know exactly where they were."

Trawick was arrested with the help of private security guards and held on $1 million bail on suspicion of attempted murder. Investigators were trying to determine whether the 34-year-old Antioch woman got the knives in the store.

Speaking to reporters at a sheriff's station later, Grant was modest.

"If he wasn't there, who knows? Someone would be dead right now," Mankini said. "He had no communication with outside law enforcement. He's just some guy doing his shopping. We're pretty proud of him."

Mankini said Grant, a five-year veteran of the department, was authorized to have a weapon in the store.

The above story was carried by Yahoo News. 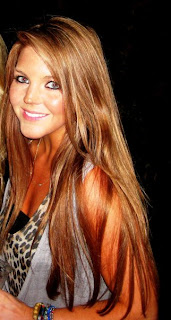 In another detail from the LA Times, comes this:

Entertainment journalist Allison McNamara was shopping at the store when she encountered a screaming woman in the aisle that separates the skin care and kitchen sections.

Our thanks to SMiles Lewis for the newstips.
Posted by Loren Coleman at 10:12 AM

If we play the name game...Jason Trawick is a talent agent with clients like Britney Spears and Paris Hilton, who could be considered professional clowns.

That picture of her is intense in a sort of unsettling way when added to the knowledge of what happened.

Ms. Trawick was wearing a tube top when she was arrested, which may account for her bare shoulders.

"She thinks that there's a bug in her ear, like a microphone and a camera in her eye. That she's sent on these missions from the government," said Trawick's mother. "So she thinks she should be in the witness protection program and she's not."


Also, there was another apparently random stabbing attack on a bus driver in the city of Rialto, 80 miles west of the Target store attack, with another mentally ill person being blamed.
See fontanaheraldnews.com

Actually, this witness says Trawick repeated: "I'm NOT bipolar. There is no witness protection program." (at 45 sec. mark)

Quite clearly, we see the news media is massaging the message in a particular direction. Why?