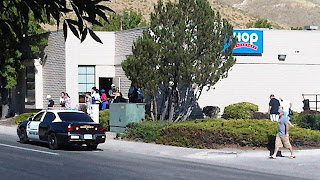 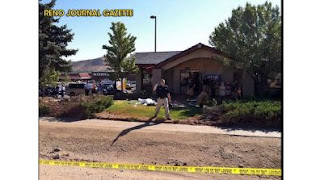 This is another view of the same IHOP restaurant in Carson City, Nevada, where multiple people were shot. Photo: Reno Journal Gazette. 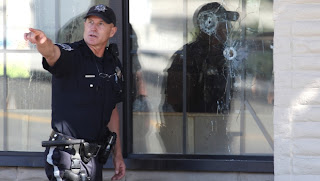 With bullet holes seen in a window, officers look for evidence at the scene of a shooting at an IHOP restaurant in Carson City, Nevada. Photo: Cathleen Allison.

Three people are dead after a gunman opened fire at a Nevada IHOP restaurant Tuesday morning, wounding himself and nine other people.
The shooting happened at about 9 a.m. local time at the Carson City restaurant, located in a strip mall on the state capital's main street.
At least two of the three people killed were National Guardsmen in uniform.
++++++
UPDATE September 7th
A third National Guard member, an as yet unidentified woman, has died from injuries suffered in a shooting rampage that took place at a Nevada IHOP restaurant, according to the Carson City, Nevada sheriff. The shooting spree has now left five people dead, including the shooter, and left seven wounded.
++++++
It wasn't immediately clear whether the gunman had any connection with the military or the guard, said Nevada National Guard Sgt. Mike Getten. He said guard members were meeting at the restaurant.
Witnesses said a man pulled up in a blue minivan around 9 a.m. at the IHOP restaurant in a strip mall on Carson City's main street. He shot a man on a motorcycle, then walked inside the restaurant and started shooting, said Ralph Swagler, owner of Locals Barbecue in the same strip mall as the IHOP.
Swagler told the Reno Journal Gazette that after several minutes, the man walked outside and began firing into the Locals Barbecue and an H&R Block in the strip mall.
Law enforcement officers responded but fired no shots during the ordeal.

One victim died at a hospital in Carson City. Seven additional victims are now being treated at area hospitals, authorities said.


A man with an AK-47 assault rifle shot an entire group of five uniformed National Guard members eating breakfast at a Nevada IHOP, killing two of them and a woman nearby in a hail of gunfire.
The suspect, 32-year-old Eduardo Sencion of Carson City, also shot himself and later died at a hospital.
Local and state police and FBI agents descended on the scene on South Carson Street, also called U.S. 395. Yellow tape surrounded the parking lot near a Kohl's department store in a shopping complex across the street from a casino and hotel.


The area formerly known as Eagle Valley was "discovered" by John C. Fremont (who would later be a presidential candidate of the Radical Republicans in 1864) and his exploration party in January 1843. Fremont named the river flowing through the valley Carson River in honor of Christopher "Kit" Carson, the mountain man and scout he had hired for his expedition.
Carson City is the capital of Nevada and it is the source of a long history. For example, Carson Lodge # 1 has the distinction of being the first Freemason's lodge in the State of Nevada.  Its first records date back to early 1862 (when Nevada was still a Territory).  Samuel Clemens (Mark Twain) visited this Lodge during the time when he was in Carson City.
IHOPs have been the site of previous shootings. 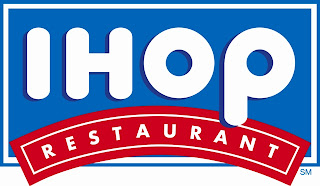