Peter Park sends along the following:

One curious twilight-language coincidence I myself have long noticed but which I've never to my recollection seen in accounts of the 1955 Sutton farmhouse alien siege is the fact that Hopkinsville, KY, was the birthplace and home town of famous psychic and "sleeping prophet" Edgar Cayce. I've long been a little surprised that Christian fundamentalists who see anything "occult," "New Age," or "psychic" as "of the Devil" haven't picked up on the Sutton case, with its decidedly demonic-looking "goblins," as just some of Edgar Cayce's buddies paying a rerturn visit to his home town!

Several twilight insights can be said about this. 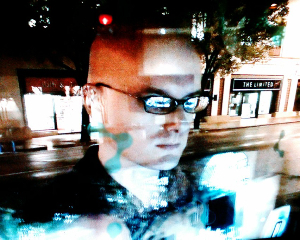 First off, in January 2008, Mac Tonnies (pictured above) looked at the Hopkinsville + hobgoblin 1955 invasion + Edgar Cayce "name game" link, here.
(Mac Tonnies was found dead on October 22, 2009, the same day that American comedian and television personality Soupy Sales died. October 22, 362 is remembered for a mysterious fire that destroyed the Temple of Apollo at Daphne outside Antioch.) 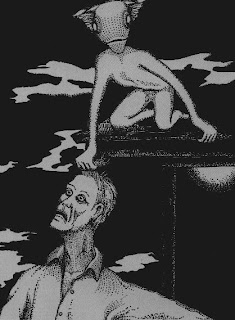 One of the 1955 creatures attacks. Illustration from Mysterious America.
The time period of the Kentucky sightings occurred between 8:00 p.m. and 4:45 a.m Central Time. This "attack" occurred on, please note this date, August 21, 1955, through the morning of August 22nd. Tonnies also mentioned Budd Hopkins in conjunction with the Hopkinsville event.  The name game is a natural with Hopkinsville and Budd's last name. 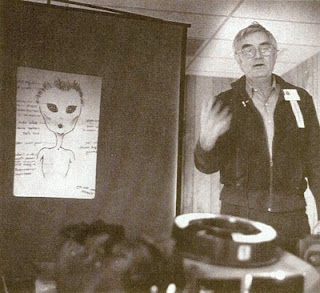 Tonnies wrote at his blog: "Skeptics will point out that 'Hopkins' is hardly an unusual name. But there are enough cases of synchronicity within UFO research alone to justify a closer, more rigorous analysis. Perhaps Fortean events unfold in a barely glimpsed 'Matrix,' their manifestations only partially perceptible to baseline human consciousness." 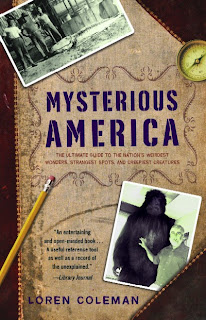 In my book Mysterious America: The Ultimate Guide to the Nation's Weirdest Wonders, Strangest Spots, and Creepiest Creatures, I dealt with the 1955 events, the name game (like Lafayette = “the little fairy” or “the little enchantment”), the devil meaning behind "hob" and "hobgoblins," and my further interest in links to dates.
William Mott, rephrasing and extending my notes, shared the following at Mac's blog,

"Hob" is an ancient appellation for a demon, goblin, or devil. The stretch to "Hobkin" or "Hopkin," i.e., "goblinkind" or "devilkind," is another connection in all this. Hobyahs, hobgoblins, etc. bear this out.

We have here a Fortean case of names and dates colliding across time and space.
Budd Hopkins died on, get this, August 21, 2011, at 1:35 p.m. ET.
What gives with August 21st? Hopkinsville hobgoblins in 1955 and Budd Hopkins' death in 2011.
Dipping into the events of August 21st, I find these quick examples:  In 1945, on August 21st, physicist Harry K. Daghlian, Jr. is fatally irradiated in a criticality incident during an experiment with the Demon core at the Los Alamos National Laboratory, near the 33 degree north latitude. In 1968, Soviet Union-dominated Warsaw Pact troops invade Czechoslovakia. In 1971, Black Panther George Jackson was killed (some say "assassinated") in a shootout with police at the Marin County Courthouse, the last commissioned building designed by Frank Lloyd Wright. In 1983, Philippine opposition leader Benigno Aquino, Jr. is assassinated at the Manila International Airport. 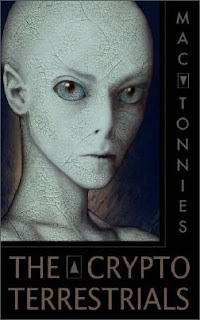 For more on Tonnies's ideas, see his book, The Cryptoterrestrials: A Meditation on Indigenous Humanoids and Aliens Among Us (NY: Anomalist Books, 2010), which was published soon after his death.
I have to point out that the "Hopkinsville invasion" actually took place in Kelly, Kentucky, located 8 miles north of Hopkinsville, and Cayce was born 10 miles away, in Beverly, south of Hopkinsville, straight down Lafayette Road.
Nevertheless, Cayce is most often said to have been born in "Hopkinsville," and the "little silver hobgoblins" were remembered as having attacked in "Hopkinsville," because of the 1955 newspaper and Air Force accounts associating that town with those events.
Meanwhile, Happy Winter Solstice everyone. In Hopkinsville, Kentucky, this year, that's December 21st. In 2011, the December solstice takes place on Wednesday, December 21 at 11:30 p.m. CST (Thursday, December 22 at 5:30 UTC).
Posted by Loren Coleman at 11:24 AM

Kelly:
Edward Kelly (1555 – 1597) was an alchemist, spirit medium and John Dee’s scryer. Together the communicated with ‘angels’and through their efforts which Dee recorded, we have what is known as ‘the Enochian language’. Aleister Crowley stated he was Kelly’s reincarnation.

Sutton:
Anthony Sutton is the author of America’s Secret Establishment on the Order of Skull & Bones.

Wetzel:
In Fortean Times 283, my Forum article (What’s with Wetzels?) I treat another Wetzel preceding the two Charlies, who also had a strange encounter with a monster.

The Sutton's did have a terrible experience, but what, we don't know for sure.

The number and name oddities might relate to our world being a simulation of some kind- patterns repeat and link up, due to a programming consistency. If we can learn how to read the 'signs' of the script, maybe we can walk into the woods and wait to see a Sasquatch, and one will then walk past you, since you divined the future, so to speak. The creator gives us clues and puzzles, and sends us phantoms, maybe just for entertainment purposes.

A very nice roundup - tho a bit topsy-turvy, as the Hopkinsville goblin attack would serve to argue against both Mr. Tonnies' and Mr. Hopkins' favored theories. The beings were neither significantly humanoid or greys who kidnapped people for hybrid experiments - that should tell us something about the phenomenon right there!

I was an avid flying saucer and all things weird buff since a young girl, however i didn't marry until i was 37. My husband's birthday is Sept. 19, often cited as the date of the Betty and Barney Hill abduction. We live one town over from Lafayette, in a town called Pleasant Hill (fairies, 'the good neighbors', are often associated with mounds or hills). steph

You stated that the Hobgoblin event took place on Aug 21st and into the morning of Aug 22nd.

Aug 22nd is my birthday, and I did the illustrations fro Mac Tonnies' final book.

Hopkinsville, KY will be the point of greatest eclipse in August 21, 2017. Tourism expected to increase in the area.