On November 14, 2015, I was given the Lifetime Achievement in Cryptozoology Award by 2015 PA MUFON, bestowed by the Pennsylvania State Director John Ventre. I was shocked and surprised it was the False Maria from Metropolis, a personal favorite of mine, a fact unknown to these PA folks. Indeed, my wife Jenny had done a painting of Metropolis's robotic wonder for me, months ago. 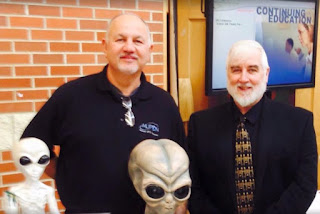 Ventre (here with his alien partners in crime) made it an adventure by dropping the award twice, as he walked into the college to present it to me. The legs, arms, a hand, and head broke off. Indeed, the statuette was decapitated. 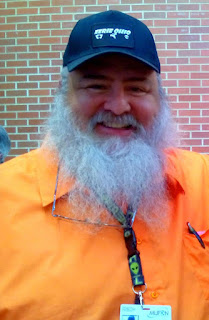 The head went missing for hours. Search parties were assembled, but it could not be found. Then, Erie Ohio's Thomas Lee Curtin Jr. (above) presented me with the head he had found in the brush outside the lecture hall. The day - or at least, the head - was saved, and now to put False Maria back together. 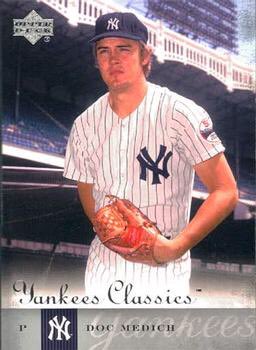 What was I to do? Ventre declared he was not going to touch it again. Luckily, former Yankees' and other MLB teams' pitcher, MUFON insider George "Doc" Medich came to the rescue with super glue. I glued the statute temporarily, and the reconstruction allowed the ceremony to proceed. (The entire body broke away from the base, on the flight home, due to rough baggage handling, apparently, and another repair is in order).

But the Award was in hand, and I am honored by it. 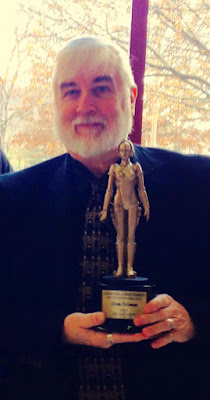 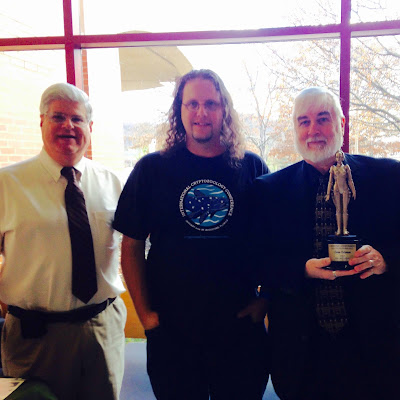 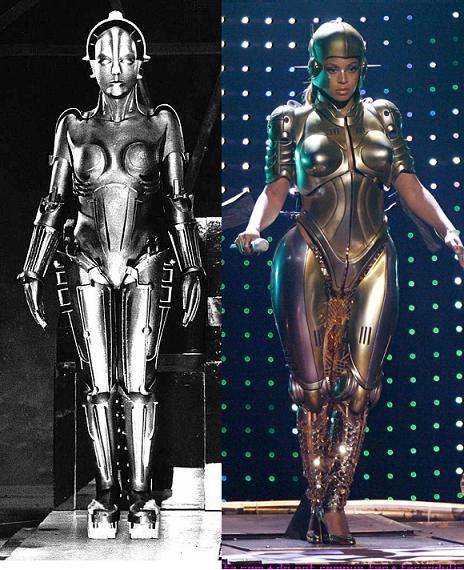 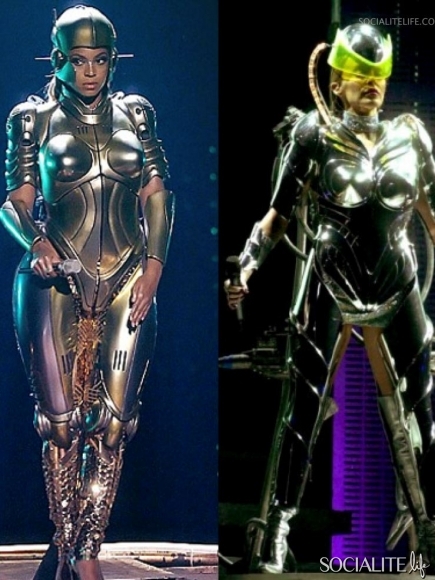 The Maschinenmensch (German for "machine-human") is a fictional character in Fritz Lang's film Metropolis, played by German actress Brigitte Helm in both its robot form and human incarnation. She is a gynoid (female robot or android) created by the scientist Rotwang. Named Maria in the film, and Futura in Thea von Harbou's original novel Metropolis, she was the first robot ever depicted in cinema.
The Maschinenmensch has been given several names through the decades: Parody, Ultima, Machina, Futura, Robotrix, False Maria, Robot Maria, Roboria and Hel. The intertitles of the 2010 restoration of Metropolis quotes Rotwang, the robot's creator, referring to his gynoid Maschinenmensch, literally translated as "Machine human." Source.

This all happened in the weird neverland of Youngwood, Pennsylvania, as world events swirled around a weekend dominated by Friday the 13th of November 2015's Paris Terror Attack. There was more talk of Fayettenam than Paris, as it turned out. That seemed rather bizarre.

Congratulations on your award, Loren!

They certainly don't make films like Metropolis anymore. Or filmmakers like Fritz Lang. So it is appropriate since they also do not make cryptozoologists/cryptoculturologists like you anymore either

But in the end, how could even a person as accomplished as you, solve a problem like Maria?

Congratulations! Both you and MUFON have set examples of rational open mindedness. Very inspiring. After reading your post I watched Metropolis. What an amazing film on so many levels!