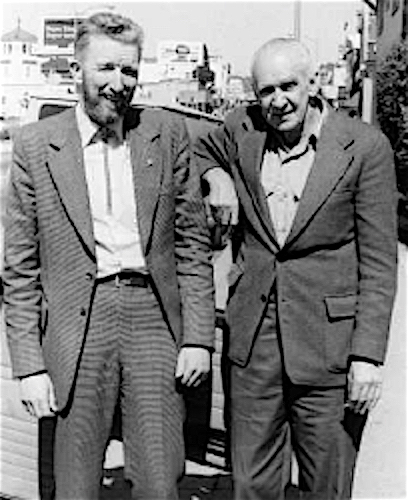 The Bigfoot community is in mourning early in June 2016, with the news that the "World’s Leading Sasquatch Researcher and Chronicler John Green Has Died (1927 – 2016)."

Coincidentally, the date that John Green died, May 28, 2016, also happened to be the birthday of Tom Yamarone, the Bigfoot songster (born May 28, 1961, Port Chester, NY, at 4:15 a.m.). In a remarkable instance of bizarre foreshadowing, five year ago, Yamarone told on his blog of starting off the Yakima Bigfoot Round-Up with his new song, John Green. The date he decided to recall this - May 28, 2011. 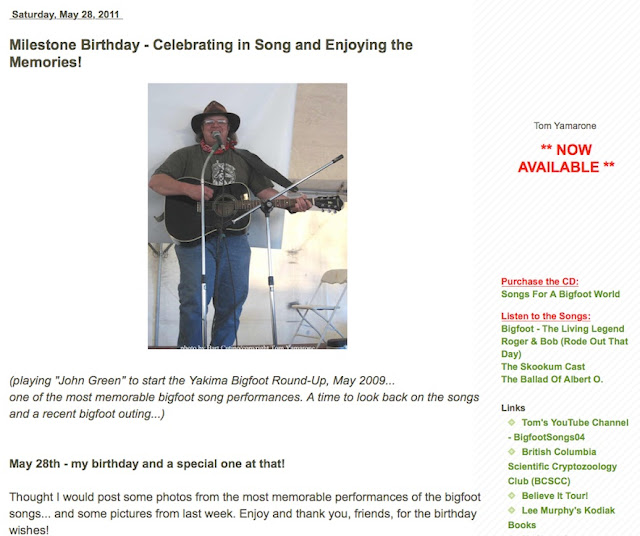 Have there been special Sasquatch events occurring at this time of year?

Historically, we do know late May was significant in British Columbia, regarding Sasquatch and the Native Peoples. Indian Agent J. W. Burns (who coined the term "Sasquatch") recorded how the local First Nations people felt their Forest Giants were very real, during the May 23, 1938 celebration of a festival known as “Indian Sasquatch Days,” held at Harrison Hot Springs, British Columbia. Harrison Hot Springs was where John Green called home, and was later elected mayor there.

Tom Yarmarone points out that, "The most significant Bigfoot/Sasquatch event on May 28th was the Sasquatch Research Conference in Bellingham, Washington,” in 2005.

It was Yarmorone's first trip to a conference with Bob Gimlin - along with Scott McClean, Cliff Barackman and James "Bobo" Fay. He performed three Bigfoot songs that day and had a birthday lunch with the above mentioned friends and Thom Powell and Tom Cousino. I, Loren Coleman, was also there and that was the first meeting we had, and the same for Tom and John Kirk, Ron Morehead and Al Berry. In attendance was Jeff Meldrum, John Bindernagel, M.K. Davis, and Autumn Williams. 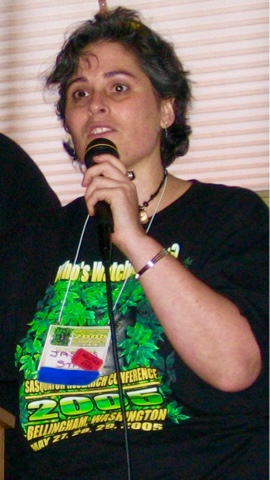 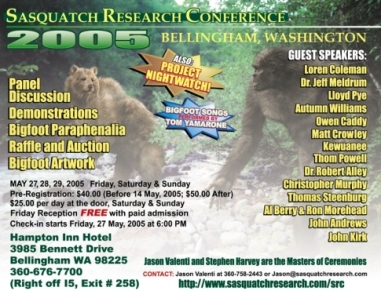 Jason Valenti and Star Sams had organized the Sasquatch Research Conference held at Bellingham, Washington, on May 27-29, 2005. The event was successfully hosted by Jason Valenti and Star Sams (pictured), along with assistance from Paul Smith and others. I was happy to be one of their guests and speak at the gathering. Sadly, the terrible news reached the Bigfoot community the next year that Jason’s partner, Star, was killed in a tragic car crash on August 15, 2006.

Woman dies in crash on Chuckanut

A Bellingham woman died Wednesday evening when her car plunged off the side of Chuckanut Drive, according to the Washington State Patrol.
Star C. Sams, 37, was driving her sport utility vehicle south on Chuckanut near the Whatcom County line with Skagit County about 7:30 p.m.
Near the Clayton Beach trailhead, where the road curves to the left, her vehicle didn’t make the turn.
Instead it went right, traveling off the road and down the cliff, according to the State Patrol.
Rescuers made their way to the car but found Sams already dead. No one else was in the vehicle.

Now John Green is gone. His legacy lives on. And he leaves much to ponder in the research he did. One thing he seems to have proven: There is no Bigfoot curse. Nevertheless, Green was squarely in the middle of revealing that this "Sasquatch hex" actually existed. That is the "curse" was part of the folklore discussed, and Green was the one who seems to have first chronicled it for the English-reading world.


For others that might be translated into "to study Bigfoot is to die."
This early consideration grew out of one often-told story by John Green (who was born February 12, 1927).  Writing about the Ruby Creek incident of 1941, Green, who was the first to chronicle it, mentioned that for “an Indian to see a Sasquatch was believed to be bad luck, in fact the observer was in danger of dying."
Then Ivan Sanderson propelled the “if you see a Bigfoot you die” legend into the lore of the field with a short passage in his 1961 book, Abominable Snowmen: Legend Come to Life. Therein, Sanderson referred to the primary witnesses in the Ruby Creek incident, the Chapmans: “It is just as well that we crossed the Fraser River just when we did, and so met the Chapmans, because about a month afterward they were drowned crossing at the same spot late one night. The irony and tragedy of this event upset me greatly.... The Chapman family at the time of the incident consisted of George and Jeanne Chapman and three children.”

In early 2002, a rumor spread on the Internet that “Roger Patterson died not long after his encounter” of October 20, 1967. Or those that were involved with the 2001 Skookum cast might be star-crossed, after the deaths of Dr. LeRoy Fisher and Dr. Grover Krantz.
Is there any reality to this sense of bad luck, death, seeing or even studying Bigfoot? The Patterson-Gimlin film footage was taken in October 1967; Roger Patterson died in January 1972. The Skookum cast was found in 2000, and Fisher and Krantz died in 2002. The Chapmans had their sighting in 1941 and died in 1959--about 18 years later - although the point Sanderson was making is that relatively soon after he interviewed them they died. The folklore lives on.
Writing in Salon in 2001, former Bigfoot researcher Kyle Mizokami wrote:

“In my time investigating the hairy linebacker, I expended most of my efforts researching Native American legends about the creature. Many tribes believed in a Bigfoot-type being, and many agreed that to see Bigfoot was a bad sign. Often, someone who actually witnessed Bigfoot would have a run of bad luck, go insane, grow sick or even die. I have always believed that these legends, no matter how fantastic they sounded, had some grains of truth to them. However, the belief of bad luck associated with Bigfoot, while consistent across multiple tribes, was a little too out there, a little too metaphysical for my liking. I wanted facts, not superstition. I didn't know what to do with the bad luck aspect of the legend, so I ignored and eventually forgot about it. Bad idea. Ironically, by ignoring the bad luck theme I had ignored perhaps the most personally relevant ‘fact’ about Bigfoot of all. All that talk of ‘seeing’ Bigfoot (figuratively or otherwise) as being a bad luck sign turned out to be true. It's the scarlet B in action, viewed through the lenses of another culture. It's dozens of ancient cultures collectively sending the warning: ‘Hey, don't get involved with Bigfoot. You will so regret it.’ The warnings were in plain view -- and I completely missed them.”

People die. It is part of the human condition. In actuality, there is no "Sasquatch death curse." There is only sadness that we have no control of when death occurs. And that someone has moved on.

John Green got involved in serious Sasquatch research in 1956. He died 60 years later. The "Bigfoot curse" never touched him, except in a positive fashion.

Posted by Loren Coleman at 1:35 PM