To place the breaking news of today's school stabbing in context, I have created a summary list of recent Japanese and Chinese stabbings. A significant cluster occurred in China during the last half of 2004. 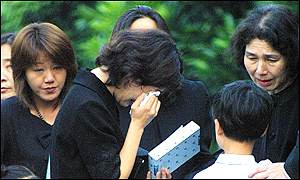 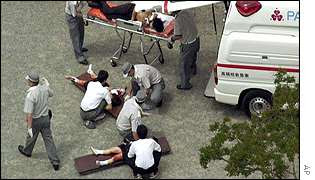 August 4, 2004 ~ Beijing, China
1 dead, 17 injured ~ Xu Heping, a 51-year-old doorman with a history of mental illness, stabbed several students and teachers in Beijing University's Number One Hospital, killing a child and wounding 17 others, 14 of whom were children.

September, 2004 ~ Suzhou, People's Republic of China
28 injured ~ A man armed with a knife and homemade explosives attacked 28 children at a daycare center/kindergarten.

October, 2004 ~ Beijing, China
2 dead ~ A five-year-old boy and his teacher were killed at a Beijing kindergarten by an adult intruder.

November 26, 2004 ~ Ruzhou, Henan, China
8 dead, 4 injured ~ Yan Yanming, 21, an intruder stabbed eight students to death and injured four others at Ruzhou's Number Two High School in the sixth such incident in China in a four month period. The attacker attempted to take his own life after the killings.

February 25, 2008 ~ Leizhou, Guangdong, China
3 dead, 4 injured ~ A young man, Chen Wenzhen broke into Leizhou No. 2 Middle School and killed a boy and a girl of Senior Two with a knife and injured four (three students & a teacher) before he stabbed himself and jumped off the fifth floor, dying by suicide.
Posted by Loren Coleman at 10:19 PM

Here's a mixed bag of other rage stabbers/slashers + some other oriental whack daddies:


MARCH 1994
MIDDLESBROUGH, BRITAIN Stephen Wilkinson, 29, stabbed a 12-year-old to death and slashed two other girls before being overpowered by teachers at Hall Garth comprehensive school.

4-20-00
---Stabbing attacks by a 15yr-old in an Ottawa(Canada)-area high school -- on the anniversary of the
Columbine massacre in Colorado -- left five people wounded.

11-25-02
A Kindergarten in Wuchuan City, Guangdong, China
Huang sneaked into the school's kitchen and placed Dushuqiang, a highly toxic rat poison, in the table salt. This morning, cooks used that same table salt to cook porridge for breakfast. Two kindergarten teachers and 70 children fell seriously ill from eating the infected porridge. Huang was arrested and sentenced to death.

6-29-03
Joseph Hunter Parker, 30, killed two people with a samurai sword at an Albertson's supermarket in Irvine, California(Orange County). He was wearing a black trenchcoat and green beret when he was shot to death by police minutes later.

11-24-04
James Lewerke, a 15-year-old student at Valparaiso High School in northern Indiana, pulled two large knives out of his pants and stabbed seven of his classmates. None of the injuries was life-threatening.

4-4-05
Nansan Middle School, Zhanjiang, Guangdong Province, China
A man identified only as Meng lost his job as a carpenter. Meng, in his 30's took out his frustration on the students at Nansan Middle School this today. He broke into one of the classrooms and used a kitchen knife to injure eight students, two boys and six girls.

10-12-05
Niutoushan Primary School, Liudong Township, Guangde, Anhui Province, China
Liu Shibing, 33, opened fire at students with three of his six homemade guns. He was using firecracker powder to fire the guns. After firing each shot, he dropped the gun near the school gate. Liu then proceeded into the school grounds to continued shooting with his remaining three guns. He injured sixteen students.