"I call it the death cult of Columbine," Loren Coleman, author of The Copycat Effect, said to The Chicago Tribune. "It lives on in YouTube, in MySpace, in special sites and in all kinds of ways we might otherwise call inappropriate." 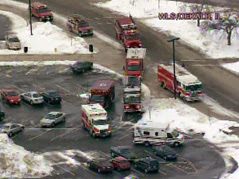 This is the era of a new kind of suicide note, pushed along in cyberspace by keyboards and by texting.

Steve Johnson, the Internet critic of the Chicago Tribune, interviewed me extensively last week about Steven Kazmierczak's presence on the web. We discussed how I discovered more about the NIU killer than was being released in the mainstream press, including his identity, his reviews, his work background, his possible teenage abuses, and other items mentioned here at this blog or others. I talked about how this has created another dimension to the copycat effect phenomenon among school shooters.

Hastily and sometimes harshly written goodbye paper notes by someone dying by suicide, research has shown, have been found to exist only 20% of the time. However, Internet tracks of the suicidal school shooters nowadays seem to be evident in almost 90% of the cases. 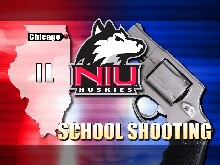 The Tribune's Johnson interviewed other web detectives, of course, about this topic, and his thoughtful column appears in today's paper:

Within hours of the shootings at Northern Illinois University, Web searchers, working from a couple of details in a media account, had correctly identified the gunman as Steven Kazmierczak.

The assailant, who had not been officially identified at that time, was a former vice president of an NIU student organization, according to an article published on the Tribune's Web site after the Valentine's Day murders, and he had co-authored a scholarly paper on self-injury in prison.

It didn't take much work on the Internet to pin those two details to only one person: Kazmierczak, a 27-year-old from the Chicago suburbs who killed five and then himself in an NIU classroom in DeKalb.

Loren Coleman, a Maine author who has written books about suicide clusters and the "copycat effect" in mass killings, thinks the Web may play a bigger role than many people realize. He may have been the first to name Kazmierczak, at 2:59 a.m. Feb. 15, according to the time-stamp on his blog, well before authorities officially released the name.

But what he wrote next was, in a way, more telling.

"I expect an in-depth examination of Kazmierczak's visible Internet life within hours," Coleman wrote in the post on The Copycat Effect (copycateffect.blogspot.com).

And indeed, it happened just like that, because the search for Internet traces has become such a predictable part of the mass-killer story line. They may get rid of their computer's hard drive, as Kazmierczak appears to have done, but most people, especially people of the Internet generation, leave bits and pieces of themselves around the Web.

"Once you're out there, you're out there," said Gary Price, director of online information resources for the search engine Ask.com, "and even the smallest amount of information that you might not even know is out there" can linger forever. In the wake of an incident, anyone with an Internet connection can go looking for the information, and judging by the traffic spikes reported on sites that bear any connection to killings, tens of thousands do.

Seeing such traces for themselves "gives people more of a feeling of immediacy than four or five paragraphs in an AP article. It's a fast way to get some depth in the story," said Steve Huff, an Atlanta-area writer who turned his Internet hobby of researching crime into a writing gig with Radar magazine and a popular blog, True Crime Weblog (truecrimeweblog.com).

A blog, such as Coleman's or Huff's, will publish information about an incident early on; the blog gets cataloged by the search engines and then the "comments" area in the blog becomes an important arena for additional information, ranging from wild speculation and slander to other, reliable links.

The rise of semi-public social networks MySpace and Facebook, where people can chronicle their actions, tastes and desires, has only deepened the trend.

Although much of the Web sleuthing that goes on is very good, Huff raises an important point.

"For a magazine like I write for now, we've got fact checkers," he said. "As annoying as the fact checking is, it's saving your butt. Bloggers don't have fact checkers."

And another characteristic of the Web is that once bad information is out there, it, too, tends to stay out there, believed by at least some proportion of the people who miss subsequent attempts to correct it.

In the Kazmierczak case, for instance, one Web site, People You'll See in Hell, misidentified a MySpace page as belonging to the killer.

"Bad information can get spread very, very quickly," said Ask.com's Price, a leading Internet librarian who also runs the resourceshelf.com site. "You get excited that you found something and then you start spreading it."

While tracking a killer's traces can seem voyeuristic or ghoulish, it is important to pay attention to the Web, Coleman said, because it is also being used to enshrine killers and, he believes, perpetuate their deeds, especially the high school shootings in Columbine, Colo.

"I call it the death cult of Columbine," Coleman said. "It lives on in YouTube, in MySpace, in special sites and in all kinds of ways we might otherwise call inappropriate."

In some cases, he said, the Web becomes part of the homicide-suicide plan.

"The Internet has become really the new way for these people to get the attention they're seeking, the romanticized, really irrational attention," said Coleman. "As opposed to nice, cool suicide notes, they're leaving Internet footprints deliberately as their suicide notes, as their way to be immortal."

Posted by Loren Coleman at 7:38 AM

It is so disingenuous for Coleman to note that magazines have fact-checkers, while bloggers don't--which saves their a**.

Gee, neither do newspapers like the Chicago Tribune. They don't have that luxury of time, either.

Actually, that item about fact-checkers is not a quote from me, Loren Coleman.

If you re-read the Chicago Tribune correctly, you will see it is something said by Steve Huff, the Atlanta-area writer who writes for Radar magazine.

Someone needs to check their facts!