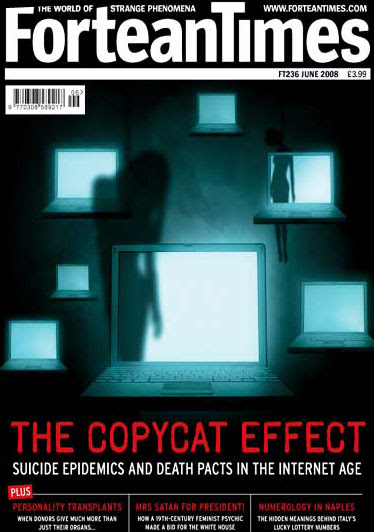 Here's how the editors overview the contents:

This month, in the wake of the recent suicides of young people from Bridgend, South Wales, Jack Sargeant wonders whether some kind of "copycat effect" might be so powerful that it could induce people to end their own lives, while Loren Coleman examines the anatomy of a suicide cluster and Chris Kimberley listens to "Gloomy Sunday", a song supposedly responsible for a rash of self-killings in pre-war Hungary and beyond.

I personally object to the cover art of the hanging images, Jack Sargeant's use of the word "successful" to describe suicides in his article, and the confusion he conveys between "suicide pacts" and "mass suicides." Those are the weak points. To actually have such an overt considering of suicide clusters and the copycat effect is a major plus.- Loren
Posted by Loren Coleman at 7:47 AM