Brian Powell, a former major league baseball pitcher, has died from a self-inflicted gunshot wound, a sheriff's official in Georgia has reported. He was 35. 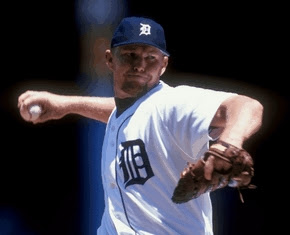 The Bainbridge native was a three-year letterman for the Bulldogs from 1993-95, going 19-14 with a 3.80 ERA. He ranks second in school history with 17 complete games, 352 strikeouts and five shutouts. In 1995, he led the Southeastern Conference in strikeouts (138); innings pitched (147) and was second in complete games (seven).

Powell was a second-round pick, the 41st overall selection, of the Detroit Tigers in the 1995 MLB draft and reached the majors in 1998.

Powell was 7-18 with a 5.94 ERA in 59 games for Detroit, Houston, San Francisco and Philadelphia. He last pitched in the majors with the Phillies in 2004, and spent 2005 in Triple-A for Washington.

Powell is survived by his wife and three children. Our thoughts go out to his family, friends, and former teammates. 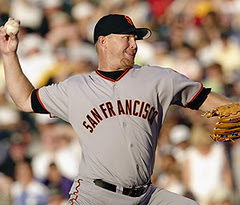 The timing of Powell's suicide, at the end of the regular season of 162 games (despite the one tie-breaker that was played on Tuesday, October 6, 2009), does not appear to be a coincidence.

I wrote the following concerning what my study of such suicides revealed about their timing:

Baseball players were most likely to die by suicide during the off-season, if the individual was a recent player, within three years of an active involvement in the majors, or after age 65, after a "retirement" from a post-baseball career. For some former players, the end of March to the April opening days seemed to be a specific temporal black hole.

That a suicide should occur so close to the end of the regular season should not be a surprise.

Chapters on my findings regarding baseball players' suicides are to be found in Baseball and American Culture: Across the Diamond (2003) by Edward J. Rielly, in my own book The Copycat Effect (2004), and in other sources now quoting those books.

This year, 2009, is the 20th anniversary of my research and call for suicide prevention efforts among Major League Baseball players. There was a cluster of baseball suicides in 1989, which I had predicted. Donnie Moore was the individual MLB player who died of suicide receiving the most publicity, but there, sadly, were others.
Posted by Loren Coleman at 12:45 AM

Depression kills... tragic event. Why do they wait? A sense of duty to the team?

If we knew the "whys" behind the facts of why people wait to die on or after their birthdays, on the dates important to them, on anniversaries, and/or at the point of the other significant milestone markers in their lives, we truly might have some insights into understanding human behavior more deeply.

"Waiting to die," in more examples than suicide victims, is a reality.

With regard to these suicidal incidences, they do have a natural rhyme and reason to them via the harmonics and circadian rhythms that are evidenced in such events.

But knowing that these happen within a relatively predictable timeframe has never truly assisted too many in preventing these suicides, because there is such a high level of skepticism that such an overt form of scheduling actually exists.

That's too bad. There are "dangerous times" each year for some individuals. These times naturally vary, according to each person, but those close to the vulnerable ones just might know what to watch out for and when to be alert.

I am a native of Bainbridge Ga. and knew both Brian and his wife Glee. Not only was Brian a great ball player he was also a great person. No matter how successful he became he was always just Brian to all of us. His fame did not change his personality. We all loved him here in this small South Ga. town. Brian also lost his father about a year ago.
He will be missed by all that knew him.