It is not a coincidence that the balloon that supposedly abducted Falcon Heene to nowhere looks like a flying saucer. Now it turns out, the Heenes are a media-aware family that allegedly may be obsessed with UFOs and ETs. 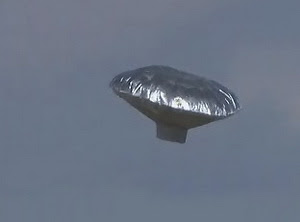 Yes, there is a happy ending. He was hiding in a box in the attic of the family's garage. But the chasing of the balloon dominated the news all afternoon and early evening.

The six-year-old boy who was thought to be in a mylar balloon speeding high across Colorado on Thursday, October 15, 2009, was on the ABC series "Wife Swap."

Falcon Heene, 6, is the son of Richard and Mayumi Heene of Ft. Collins, Colorado. His parents are stormchasers, and their "chaotic parenting style" was criticized by their "Wife Swap" swap family, according to Fox News.

Richard and Mayumi Heene of Ft. Collins, Colorado have two other sons, Bradford and Royo.

The family was invited back by ABC to appear on the 100th episode of "Wife Swap," where Mayumi Heene switched places with Sheree Silver, a psychic.

A Los Angeles Times story documented the "Wife Swap" show by saying "The Heene family, with its three rowdy boys, is anchored by father Richard, whose anger arrives in sudden bolts between his fringe science projects."

The description of the episode from ABC that appears on their website said "[The swapped wife] is shocked as the Heene kids jump off banisters and run wild, and appalled by Richard's attitude to women."

The Heenes reportedly allowed their children to accompany them as they tracked Hurricane Gustav.

According to the ABC "Wife Swap" website, the family sleeps in their clothes so they can leap from bed and run after a storm at any given moment. The site also describes a "flying saucer" that sounds like the one that ultimately came back to earth Thursday.

"When the Heene family aren't chasing storms, they devote their time to scientific experiments that include looking for extraterrestrials and building a research-gathering flying saucer to send into the eye of the storm," says the site. 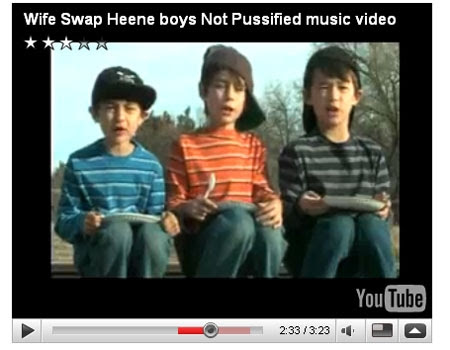 They're also apparently shooting music videos. An amateur rock/rap video called "Not Pussified" starring the three boys was posted on Youtube, showing the brothers shooting off rockets, throwing rocks at stuffed animals, and riding some sort of hovercraft that looks eerily like the saucer thought to be carrying Falcon on Thursday. 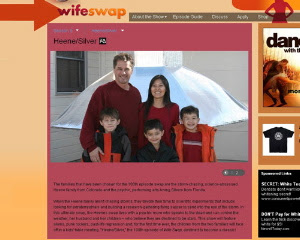 As far as the name game, the history of "Heene" originates from an unknown background.

Posted by Loren Coleman at 6:19 PM

Sigh. I wish at some point during this incident, someone had pointed out that the balloon being chased was only about twelve feet across. I wonder how much lift it has? I doubt enough to carry a small child.

Loren, I knew you'd have a great take on this. Wow. D.B. is right: How stupid to think that this thing could lift the kid to 3,000 feet!

I think we all wanted to be hypnotized.

This story disgusts me top to bottom. It smacks of leaky CIA tactics. Considering they already are networked from an ABC program, they are cannon fodder. Have fun with those MKids!

It doesn't smack of CIA anything to me - what it smacks of is a father/mother team who seek media attention any way they can get it. Last night on Larry King when the boy was asked if he heard the parents looking for him while he was hiding out in the garage, and why he didn't answer - his replay was that he stayed hidden "because you said it was for the show".

This all was nothing but a pathetic hoax to gain notoriety so someone would give them a reality TV show. You can hear this honest little fella answer the question right here:
http://www.youtube.com/watch?v=wI6UONWCq7A

I tend to agree with you, but I also think Orgone Gnosis may be on to something.

Heene has been quoted as saying he believes in "Reptilians." Including Hillary.

Some folks also filmed two fighter jet-style airplanes "following" the balloon when it was till flying.
Godlikeproductions.com has soem threads on that. They also supposedly closed the Denver airport. Over a baloon???

Just saying there might be something more here than just "Eccentric family manipulates kid into lying for publicity purposes" Although I will admit that MIGHT be part of what is going on.
The local sheriff says he is going to reinterivew them in light of the new information coming out.

I am glad the boy is O.K. but I hope it was not a publicity stunt.

I just still can't get over the fact that a handful of young boys did a video called Not Pussified.