J. Patrick Bedell, 36, who attempted to enter the Pentagon on March 4, 2010, not with a pass, but with two 9 mm guns, was a 9/11 Truther, "suicide-is-murder" conspiracy investigator, and more. He has been declared dead, as of the morning of March 5th. The news of the shooting and his suicide-by-cop death is easy to find online.

Bedell left behind his profile at Amazon, as follows:

Nickname: infoeng
Location: Austin, TX USA
In My Own Words:
I'm interested in a lot of things, including: photons, molecules, and their interaction; biomolecular analysis and manipulation; microfabrication; CMOS integrated circuit design; DNA and quantum computing; economics; history; and biography.

The overt investigation by authorities is now centered on California, where he appears to have been in recent weeks. Perhaps he was with his sister, whose address (Hollister, CA) is listed for the delivery of his desired books. Or, as Amazon.com notes: "This Wish List includes a ship-to address, so you can pick out an item and have it sent to J. Patrick Bedell at checkout."

Bedell noted as his hometown that of Austin, Texas, which I'm sure, is getting attention too. It has been discovered that Bedell had a early interest in the 1991 alleged suicide of Marine Col. James Sabow, which Bedell felt was a covered-up murder.

Bedell gave the titles of 55 books on his wish list. Most are conspiracy, historical intelligence, and related books, including the following picks:

and all the way back in time to items such as,

Some seem harder to understand, for outsiders, such as 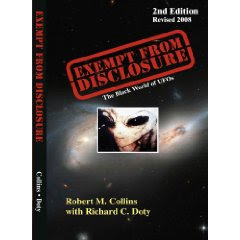 Here is what Amazon passes along from the producers (Peregrine Communications) of this UFO book:

Not made on this Earth:
"You are relating our physics to their crafts - cant do that. That was our mistake for many years. To get into outer space, they use THEIR system. To understand their system, you must understand their physics..."

--A number of named sources some of whom worked at Groom Lake for over 40 years will tell their story of Area 51, and S4.

And, Rick Doty as a contributor confirms many of the stories of Bob Lazar.

--So then, what is the Crystal Rectangle CR according to those DIA TS/Code word documents? Its an H5 Alien Energy Device that can power the ISS, but yet no bigger than a 9 x 12 cardboard box less than 3 inches thick.

--Why is Los Alamos LANL having so many problems with the reverse-engineering, specifically, the anti-gravity two tier propulsion system and materials. The Alien Propulsion System is described in detail.

According to a Top Secret/Umbra 5 November 1961 National Intelligence Estimate NIE propulsion studies were being conducted at LANL.

--From the Roswell Incident of July 1947 where were the recovered artifacts kept at Wright-Patterson AFB?

--EBE-2 & those CIA Secret/Top Secret memos said to be real by a number of sources. Kit Green as a former CIA employee claimed he saw the same type of stationary used for the memos and some of the key acronyms.

--JFK & Mj-12:Two separate sources support the fact that there was an EXCOM Executive Committee, who were also members of 5412 meeting at the time/date specified in the Project Jehovah MJ-12 document which mentions NSA decoding the Alien Codex and the CIAs MJEBEN program.

--The 1991 Government Disclosure effort that flopped.

Also, there is an "About the Author":

Robert M. Collins: A former Air Force Intelligence Officer (Chief Analyst in theoretical Physics) at the Foreign Technology Division (FTD) now NASIC (after three name changes) Wright-Patterson AFB Ohio with an extensive background in Aircraft Avionics Systems, Ground Communications, and Engineering Physics (Electro-Optics, Plasma, and Nuclear Physics) totaling over 22 years. His first UFO contacts were made at FTD starting in 1985 and continue to this day with research and the publication of four book editions of Exempt from Disclosure.

Rick C. Doty: In the spring of 1978 he was recruited by the Air Force Office of Special Investigations (AFOSI) to become an agent. He passed all the necessary requirements and tests and was sent to the AFOSI Academy in Washington, D.C. Successfully graduating from the academy he was sent to District 17, OSI, Kirtland AFB New Mexico in May 1979. During that first year he was briefed into a special program. The program involved the collection of intelligence and counter-intelligence information for UFOs and "other foreign intelligence." Recent accomplishments (along with other "associates") include consulting work for both the X-Files and Spielberg's "Taken."

In actuality, the book has been found by many serious ufologists to be a rambling treatise on such apparent mythical or hoaxed organizations like MJ12 and the mostly discredited tales of Bob Lazar. Indeed, Lazar's critics have pointed out that "Lazar's credibility crumbled" after "schools he was supposed to have attended had no record of him, while others in the scientific community had no memory of ever meeting him." This not-terribly-well-edited book fits into J. Patrick Bedell's wish list well, it seems.

Wikipedia appears to have already taken down Bedell's self-authored page; however Bedell's web footprints are being gathered by some rightwing bloggers who are trying to tie Bedell's actions to a bizarre brand, in their thoughts, of "liberal" mindset (e.g. here, here, and here).

All I can say, at this point, is that I was glad to not see The Copycat Effect on his "wish list." As it turns out, Bedell's actions fit perfectly into the mayhem that has visited this country in the form of "active shooters" since the Ft. Hood shootings.
Posted by Loren Coleman at 6:51 AM

I have a feeling Stack and Bedell are just the beginning of what could be a rash of similar anti-government-related attacks that we'll be seeing a lot fo in the coming weeks and months, maybe years.
Hang on, folks, it's going to get rough...

Mr.Coleman, thanks for addressing this portion of the story. i have to agree with cryptidsrus's remark and things are shaping up to get rough...but also weird. The Amy Bishop shootings also teeter on dark mingling of fringe science investigations and violence. i am sensing a mind control angle coming up in Bedell's saga, but time will tell.

I totally agree with you that Amy Bishop definitely shows signs of mind control.

Her behavior before the shootings and her seeming inability to be arrrested for ANYTHING speak of maybe Government intervention and Monarch (maybe) programming.
My opinion, of course.
I will bet ya she never makes it trial---maybe she will "commit suicide."

attacks that we'll be seeing a lot fo in the coming weeks and months, maybe years.