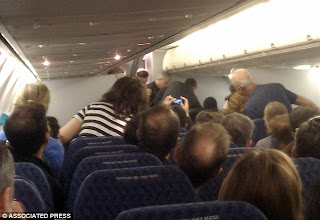 This is the scene aboard American Airlines Flight 1561 from Chicago, just ten minutes before arrival at San Francisco's airport, when a Yemeni man attempted to storm the flight's cockpit.

During the last few days, you may have noticed that people are beginning to share questions like, "Is there something in the air?" or "What's in the water?"
Comments such as those usually alert us to the fact there seems to be a strange trend in the news reflecting outbursts of human behavior or what I like to call, "human earthquakes."
There definitely are periods when humans appear to repeat patterns so similar that the copycat effect, behavior contagion, or some mysterious seismic forces seem to be at play.
Are we in such a period?
First, let us mention the prediction for a massive earthquake occurring today, May 11, 2011. 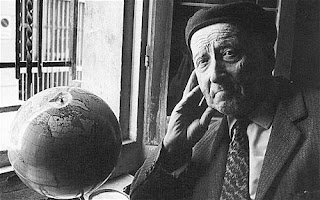 As the earthquake struck yesterday, there was a sigh of relief in Rome, whose residents had mounted a mass evacuation following claims of a 1915 prediction by Mr Bendandi that the “big one” would wipe out the Eternal City on May 11, 2011….“There is absolutely no link between Spain and Italy, geologically, or with the prediction of an earthquake in Rome,” said the Italian National Institute of Geology and Vulcanology.

“The earthquake in Spain was not very strong in itself, but it was close to the surface,” said Alberto Michelini, a seismologist at the institute. “The quake happened on the coast, a zone which has not had strong quakes in the past. It is close, however, to the point where the Eurasian plate meets the African plate,” he added.

Meanwhile, what about the human earthquakes?

What is remarkable is the rather high number of incidents of strange human bizarre behaviors of late. Such outbursts are often associated, in the public mind and media, with some form of lunacy, i.e. as if they are caused by the full moon, the new moon, an alignment of planets, or earthquake activity (which, in turn, is blamed on the moon/planets, as well).
The following is a quick roundup of some of these recent incidents.
The one that received the most media notice involved an event that appeared to remind people of the 9/11 scenarios, and, indeed, was frightening to those abroad the involved flight. Rageit Almurisi, 29, a Yemeni man screamed "Allah Akbar" as he stormed the flight's cockpit. He banged on the cockpit door on American Airlines Flight 1561 from Chicago, just ten minutes before the jet was due to land on Sunday night, May 8, 2011. A flight attendant tackled the man to the floor, and the attendant was soon assisted by other passengers.


The incident was another scare during a weekend that saw several similar ones for American air passengers and followed a number of security alerts at bus and train stations and airports across America, following the death of Osama Bin Laden:
A man slipped into the PATH tunnel at the World Trade Center in New York and walked all the way to Jersey before saying he had left a bomb in the tunnel;
A gunman who shot two Houston officers outside a downtown Greyhound bus depot was confirmed dead;
Police blocked off several streets in the Bronx, New York, as the NYPD bomb squad investigated a parked SUV;
The Mockingbird DART station and the surrounding area in Dallas, Texas, were evacuated on Saturday after a police dog alerted authorities to suspicious packages;
Four people were arrested at Denver International Airport after staff noticed someone videotaping security lines;
A 34-year-old Illinois man went berserk aboard Continental Airlines Boeing 737 from Houston to Chicago and tried to open the door at 35,000ft, but a Vietnam veteran and martial arts expert tackled him from behind;
A Delta Air Lines flight from Detroit to San Diego was diverted to Albuquerque, New Mexico, after a flight attendant found a note in the lavatory with the word "bomb." FBI agents ushered the passengers and crew to safety;
A woman stripped naked on a Delta flight;
A half-naked man in Fayetteville, Arkansas, died when a falling incident occurred;
A naked man went berserk on a subway; and
On Tuesday night, May 10, yet another man, this time on a Delta flight, attempted to open an exit door.
More probably will follow.
Posted by Loren Coleman at 2:15 PM

I'm surprised you didn't mention "The Little Fey One" and the half-naked man in Fayetteville...

The Fayetteville incident is most certainly posted above. :-)