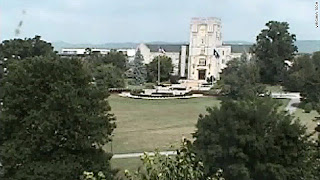 Here are the bulletins coming out of Virginia Tech this morning, August 4, 2011, according to CNN:

[Original post, 10:18 a.m.] Virginia Tech, the site of a 2007 massacre, has issued an alert saying someone is possibly carrying a weapon on campus.
Regular classes aren't in session at the moment, but there is summer school. The university in Blacksburg, Virginia, is asking people on campus to stay inside and secure doors. The person was spotted near Dietrick Dining Hall.
In April 2007, Cho Seung-Hui, 23, shot dead 32 people on campus before killing himself.

[Update 10:31 a.m.] Virginia Tech is in lockdown as authorities look for a man three youths said may have had a weapon, possibly a handgun.
The white male was described as having light brown hair and being 6 feet tall and was walking in the direction of a volleyball court. The man was wearing a blue and white striped shirt, gray shorts and brown sandals. He had no glasses or facial hair, according to the report.
[Update 11:09 a.m.] No one is in custody and the campus safety alert remains in effect, Virginia Tech's campus police chief says.
[Update 11:16 a.m.] Virginia Tech Police Chief Wendell Flinchum warned students and others to continue to stay indoors as they search for a person who may be carrying a weapon on campus.

Several people have been questioned but police have not apprehended anyone, Flinchum said. 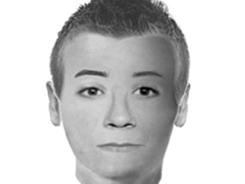 The suspect was described as 6 feet tall with brown hair, wearing a blue-and-white striped shirt, gray shorts and brown sandals.
Posted by Loren Coleman at 11:37 AM