Korea's 9/11 Twin Towers: What Were They Thinking? 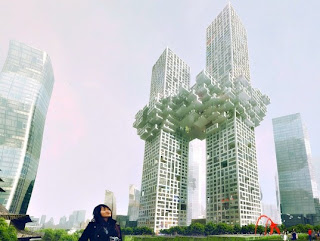 Will these two buildings appear in Seoul, South Korea in 2016? What were the people that put together these plans thinking? A mere coincidence? The twilight language working overtime in a Dutch firm? What's going on here?


South Korean developers may be backing down from plans to erect two luxury apartment buildings that some say resemble the World Trade Center buildings exploding as they were hit by planes on 9/11.


The building design had been pitched by Dutch architecture firm MVRDV for erection in Seoul, South Korea.


But according to new reports, the design is on hold now.


After the uproar online and beyond, telling of the controversy about the design of the buildings, MVRDV issued apologies on its website and Facebook page. The Facebook entry reads as follows:

A real media storm has started and we receive threatening emails and calls of angry people calling us Al Qaeda lovers or worse.

MVRDV regrets deeply any connotations The Cloud projects evokes regarding 9/11, it was not our intention.
Posted by Loren Coleman at 2:40 PM

Perhaps it continues the idea that 'planes flew into the building while there were absolutely no underground explosions.

The whole idea that a firm of international architects are not aware of the Twin Towers , or perhaps just let that imagery slip from their mind, is wholly facile.

Perhaps the arcitects of 9/11 should sue for copyright infringement

I commented on this on a Design blog.

Personally, I don't like the concept for the building.

But I also don't like how apparently next time you come with a project, you'll have to submit it to some kind of international evaluation board, to ensure it will not be offensive to anyone anywhere.

I'm probably going to regret writing this, but frankly, if 9/11 had happened in Mexico, after 10 years we'd be laughing about it by now —the same way we make jokes about everything, like the war on drugs or even the brutality of drug cartels— But since it happened in America, I guess we won't be allowed to forget it or stop taking it seriously. Ever.

With some exceptions, today's architecture is a megalomaniac representation of power by the "developer" and egocentric extravaganza by the "starchitecs".
In the case of Korea's 9/11 Twin Towers, the "starchitecs" just crossed over to the realm of insanity.
They have to be sick.