What will be the result of the Boston bombings?

Has one outcome been a cookbook for future disasters?

The following images were spread all over the papers, Internet, and cable television news - wall to wall. I am purposefully making the images so small so that the instructions for "how to make a bomb" will not be readable, as they have been since April 15th. 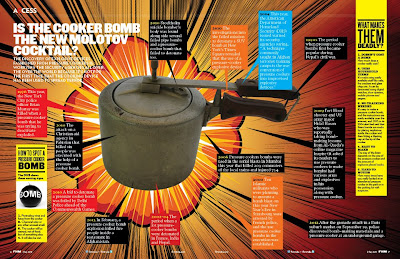 In 1989, when Simon and Schuster published my Suicide Clusters, no one believed that phenomenon existed. In 2004, when my book The Copycat Effect was released, only one newspaper in North America reviewed it. The Boston Globe ran a skeptical critique. The media wanted my book to be ignored.

Today, it is rather firmly established that the "copycat effect" is part of the way that future events are being programmed.

What do you think will be the legacy of the Boston bombings? At sporting events? And large gatherings? Using what instrument of mass destruction?

Certainly the loss of life and the massive injuries to the individuals during the Boston Marathon bombings have to be addressed as now copycats will sadly probably occur.

Moves in the direction of future prevention are in the works.

The Kentucky Derby will ban backpacks during the running races held in conjunction with the horse race:

Officials with the Kentucky Derby announced that backpacks would be banned at the Marathon and miniMarathon held in conjunction with the Derby itself, in an effort to tighten security.
The Louisville Courier-Journal is reporting that festival president Mike Berry and vice president Matt Gibson made the announcement during a press conference held on Tuesday. Other banned items include duffel bags, purses taller or wider than 12 inches, luggage, tents, coolers and weapons.
Instead of backpacks, runners will have to bring any necessities in transparent bags.

According to Churchill Downs, backpacks had been previously banned from the Kentucky Derby and Oaks themselves in 2012. Coolers, noisemakers, pepper spray, fireworks and purses larger than 12 inches were recently added to this year’s list of prohibited items. Also banned are cameras with detachable lenses, cameras equipped with lenses more than six inches in length, and tripods of any kind. Source.


Stadium operations officials from the 30 big league baseball teams will meet this week and are expected to discuss whether to make any security changes in the wake of the Boston Marathon bombings…Among the security topics that could be discussed are backpacks that fans bring into ballparks. 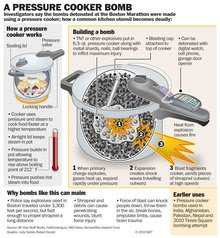 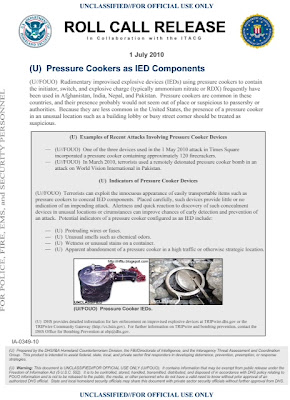 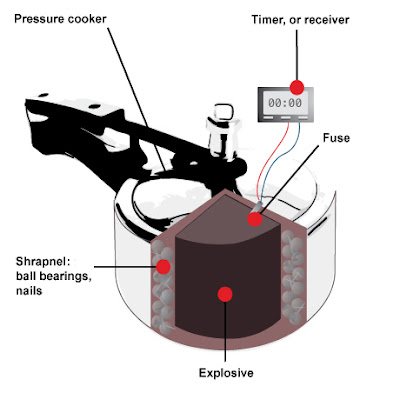 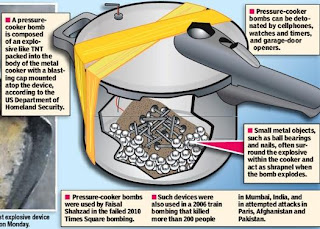 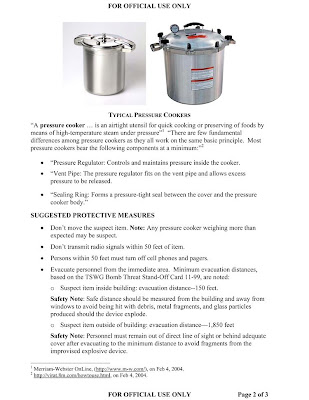 Posted by Loren Coleman at 9:57 AM

Pressure cookers probably will be voluntarily taken off the market by retailers and cookware manufacturers, at least for awhile in the US.

I was thinking of buying one, but since they can be dangerous even for their intended use (remove the cover before the steam pressure fully dissipates and kaboom, blazing hot food all over you and the kitchen) I had been hesitating. Now, I've decided to pass on buying one.

A bomb with a handle - kinda reminds me of the old German "potato masher" grenades, though they would be impractical to throw.

I can't say that we'll see more pressure cooker devices, though I'm sure the less imaginative will gravitate back to this design. What then? Will they be kept behind the counter, the way certain drugs used to cook meth now are? I see no way to redesign them and make them somehow less useful to the bombers. Will they need to be registered? Doubtful, but they will no doubt be added to lists of Red Flag items on credit card searches. My impression of these pots is that they are used to make the less savory cuts of meat palatable, or to cook in high altitudes. How does one discern the poor guy mile-high in Colorado who can only afford the gristly flank for dinner from a potential troublemaker? Thankfully, this is but one tile in a larger mosaic.

The potential financial liability to any manufacturer or seller of a pressure cooker that might be inadvertently identified as being used in a bombing will take these off the market post hoc.

I'm sure that retailers and manufacturers are already consulting with their lawyers about limiting damage claims from weaponized cookers. Just imagine the suits asking for billions in damages if a weaponized pot is tied to a seller and manufacturer.

There is no powerful pressure cooker lobby to buy off the US Congress into protecting this product. The withdrawal will be a voluntary act of self-protection.

If you want a pressure cooker, you'll have to start regularly scouring yard sales and hope to get lucky. That, in itself, will become a suspicious activity, especially if you become a familiar figure at these sales looking for pressure cookers.

I remember back in the 1970's there were a rash of pressure cooker explosions - kitchen accidents. I thought they might be taken off the market then. Maybe they were redesigned so the pressure release valves wouldn't get stuck as easily, or whatever was causing the problem.

Pressure cooker was symbolic. Part of the spell. As were the ricin letters that followed. And from what I can tell it worked like a charm.

" The body of a young man pulled from a river in the US state of Rhode Island has been formally identified as the university student who was wrongly identified as a Boston Marathon bombing suspect by amateur online sleuths."