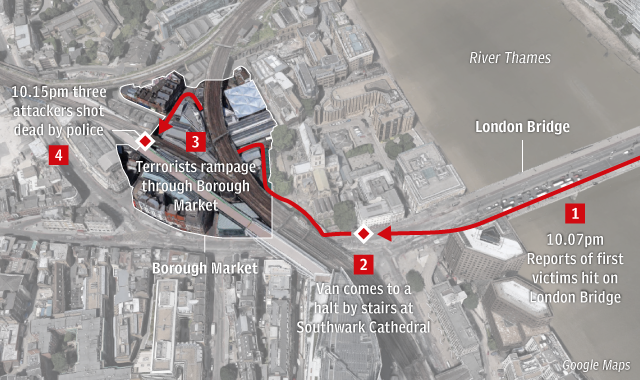 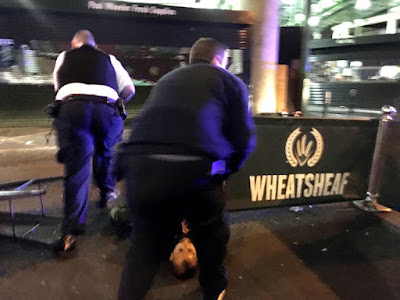 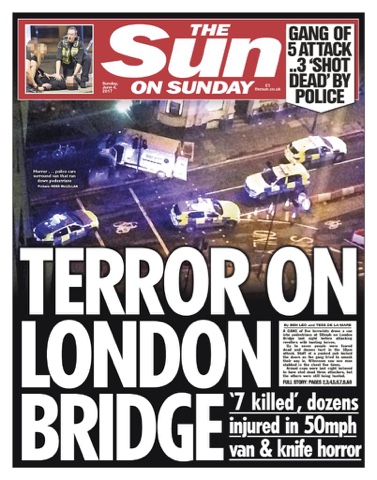 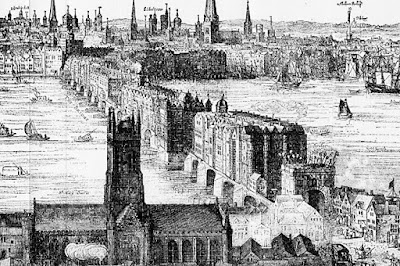 A white van mowed down pedestrians as it sped down London Bridge in the British capital on June 3, 2017, Saturday night, leaving bodies lying in the roadway, knocking people into the air, and forcing people to jump off the Bridge. 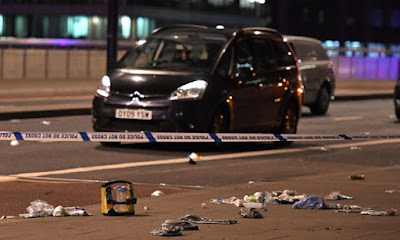 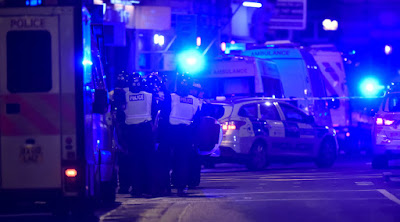 "It looked to me that the van was aiming at the people," a witness tells CNN.

A witness reported the attackers screamed "This is for Allah." 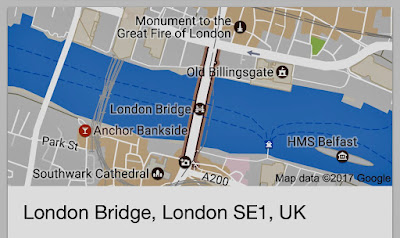 Concurrently or shortly after the London Bridge incident on June 3, 2017, Saturday, three men entered a restaurant at Borough Market, just south of the Bridge, and stabbed four people inside. The patrons sheltered in the basement.

Both incidents have been declared terrorist incidents. 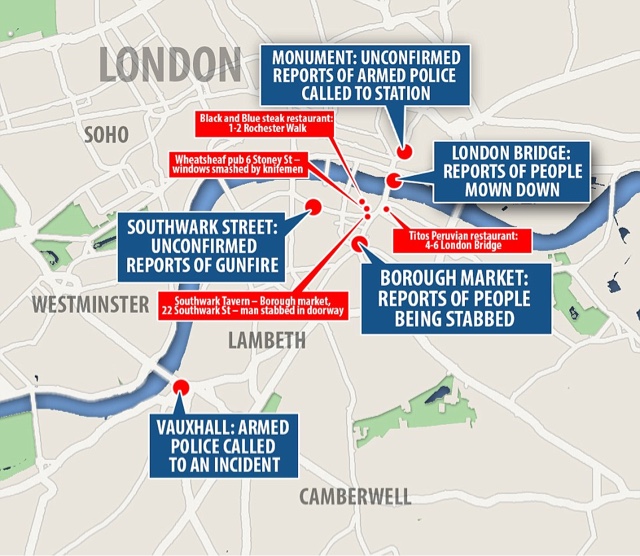 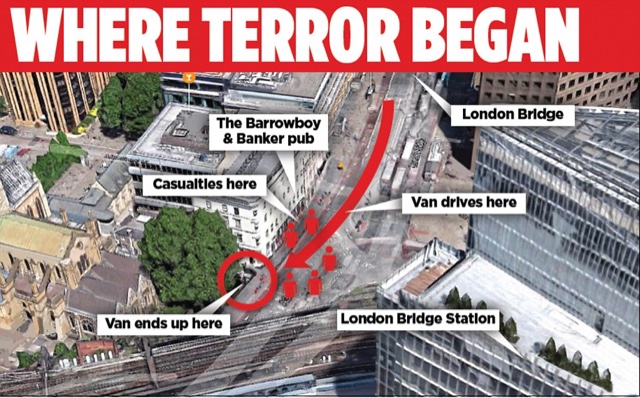 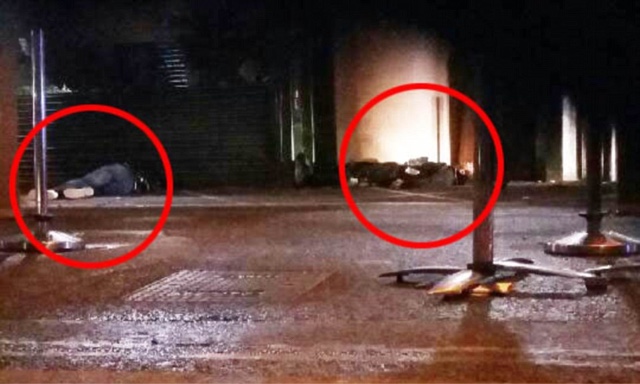 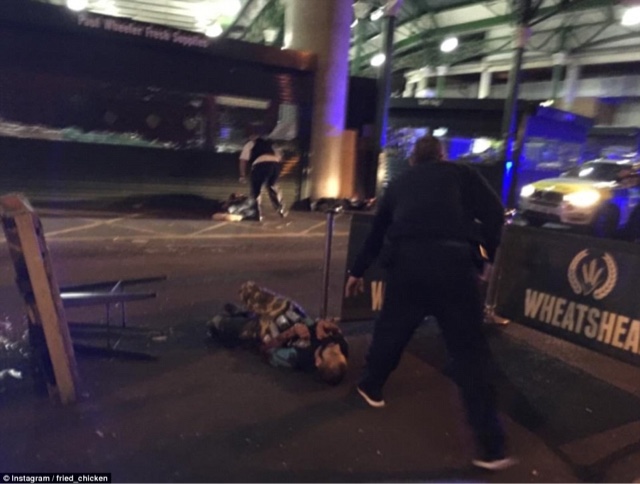 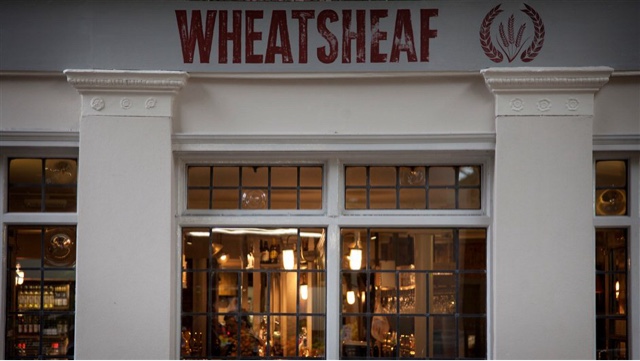 On this night, June 3, 2017, the planet Jupiter is very apparent in the sky, only a few degrees from the Moon. 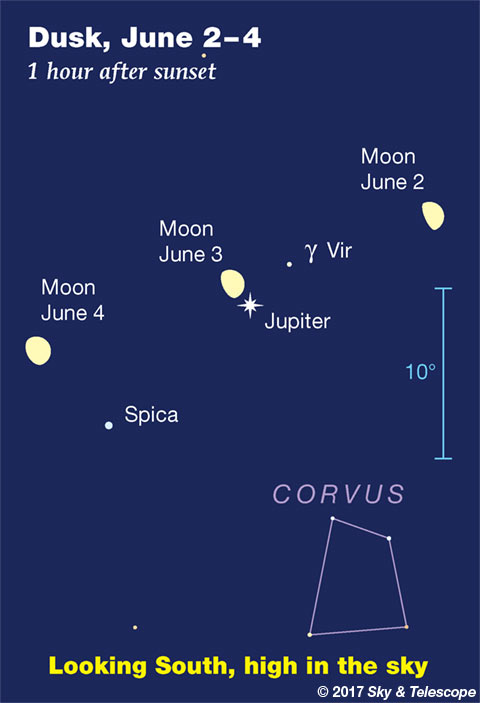 Sky & Telescope details what is happening with Jupiter tonight in these words:


Saturday, June 3
• Jupiter is the bright "star" with the Moon, as seen at right. They're only a couple degrees apart as viewed at dusk from North America. But Jupiter this evening is 1,860 times farther away.
• Lower left of them is Spica. Much closer to them in the opposite direction is fainter Gamma (γ) Virginis, a close double star for telescopes (separation 2.6 arcseconds this year).
• And, a double shadow-transit occurs on Jupiter tonight. From 10:22 p.m. to 12:22 a.m. EDT, both Io and larger Ganymede are casting their tiny black shadows onto Jupiter's face.
• And then, Jupiter's Great Red Spot transits the planet's central meridian around 12:55 a.m. EDT (9:55 p.m. PDT). Quite a telescopic night for this little group of objects.

Another Jupiter directly clashed with London Bridge. On June 13, 1984, as the HMS Jupiter was leaving the Pool of London after a visit to the capital, she collided with London Bridge causing significant damage to both ship and bridge. The ship's Captain, Commander Colin Hamilton, was later court martialed at Portsmouth on December 4, 1984.

On June 3, 1982, the Israeli Ambassador to the Court of St. James's, Shlomo Argov, was shot outside the Dorchester Hotel by three gunmen from the Abu Nidal group. The ambassador survived a three-month coma, but was paralysed and required constant medical attention until his death in 2003 as a result of the wounds. See other "Terrorist Incidents in London" here.

The first bridge near this site was built in about AD 50, probably by the Romans. This version of the London Bridge was begun in 1971, and first opened on March 17 (Saint Patrick's Day), 1973, a little over 44 years ago.

The lyrics to a children's song, perhaps as old as the Late Middle Ages (circa A.D. 1301–1500), has made the London Bridge famous around the World.

At top, an engraving by Claes Visscher showing Old London Bridge in 1616, with what is now Southwark Cathedral in the foreground. The spiked heads of executed criminals can be seen above the Southwark gatehouse.
Posted by Loren Coleman at 9:12 PM

On the same evening, in Turin, Italia: https://www.theguardian.com/football/2017/jun/03/juventus-fans-injured-turin-square-panic-firecrackers

Look into the mythology here
https://en.wikipedia.org/wiki/Corvus_(constellation)

Corvus is associated with the myth of Apollo and his lover Coronis the Lapith. Coronis had been unfaithful to Apollo; when he learned this information from a pure white crow, he turned its feathers black in a fit of rage. . . . . He further punished the wayward bird by ensuring it would forever be thirsty, both in real life and in the heavens, where the Cup is just out of reach.