Clinton, Indiana, was the site of a Joker-copycat attack at a South Vermillion High School on January 29, 2009. This comes in the wake of the Dendermonde Joker incident of January 23, 2009, in Belgium.

The Vermillion County Sheriff's Department reported a 17-year-old female student went to the bathroom where she painted her face to look like “The Joker.” She also made cuts on her face with a knife that she had hid in her backpack. 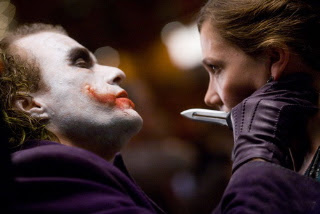 “She was attempting to attack a teacher in a classroom,” said Chris MacLaren, a deputy with the Vermillion County Sheriff’s Department. “The class was already in session and the student rushed in the door and pulled the knife out” and tried to attack the teacher.

The teacher used a cart to keep the student at a distance, and all of the students were able to escape the classroom safely.

Eventually school staff was able to convince the student to put down the knife.

No one was injured in the incident, which occurred at about 1:50 p.m.

McLaren estimated the incident lasted about five to 10 minutes.

He described the knife as a steak or carving knife with about a 5-inch blade. The student had kept the knife, and two other (small folding) knives, in a bag, MacLaren said.

The school was placed on lockdown until the end of the school day, and the student was taken to the Vermillion County Sheriff's Department where she was questioned. Charges were pending against the student. The Sheriff’s Department was consulting with the county prosecutor to determine whether the case should be pursued in adult or juvenile court, MacLaren said.

(Later in the day, a student went online and posted specific details of the attack. This individual has now requested - well, actually through threats of "pressing charges" - for sites to take his or her quotations down from blogs. Those sourced statements have now been removed here too, not because of the legal threats but because the individual seems to have placed their material online without any awareness that it obviously would be read and copied. Everyone can make foolish mistakes like this, once or twice.)

Several primary media sources were consulted to confirm this event, which did, indeed, involve a Joker copycat event, here, here, and here.

Clinton is a city in Vermillion County, Indiana, United States. The city is named after DeWitt Clinton (March 2, 1769 – February 11, 1828), who served as 6th governor of New York from 1817 to 1823, and was responsible for the building of the Erie Canal (at the time called "Clinton's Ditch").

Clinton, Indiana is the birthplace of Colonel Charles Edward ("Chuck") Jones (November 4, 1952 – September 11, 2001), a United States Air Force officer, a computer programmer, and an astronaut in the USAF Manned Spaceflight Engineer Program, who was killed in the attacks of September 11, 2001, while aboard American Airlines Flight 11, when it hit one of the Twin Towers.

Full credit and thanks to Behemoth blogger Ben Fairhall for sending along the initial alert on this event.
Posted by Loren Coleman at 3:26 PM

Its name is derived from the French vermeil which was used to mean any red dye, and which itself comes from vermiculum, a red dye made from the insect Kermes vermilio. The words for the color red in Portuguese (vermelho) and Catalan (vermell) derive from this term.'

Cinnabar was one of the primary ingredients used by Taoist/Daoist alchemists some 2000 years ago. One of their goals was to transmute the cinnabar into an elixir which would give immortality.

I was about to watch 'Batman: The Dark Knight' for the first time tonight - I bought it on DVD the day it came out, but can't bring myself to watch it.

I went to this high school, and graduated in May 2008. I knew Blair, and she was an outstanding student. She was active on DT and made good grades. She was always very quiet though. She always worried me because she was almost too quiet. I never though something like this would happen in my hometown, and as soon as my little sister called me with the news I was in awe.

Blair was an amazing student who was involved in many activities. She had a good life and no clear reason for what she did, there is clearly something mentally wrong with her. I sat for an hour and a half in lock down with Blair's friend. He sat shaking, nearly in tears of worry and a misunderstanding of what had just taken place. No one expected this to happen, especially by her. The rude comments that are extremely disrespectful won't stop, and I can't stand it. I feel aweful for her friends. Many blame themselves because they think they should have known something was wrong, but no one expected her to do something like that. Can you immagine, your friend just tried to attack a teacher, the same friend you just ate lunch with, the same friend you hang out with after school, the same friend you just dance with at a basketball game? Now her life is ruined. Even if they prove it wasn't her fault, that something was mentally wrong, causing her to do something, she can't come back to school. There has to be something extremely wrong with her for her to throw away a life that was, as far as everyone knew, going so well. I pray Blair get's help, and that her friends will get to see her. You can't imagine that sadness I went through when I had to explain to her friend that she can't come back and you can never again spend time with her like you used to.

Here's one for you atAmazon....now they can buy Joker ski masks.