Occasionally genius is misunderstood, and every death like the one described here is not suicide-by-cop.

Miles Allen Murphy was a bright, eccentric man, who sometimes dressed in historically correct uniforms and clothing. He was shot dead on January 1, 2009, because Seattle police felt threatened by his actions.

If the facts are as stated, Murphy appears to have acted irresponsibly while celebrating the New Year, and law enforcement officers were placed in an untenable position.

Nevertheless, the tragedy is widespread, for Murphy's family, the police personnel, and their families.

Nick Perry and Emily Heffter, reporters for the Seattle Times, have written a comprehensive essay on Murphy's death: 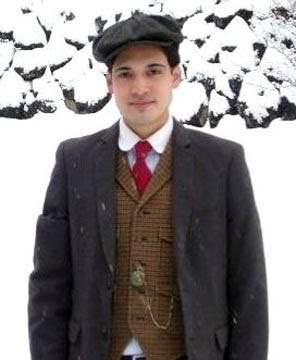 Seattle police shot and killed a University of Washington senior who was dressed in a World War II-era German uniform and who officers say was brandishing a long rifle with a bayonet early Thursday [January 1, 2009] in his University District apartment.

The student, identified by friends as Miles Allen Murphy, was well-known on campus as a smart, eccentric history buff who loved to participate in WWII re-enactments and would even show up to class, at times, dressed in a historic uniform.

Friends said Murphy, 22, would entertain at parties by playing everything from old German folk songs to Britney Spears tunes on his accordion.

Murphy was killed about 2 a.m. Thursday when police responded to neighbors' complaints that several men were shooting vintage, military-style rifles and shotguns into a dark alley near the 5200 block of 17th Avenue Northeast, police spokesman Jeff Kappel said.

When police were called, Kappel said, neighbors pointed out an apartment in a large white house. When police knocked on the door, one of the suspects opened the door brandishing a long rifle with a large bayonet attached.

Uniformed police officers warned the man several times to drop his weapon. He didn't, Kappel said, and he pointed it at one of the officers. Two officers shot him several times. He died at a hospital Thursday morning, Kappel said.

Spencer Bray, a UW senior, was one of about 20 friends who gathered Thursday night to share stories about Murphy. Bray said Murphy — a German cultural-studies major — had amassed a large collection of WWII memorabilia from the Internet, goodwill stores and from antique dealers.

"He was one of the most peaceful guys I have met. He was really just a nice guy," Bray said. "I never heard him espousing any Nazi ideology; none of that interested him. He liked the physical stuff from WWII because he was such a history buff."

Bray said Murphy sometimes would wear kilts or uniforms to class — including German and U.S. gear from WWII — but would make sure the outfits didn't have symbolic additions such as swastikas.

"He had this Russian snow coat that he'd been wearing recently," Bray said. "It was military issue from WWII."

He said Murphy spoke good German and Swedish, as well as some Finnish, and wanted to be a professor of German literature.

"He was eccentric, but he was very well-liked," Bray said. "It's a huge shock. I read the news today and ... it was really, really hard to hear for all of us."

Murphy worked part time at Red Mill Burgers on Phinney Ridge, Bray said, and always would tip well when he ate out as a result of his experience in the hospitality trade.

On the social-networking site MySpace, Murphy wrote, in a joking fashion, that he lived in a 1920s room and only entered the 21st century when "absolutely necessary." He wrote that he collected vintage clothes and never turned down a well-mixed martini. He listed "Mr. Bayonet" as his lucky charm and said he was "kind of impulsive."

Bray recalled one party when Murphy entertained the crowd on his accordion with everything from old folk songs to "Les Miserables." Murphy also could play piano, violin, banjo and guitar, his friend said.

"He could figure out just about any song on any of the instruments that he played," Bray said. "It was really cool. It was fun to have him play and sing."

The shooting took place in a quiet neighborhood of large homes near the university.

The man who lives in the apartment next door, Mark Kedziora, said that before Thursday night he hadn't seen his neighbor wearing a full German military uniform, but said the man wore a black mustache, combed-over hair and military boots.

Kedziora said he saw his neighbor and two other men with guns standing in the alley at about 1:30 a.m. Thursday. He looked outside when he heard a loud bang, thinking the guns were fake. But when he watched the men reload, he realized the guns were real and said to his friend, "That guy's an idiot."

One of the men was wearing an olive uniform and a military helmet, Kedziora said, and his neighbor was wearing a Nazi military uniform.

"I didn't know he had the whole get-up," he said. A third man was wearing street clothes. It wasn't clear if either of the other two men live at the apartment.

Kedziora said he heard confusion outside and could hear police warning the man to drop his weapon. A few minutes later, they watched out the window as the wounded neighbor was taken away and SWAT teams searched the neighborhood.

Police searching the apartment after the incident found the large collection of German military regalia and a lot of alcohol, Kappel said.

At one point, police evacuated the building, waking tenants.

A few scraps of yellow police tape remained in the alley Thursday afternoon.

No one answered the door at the apartment where the shooting occurred, although the lights were on. Cardboard partially covered a pool of blood on the landing outside the door.

The police officers who fired at the man are on paid administrative leave, which is standard procedure.