The sinking of the Maine on February 15, 1898 precipitated the Spanish-American War and also popularized the phrase Remember the Maine, to Hell with Spain! It became as well-known as the battle cry Remember the Alamo!

The cause of the explosion that sank the Maine remains an unsolved mystery. 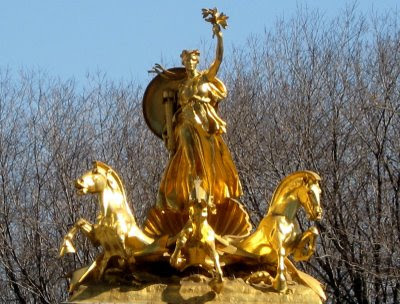 Christopher Knowles' Secret Sun blog mentions today New York City's Maine Monument. Knowles made me a bit curious about the placement of this highly significant piece of Masonic art, especially as it is connected to the name of my resident state. Since I did a little digging on this, I figured I would share some of this here with you.

This monument is clearly Masonic. In the article about the initial construction, in the February 16, 1912 issue of the New York Times, it says,

"Just fourteen years after the destruction of the battleship Maine in Havana harbor, and thirteen after the inception of the project to build a monument in commemoration of the 266 sailors who perished in the disaster, the cornerstone of the Maine Monument was laid yesterday afternoon at the Columbus Circle entrance to Central Park, facing the Columbus Monument."

The rite of the laying of the cornerstone was conducted by Admiral Loutzs with a group of Masons. 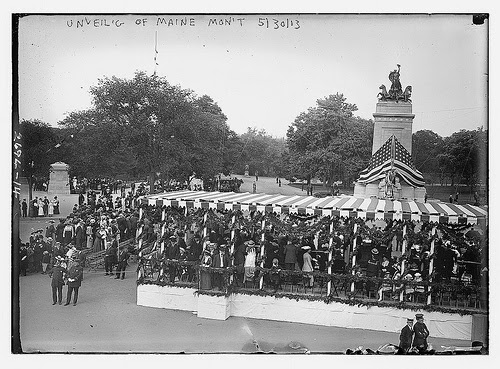 Columbus Circle's Maine Monument is dedicated to the 260 sailors killed when the battleship Maine was sunk in Havana harbor in 1898. It has atop it, cast in bronze from guns recovered from the Maine herself, a female figure, Columbia Triumphant, symbolizing American sea power and embodying in sculpture the thesis of a then-popular book, Alfred Thayer Mahan's The Influence of Sea Power upon History.

As Chris Knowles writes, it is William Phelps Eno (1858-1945) who is responsible for the overall design of Columbus Circle, and as Knowles also notes, and Wikipedia puts bluntly, Eno "graduated from Yale University in 1882, where he had been a member of Skull and Bones." Eno furthermore designed roadways in London and the circular traffic that runs around the Arc de Triomphe in Paris. 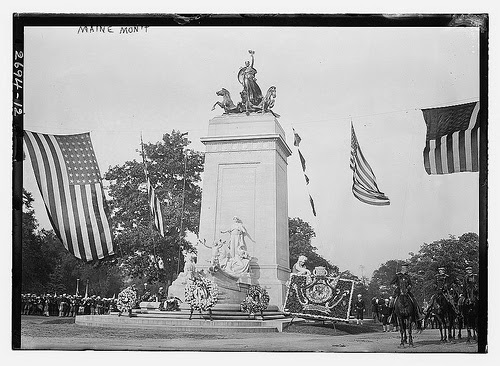 The Maine Monument stands at Merchant’s Gate, a park entrance named in 1862 to recognize the importance of commerce and business in New York City. The monument honors the 258 American sailors who perished when the battleship Maine exploded in the harbor of Havana, Cuba, then under Spanish rule. The causes of the February 15, 1898 explosion remain unclear, but by April of that year, Spain had declared war on the United States.

The Spanish-American War ended in December of 1898 with the signing of the Treaty of Paris. This agreement, a landmark in the United States’ rise to international power, released Cuba from Spanish rule and ceded Guam, Puerto Rico, Hawaii, and the Philippines to the jurisdiction of the United States. Cuba, nominally independent after the war, was forced to include a clause known as the Platt Amendment in its new constitution. This amendment allowed the United States to ‘protect’ Cuba whenever Congress was of the opinion that the new republic was experiencing a threat to its sovereignty. By effectively negating that sovereignty, and by the brutal suppression of the independence struggle in the Philippines, the United States ended the Spanish-American War much enhanced in territory, trade, and prestige.

The war brought rewards for the state, but quoting the words inscribed on the monument itself, the “valiant seamen who perished on the Maine by fate unwarned, in death unafraid” were mourned by the entire nation. Four days after the Maine went down, newspaper publisher William Randolph Hearst’s New York Morning Journal called for a public collection to honor the sailors with a monument. Over the course of several years, the newspaper received monetary gifts of all sizes, from large grants to thousands of dollars worth of pennies collected from schoolchildren.

Hearst first considered the mouth of New York Harbor as a fitting site for a monument to sailors. He wrote that, “A monument standing at the mouth of the Narrows, looking out over the ocean, would form a memorial worthy of the brave fellows who died while on duty for their country.” The site eventually chosen for the memorial was Longacre Square (now Times Square), the present location of the midtown TKTS booth. Through some “clerical oversight,” however, the designers discovered that a comfort station had been hastily built on the designated spot. When the architects started looking around for another site, the obvious choice was the Merchants’ Gate, where the memorial would provide a balance to the monumental column of Columbus Circle, erected in 1892.

H. Van Buren Magonigle and Attilio Piccirilli were chosen to design and sculpt the massive monument. Sculptor Piccirilli and architect Magonigle also worked together on the Firemen’s Memorial in Riverside Park at West 100th Street. Attillio and his five brothers operated a studio in the Mott Haven section of the Bronx where they modeled and carved their own work and also carved for other artists some of the nation’s best-loved works, including the Library Lions at 42nd Street and Fifth Avenue, portions of the Washington Square Arch in Greenwich Village, and Abraham Lincoln at Washington, D.C.’s Lincoln Memorial. Designed by Magonigle and created by Piccirilli, the monument is rich in allegory and symbolism. Atop the center pylon rides the bronze figure of a woman, Columbia Triumphant, drawn in a seashell chariot by three sea horses. This martial group is cast in bronze recovered from the guns of the Maine itself.

In the front of the tall shaft is an allegorical group arranged in a ship configuration, entitled The Antebellum State of Mind: Courage Awaiting the Flight of Peace and Fortitude Supporting the Feeble. The youth at the prow of the ship holds his hands in the sign of the Victory that he represents. Recumbent figures at the side fountains represent the Atlantic and Pacific, while those at the rear represent The Post-Bellum Idea: Justice Receiving Back the Sword Entrusted to War. The names of those who died on the Maine are inscribed on the pylon above the oceans, while all over dolphins, seashells, and sea creatures bring a unity of decoration to the complex allegorical composition. The sculptural program figuratively reflects America’s new position as a dominant world force just as the imposing Beaux Arts structure itself symbolizes the American conception of the bold and grandiose domination of space. 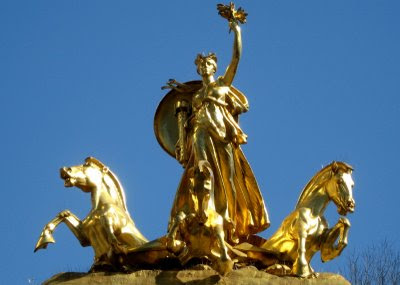 In New York City, this Maine monument's lady Columbia Triumphant, of course, is overshadowed by Liberty Enlightening the World - the Statue of Liberty in New York Harbor. Dedicated in 1886, Frédéric-Auguste Bartholdi's copper statue, a deeply symbolic gift from the people of France, is without question the most famous public sculpture in the United States, perhaps in the world. The form of "Lady Liberty" is Roman, though with a superb transmutation of symbols. Where, for example, the expectation is this classically gowned female would be holding a scepter, instead, she grips the Torch of Enlightenment - of Liberty. Her crown, with its seven points, represents the seven continents. In her left arm she cradles a tablet, said to be of Masonic origin, inscribed with the date July 4, 1776.

The hidden is in plain sight.

Email ThisBlogThis!Share to TwitterShare to FacebookShare to Pinterest
Labels: Maine

Awesome, Loren- thanks for the background.

Columbia has another name: MAYA

Columba and Lady Liberty are depictions of the same Babylonian goddess Semiramis are they not?